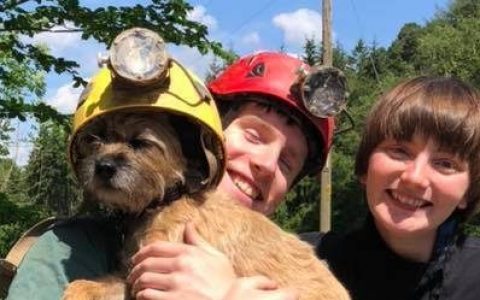 Trip members: Nat, Tom, Jethro, Helen, Me The June weather Gods had blessed us with a sunny weekend, which we decided to spent camping out in Robin Hood’s Bay. While we were in the area we planned to visit “The Only Cave Worth Visiting On The North York Moors™”; Excalibur Pot. Permits, surveys, descriptions, and […]

The June weather Gods had blessed us with a sunny weekend, which we decided to spent camping out in Robin Hood’s Bay. While we were in the area we planned to visit “The Only Cave Worth Visiting On The North York Moors™”; Excalibur Pot. Permits, surveys, descriptions, and ropes were gathered and we headed out to the glorious East Yorkshire coast on a rare sunny weekend ready for a day underground.

After spending the morning negotiating campsite costs with a confused owner (they didn’t like us rocking up late at night and pitching wherever we could find a space, which turned out to be the “family field”) we drove an hour away from the coast in order to go caving. It’s fair to say that some of our party weren’t too happy with spending the first hot day since the inexplicable February heatwave traipsing round a dismal N Yorkshire pothole.

Regardless of any complaints (and believe me, there were many) we pulled up in the lay-by and kitted up. The 5 of us due to go underground prepared ourselves in sweltering heat while Mark and Leo (who were on dog-sitting duty) gloated at their relative unclothedness.

We found the entrance with ease, but Excalibur Pot requires unlocking with an escape-room level of complexity we hadn’t been warned of by the trip organiser (Nat, of course), requiring us to find the entrance to a different cave to locate a code-locked safe box in order to retrieve a key to unlock our own cave entrance.

Climbing down the scaffolded chaos of the entrance (plenty of spiders to marvel at) Helen found the entrance pitch with a pre-rigged rusty ladder. Ignoring the ladder we rigged a normal pitch and abseiled down to a ledge leading to the final “Main Chamber”. Several ways on presented themselves, and we picked the wrong ones.

I ferreted off along the route with the most obvious signs of wear, unfortunately this lead to a LOT of wallowing in a low, wet crawl (which I have since discovered is called “Shit Creek”, and is the connection to Jenga Pot), there are some pretties up this way; a few nice flowstones, gour pools and a grotto called “Merlin’s Laboratory”, of which I can provide a testimonial from Jethro:

Finally relenting, we decided to return to the main chamber covered in mud, despite being told that the main attraction of this cave was the fantastic streamway. We tried the remaining way on, with Tom leading. After a brief bouldery breakdown we found a cross rift leading down to a lower bedding plane, I followed it briefly before realising it was returning back from whence we came. At this point morale was dwindling; we had spent 45 minutes underground on a trip that was supposed to be an hour-long jaunt before an afternoon at the beach. Jethro, as ever, carried the most energy and scampered on ahead through wet squeezes, desperate to find the way on. Tom and I lingered behind, resigning ourselves to only follow Jethro if he was certain he had found a way on. Helen was behind, waiting for Nat who was dawdling somewhat.

Very soon, Jethro returned with news of a good way on, Tom scurried through the wallows to catch him. I followed, calling to Helen so she knew to join us, we crawled a short way and found a sizeable junction, at which point we split up down the 4 or 5 possible routes, my option ended in a dig fairly quickly, as did Tom’s. We all returned to the junction with Jethro, yet again, being the bearer of good news; he could hear a waterfall further along his chosen route! Tom and Helen sped down the crabwalk to follow him, I called to see if Nat was close behind; she was not. I told the others I’d catch up with them and returned along the belly-crawls to the boulder breakdown, calling out for Nat.

It turns out that, upon losing sight and sound of Helen, Nat had defaulted to her usual defence mechanism of throwing herself head first down the nearest rift and getting herself stuck for 20 minutes. I found her post-self-extrication in a state of dismay, insisting on climbing out immediately. I obliged and we ascended the rusty ladder pitch, struggled past the squeezes in the scaffed-up entrance, and chambered out into the light amidst the cave spiders to be welcomed by the dog-sitters and, most importantly, the dog.

The others weren’t far behind, with stories to tell of glorious streamway passages! We wandered back to the cars, and got changed. Interrupted only briefly by the landowner who was excited to see people who’d travelled from as far as Sheffield to visit the cave.

A cracking little trip, even if you don’t manage to reach the streamway – I recommend a visit if you’re in the area. Permits are easy, and there is very little rigging.