Date: 06/07/18 Members Present: Myself (David Botcherby), my family, a very familiar tour guide, some other punters As my results were coming out that day, we preemptively decided to celebrate by spending the day exploring the princes’ paradise that is Monaco (it being around 40 mins from where we were staying). The hope was that […]

Members Present: Myself (David Botcherby), my family, a very familiar tour guide, some other punters

As my results were coming out that day, we preemptively decided to celebrate by spending the day exploring the princes’ paradise that is Monaco (it being around 40 mins from where we were staying). The hope was that I’d be able to receive my results while having a drink in a sunny bar. To ensure this, instead of taking the normal route, we instead took the much longer, windier mountain road. This cut our time down from 40 minutes to a mere 2 hours, with only two long stops due to carsickness and 3 close calls with the cliff edge, though the views were incredible. As a result, I received my results in an uncomfortably warm 7 seater, surrounded by 5 other people who felt like throwing up.

At length, I was awarded with my celebratory drink which, due to the locale, was an overpriced Leffe, although I did have a good view of the harbour from where I sat. As I placed a call to Kyrgyzstan to inform my friend who was on his own (much better sponsored) expedition of his results, I surveyed the superyachts and wondered if our good friend and benefactor Mark Wright had anything to do with these improbable floating palaces. My thoughts on Monaco in general are: lots of mirrors, people in sunglasses turning up their noses at you, and taxi drivers thinking they’ve entered the Grand Prix.

We went on for a walk around the Monaco Jardin Exotique, which is nicely situated on top to the hill, affording views across the country, and containing many tree sized cacti and other succulents, but most importantly, turned out to have a cave underneath. Eager to have a look around, and keen to escape the oppressive heat and humidity of the Mediterranean afternoon, I convinced my family to join me for the tour. The tours were on the hour, so it was only a short wait before our guide sauntered into view. This quickly caused hilarity among us, as the tour guide was the spitting image of my younger brother. Despite his protestations, this young man had exactly both his appearance and mannerisms. Our tour was given both in English and, due to a lonely local, French.

The cave was named the Observatory Cave, for reasons unclear, but presumably something to do with instruments measuring heavenly bodies. Our guide informed us that the local cave temperature was around 25 degrees, with a high humidity, which I found quite upsetting. He then warned us not to slip on the 300 steps to the bottom, upon which I looked down, and thanked my lucky stars that I was wearing my DCA branded technical flip-flops. 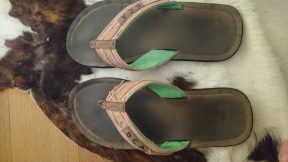 Properly attired in t-shirt and shorts, I began my descent into the cave. Apparently there had been some discoveries of prehistoric human bones when the cave was first discovered during the garden’s construction. Oddly, very little was said about this, although some suspicious looking bones were scattered next to an information board. I think there was a museum nearby to find out more. Our guide pointed out the ‘cavers entrance’ which piqued my interest as it implied there was more beyond the tourist route. When I asked, he told me there was about twice the cave beyond the tourist route, which for a cave that took half an hour to be guided round wasn’t hugely impressive.

The cave started at around 100m altitude, and descended almost the sea level. About halfway down there is a blasted section, and the character of the cave changes to well decorated fossil passage, with nice European tiered columns and many ‘mites and ‘tites. The path leads along walkways over large-ish pits, and descends to th end of the tourist trail, from which can be seen a way leading on and down. The main attraction, however, was the cathedral, a big and pretty chamber, with a stalagmite resembling the Virgin Mary with babe in arms. To its credit, I saw the resemblance before our guide pointed it out, which is more than can be said for most formations of its type.

The way out was slow going due to having to walk a large group of tourists up 300 stairs in the hot and wet. I attempted to engage our guide in conversation about local caving, but he didn’t know very much about it (although I could have been talking to my brother, it was unclear). Exiting the cave had none of the usual pleasure, being about the same conditions as inside. I was then content to head home via the (much faster) normal route. I visit this area (my grandparents live in Cagnes-sur-Mer, near Nice) a lot, so I’m keen to find out more about any caving near there. Maybe next year’s holiday we can camp in their garden.