Some of you may have heard about the first attempt at this old mine in the Heights of Abraham, we tried it originally three weeks ago but ended up searching the wrong quarry. Not only was it the wrong one, but it was also more than twice the size so took us two and a […]

Some of you may have heard about the first attempt at this old mine in the Heights of Abraham, we tried it originally three weeks ago but ended up searching the wrong quarry. Not only was it the wrong one, but it was also more than twice the size so took us two and a half hours to search before giving up. There was one vaguely promising hole I found, but once Corin came to help it became clear it was literally just a hole that fit about half his body into. The trip was essentially a long hike interspersed with brambles scratching my face off, and a few small urbex trips into some fairly small bunkers, but it was a still a nice walk – #getfit4exped.

The second attempt was not without its problems, but we did eventually get underground. After searching for an hour in the opposite direction to last time we regrouped and realised James was completely missing. Retreating to the car to cancel callout and put warmer clothes on took us to half past eight – three and a half hours after leaving the kit store. We split up and started looking. Corin and I finally found the quarry, and there was even a headlamp on the other side! And another… and another… I ended up shouting at the light anyway, but it was a different group and James was still missing. Anyway we did eventually find him so we could regroup and head back to the quarry. Finding the cave took another half an hour so we entered the mine at 10pm for a 2am callout.

Corin did a quick recon before we all went down and it sounded promising – no water, climbing, and only a little bit of squeezing. The side of the quarry was riddled with potential entrances so James, Emmett and I followed Corin and Gamble dropped down to the lower entrance. We jumped across a small gap, ignoring a slightly suspect looking rail that was very obviously bent and ‘secured’ in some sand. The first climb down was a chimney-like three or four metre drop with smooth sides, so I ended up bracing myself against the wall and shimmying down – this strategy turned out to be pretty useful in the mine. 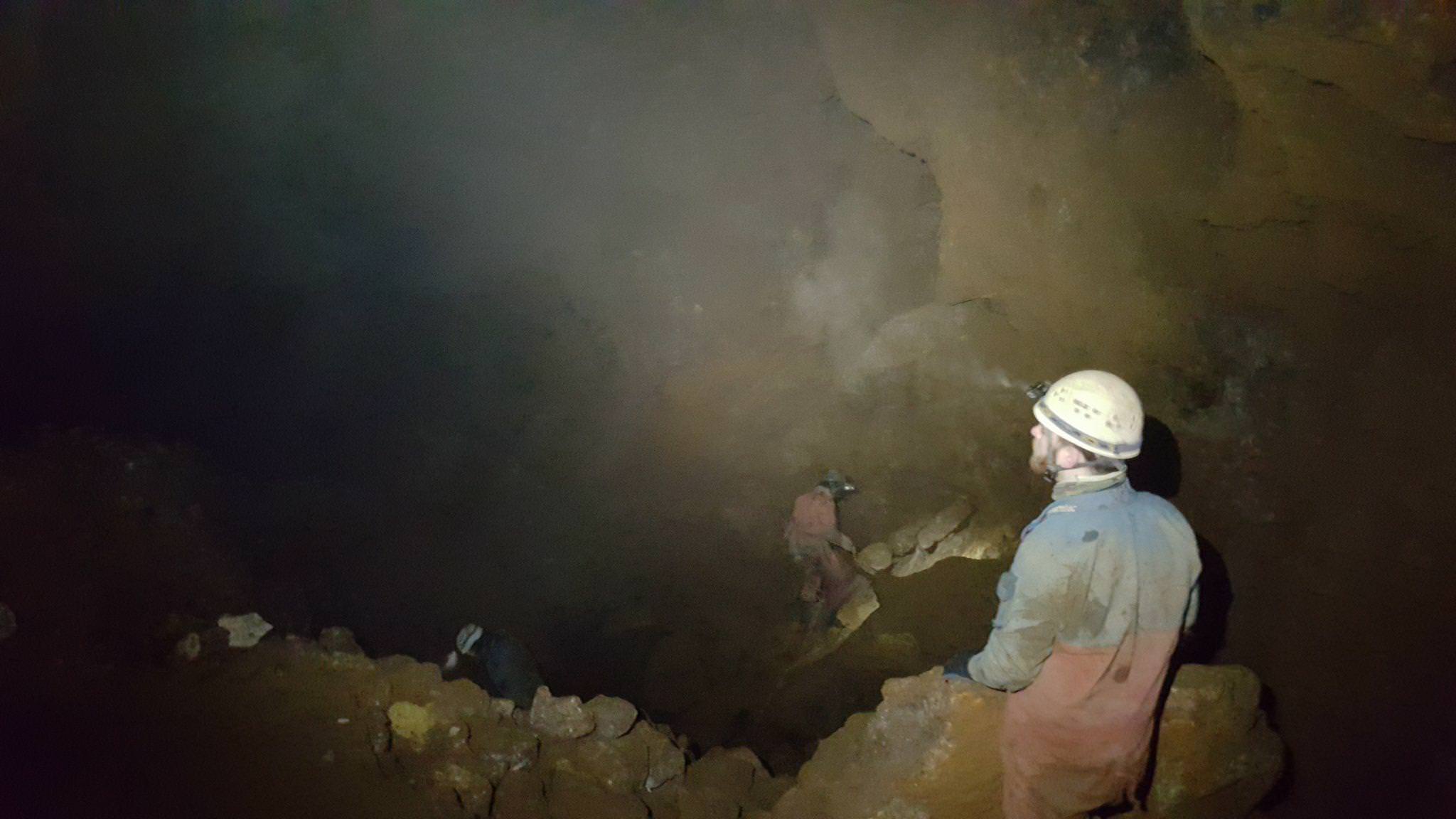 Initial cavern with tunnels coming off it

I got to the bottom and came across Gamble, where there was already a choice between a high or a low crawl. I chose lower and scrambled through into a tunnel that led right into a large chamber. The rest of the contingent caught up and continued as James and I were distracted by excitement in the floor and ceiling – his eye was caught by the chance for some prospecting, and mine by a very climbable looking hole in the ceiling. After the initial jump onto a good foothold, I repeated the earlier intricate and safe technique of ‘get stuck and slowly shimmy upwards’. It was a bit worse going up because the mud was slippery and I had to avoid another old rail. The small chamber turned a corner and dropped into another, larger cavern which I wanted to investigate but probably couldn’t have got back up from. Alas, I turned back and slid down the hole, using the rail as a backup for lowering myself down. I found James prospecting and helped him find some white quartz up towards another tunnel. Corin later explored the tunnel and we worked out that it could connect with my previous drop from the climb, but as we both backed off dodgy looking climbs we won’t know for sure unless we go back.

The large chamber had a clear tunnel to follow on with the stereotypical struts holding up the rock for a few metres. It led into a very low-ceilinged room with old drystone walls everywhere, and tiny mining holes scattered about the walls. There were decades-(possibly centuries?)-old pickaxe marks in the most unlikely places. I was wondering how someone could swing anything in the tiny spaces until someone suggested the realistic but depressing idea of children working in there. I had forgotten this mine was Victorian. Sobering thought, but we continued. This large, low chamber had a few paths leading away, so I chose one and caught up with Gamble and Emmett.

We came across a bat in its roost, the first proper wildlife I’ve seen in a cave (apart from a frog in P8 but that was hardly a cave native). Unfortunately, we woke it up pretty fast and didn’t know how to put it back to sleep so we left it to flit around looking angry. At this point I was finally experiencing the weirdness of overheating in a cave, so we had to take a break and cool down before continuing. 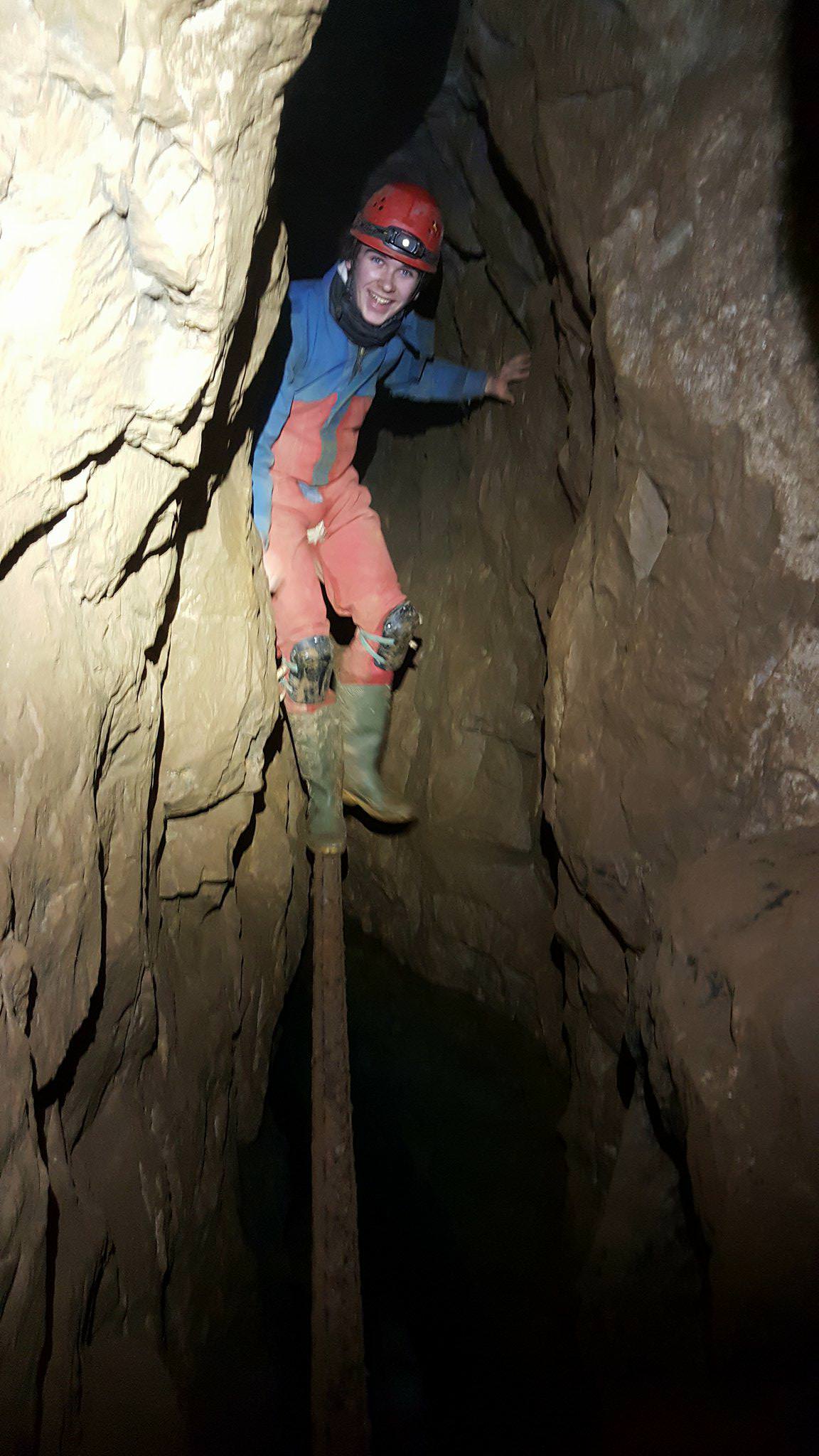 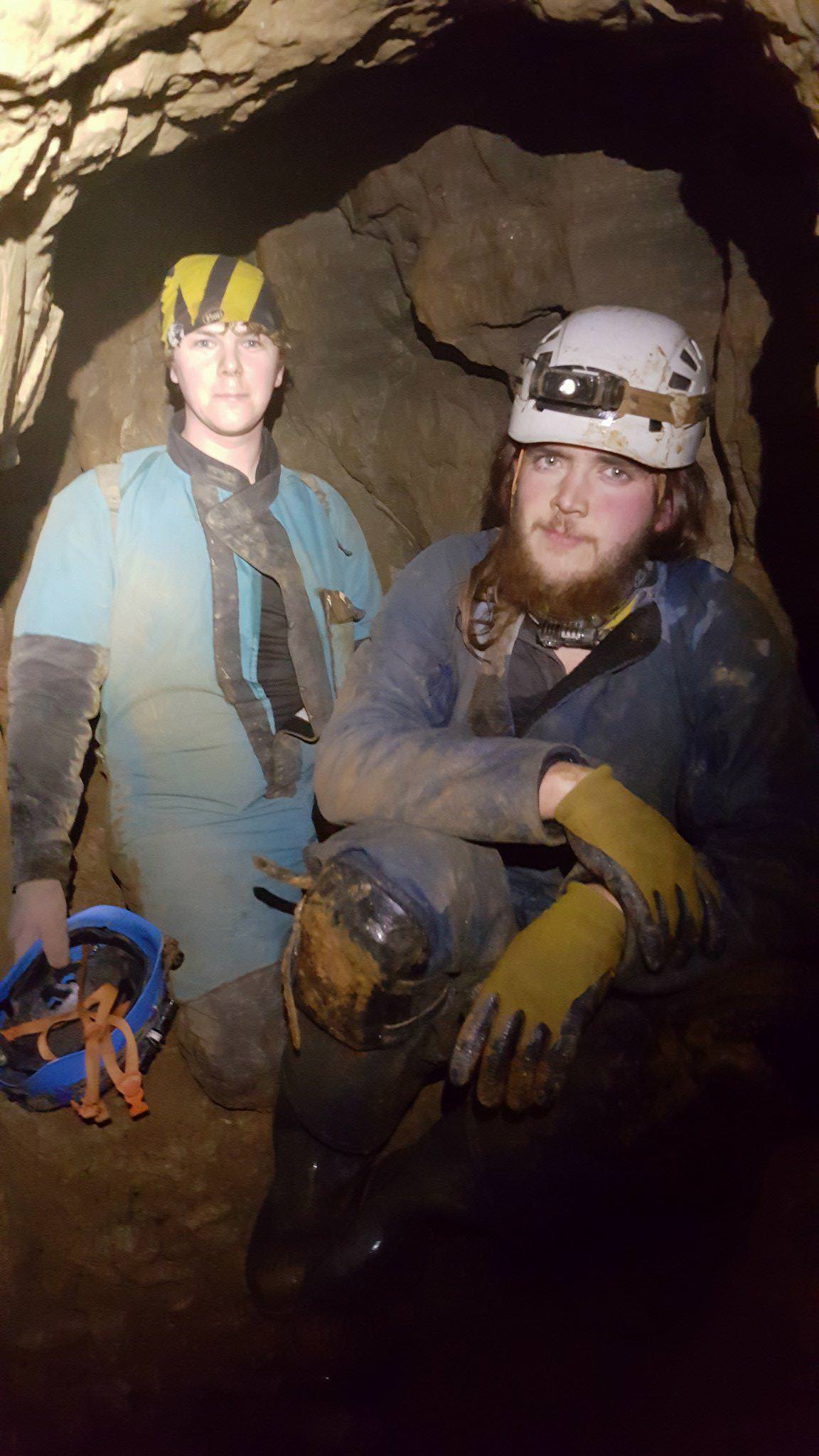 Further down the tunnel it suddenly became very wet and in violation of even Victorian health and safety regulations: the floor disappeared into water. The tunnel wasn’t short and about a metre wide, but there were four consecutive sections where there were pits of water, a couple of which looked bottomless. The OG pit had a large wooden plank across it, which was a lot more stable than it looked – not too bad. Next was similar but it was another one of those old bent rails instead. Slightly more nerve-wracking, but once again it was more secure than I thought. Pool the Third: total bastard; there was another plank but it had snapped in two and was dangling uselessly in the pool just taunting us. I gave up here because I’m not yet confident enough in my shimmying ability but Corin is! He carried on to Pit IV; as far as I could see it did have a plank, but it was horizontal and probably useless. So major plaudits to him, but I decided to turn around and climb around the top of the tunnel and take some risky photos on James’ phone.

The second lead from the previous chamber took us into a room full of old mining equipment that looked ripe with tetanus. There were a lot more rails too, you could clearly see the tracks where the old minecarts would have gone through. It led on to a much larger cavern with hundreds of pick marks reaching all the way to the arched ceiling thirty metres above. There was a rocky bridge crossing the room about halfway up so it was very reminiscent of the Mines of Moria (minus the goblins). It ended in a large pool full of old equipment, seen below. 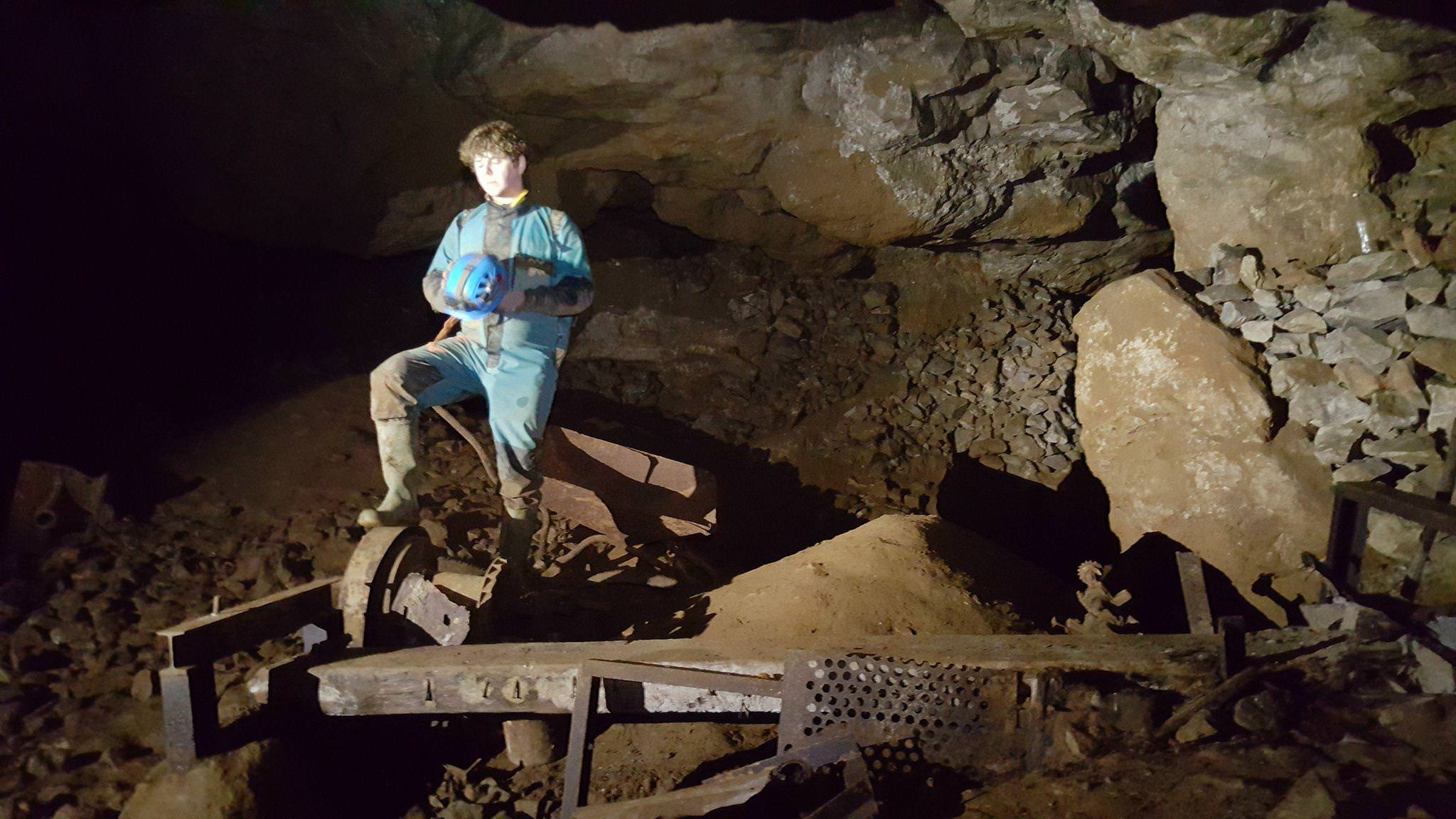 It was almost time to leave at that point, so I investigated one more tunnel which soon turned into a lot more natural looking cave, with a lot of drips to go with it. It turned out the shaft led right to the surface and an iron grate that James had found during his magical mystery tour of a few hours prior. We know the system continued for a while after that, supposedly for 5km, but we called it quits and left. 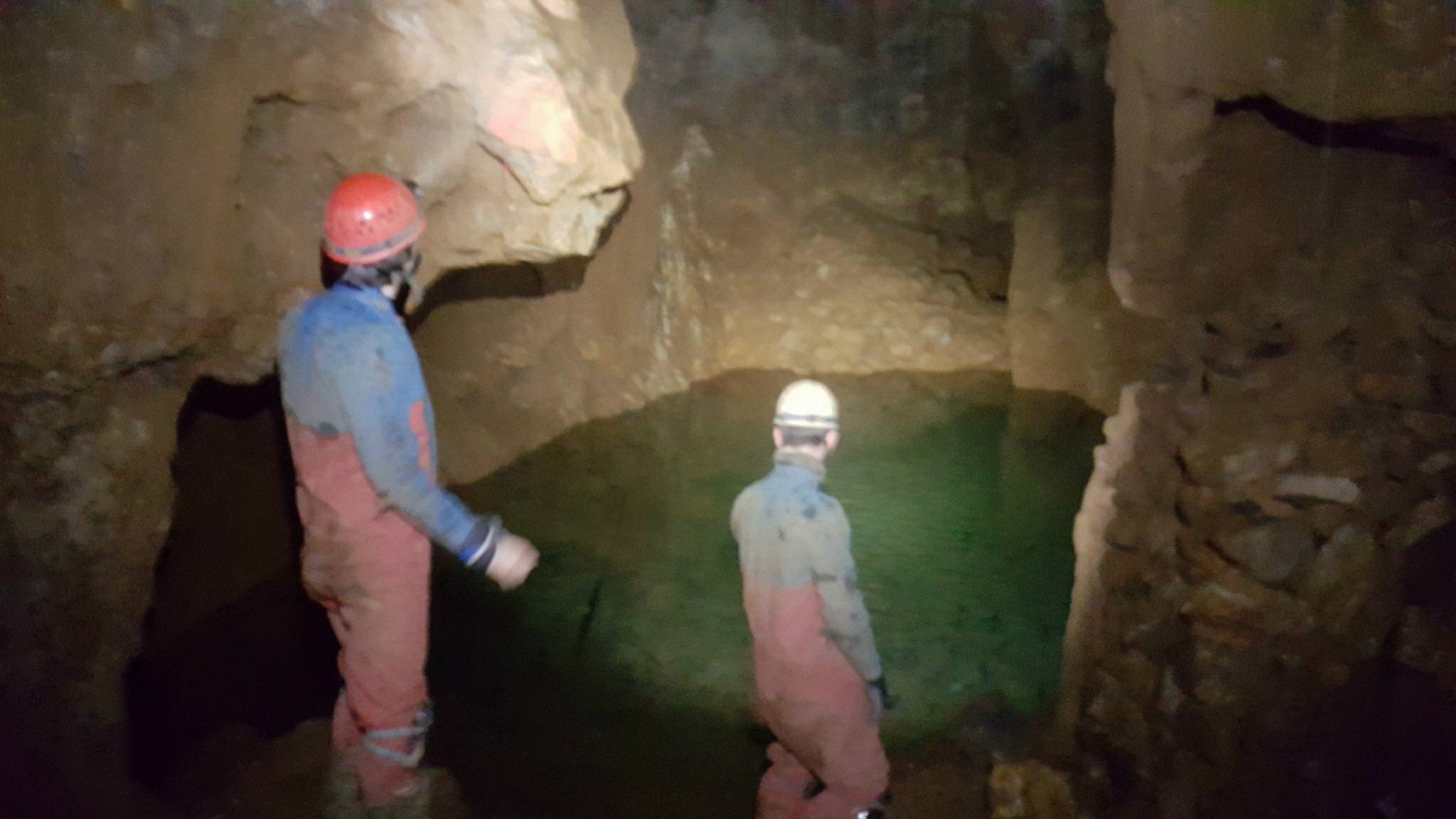 End of the line

The way out was a slightly different crawl then climb, but just as fun. I’d like to go back at some point and try to connect those passages I climbed up to and investigate the rest of the mine, I feel like I barely scratched the surface. It was definitely a fun trip once we finally got in, I would highly recommend it for those wanting a change from soaking wet caves.