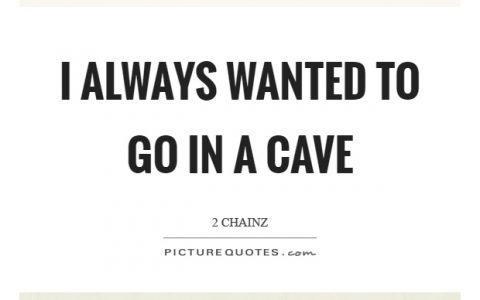 I’ve been caving for half a year, and from the eyes of a fresher caver, so many things have hit me as new and alien experiences. As it’s recently been my last trip for this year with SUSS, I wanted to write up something a little different. These are the thoughts that I’ve had since […]

I’ve been caving for half a year, and from the eyes of a fresher caver, so many things have hit me as new and alien experiences. As it’s recently been my last trip for this year with SUSS, I wanted to write up something a little different. These are the thoughts that I’ve had since I started caving, and the advice I’d give myself and other cavers starting out. 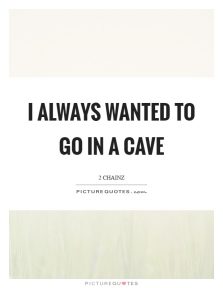 “The cave could cave-in right now though”

The cave that has been stood there for thousands of years is not safe, and the houses outside that don’t last as long are safer? These caves are sturdy structures built by nature, and have stood much longer than the buildings your living in.  It’s an understandable fear to think it will cave in, but its so damn rare its just best not to think of it. You’re waaaay more likely to die of hypothermia in a cave, so worry about that instead!*

“I’ve never seen so much mud in my life!”

Legit. If you think you’ve seen mud. Think again. Discovering how thick and strong mud can be is also interesting, perhaps as much as the soft wet mud that you can sink into. Perhaps the best thing about it is where natural ‘slides’ form, allowing fast access into the depths of a cave. 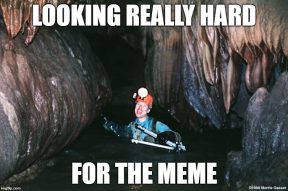 “Why the hell is there a random spade ?”

It’s not just spades hanging around down in caves and mines, but other man-made objects that make you second guess how they got there. Spades are usually left for digging out a cave from mud, but newspapers, bottles, cans and other man made objects can appear quite startling amongst the natural rocks. It looks extremely unnatural, but don’t touch them! They could be considered artefacts if left long enough.

“This water is F***ing freezing”

At some point in your caving experience, you’ll have to immerse yourself into water. A lot of it. It’s going to entrench your suit and go to places you won’t want it to. And it’s bloody cold too. It will be an experience you don’t want to do, but once you’re in, it will certainly wake you up. 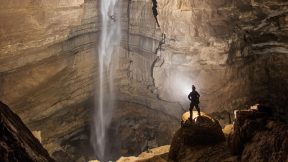 “I won’t fit through”

When you don’t know your own capability yet, every small gap seems like it will not be big enough for you to fit through. Sometimes, this is very true. However, most of the time, it’s just the mind being cautious. In many cases, you can fit through, even if it takes some talking from another SUSS member, or maybe just putting one arm out first, and then the other.

“I wouldn’t have done that without them.”

Caving is based on team work, hence why we never go alone in a cave. There have been times where I’ve panicked, or felt stuck, but was able to work my way through because of another SUSS member being there, and talking me through it. As a caver you quickly learn that these people are people you can 100% trust without any hesitation, and you become an instant team with whoever your with. When you’re underground, and there’s a problem, you’re places in ‘fight or flight’ mode, and you become more reliant, and feel more connected to the team around you.

Sometimes, when doing something extremely challenging, it can feel like all you can do is panic. Perhaps it is to get through a small hole, water diving, or even both! The mind will instinctively tell you to stop what your doing, but you have to press on, for your team mates and – for yourself. To push yourself to new heights you have to do brave things and challenge yourself, and part of that in caving, for me, was to push out my mind telling me to stop, and just get on with it. If the cave has been explored for many, many years previously, and my SUSS members in front of me have just done it, then it’s ok and will be safe. 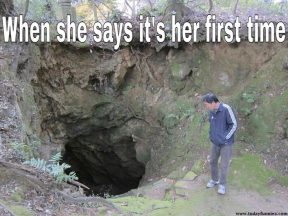 “I don’t trust myself”

Still a big reason I won’t do any rope work in caves. I simply don’t trust myself as a caver yet. To build trust in oneself within a cave is a process that takes time. I see the more experienced cavers and think how incredible it is as to how fast they can zip through a cave, and yet I’m still not sure if I can trust myself because I could slip up on the mud. I guess, this one I haven’t figured out yet.

“Everything is terrifying and unexpected”

Just when you think you know a cave, just when you think you couldn’t get another experience that pushed you mentally, up comes another cave that pushes you further. You never expect what direction you’ll be going in, will it be down ? Up? across? Will I climb? Will I crawl? Who knows?! It’s best to expect the unexpected.  Of course, the best unexpected things are how pretty a cave can be, or how clear the water can be down below.

But a word of advice: if you hear voices in a cave, it’s ok. Don’t panic. These are ‘Cave Voices’ made by the sound of flowing water, echoes, and your mind wanting some sort of stimulation. It’s very freaky if you’ve ever heard it, but don’t worry. 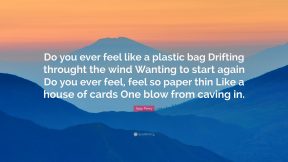 Yep.  You only remember you don’t like caving until you first go into the cave, and you’re apprehensive about what might happen, or how you will be pushed. However, once the experience is over, you realise that you miss being inside the world of caving. You begin to realise that you’ve become better at working together with others, better at figuring things out, and, better at not being so bloody scared of real-life things. You regain a sense of what a beautiful quality of life you have over ground and how lucky you are to be wrapped between your sheets, or drinking a cold one with the boys.

*Whilst this seems like a joke, if you get cold in a cave TELL SOMEONE and move around loads, ok? Do press ups or squats or something.