Over the bank holiday weekend six of us headed off to Wales. There was Team Jazz – Jack, Helen and Mark and Team Useless – James, Corin and I. Corin and I arrived on the Friday night after James, Jack and Helen had been up Tryfan during the day. Corin and I found Bangor with […]

Over the bank holiday weekend six of us headed off to Wales. There was Team Jazz – Jack, Helen and Mark and Team Useless – James, Corin and I.

Corin and I arrived on the Friday night after James, Jack and Helen had been up Tryfan during the day. Corin and I found Bangor with little issue however finding anything apart from the ASDA which we found repeatedly from our loops round and round and round the town center meant that the general state of the weekend had been set. As the two of us turned up the four of them took this as a good cue to leave a pub that was so dire and empty that it wasn’t even funny. We all headed back to the campsite (Corin and I now blessed with James’s prescence).

The original plan to follow the others was thwarted when I stopped to get petrol and the others just drove off into the distance. Directions to the campsite were left to James as he had been there before however James was very confused by literally everything and remembered almost nothing until we were nearly at the campsite and then declared that something looked familiar. James pulled up google maps and seemed perpetually confused by everything (I took the wrong turning at one point which didn’t help).

The next day we all took down our tents and headed for Croesor Rhosydd. Corin began map reading and we headed into the nearest town for caffeine and matches. We then headed towards CR and seemed to take a very very long way around and never seemed to quite find the A470. Eventually we found it (from the wrong direction) we began to head towards our actual location. We then found a very direct but less well travelled route and so Map Reader Extraordinaire James was now on the case and was only marginally less crap than Corin who was promoted to gate duty up a very steep tight winding farmers lane that wound through a logger yard. This was all great fun as James was full of confidence building quotes like:

“I’m hoping that this road links to that one and we’re on the other one and yeah… oh wait my maps crashed again! We missed the turning…”

Do think you maybe know where you are Nat? Because er…..

But eventually we reached Croesor and after being shepherded on a grass banking in front of a school we began to get changed. Now, I know that I hide this well, but I’m not always a massive fan of caving. I made this known by being very vocal in my displeasure and refusing to touch my kit for the first fifteen minutes. I didn’t especially want to put my underclothes on that were still literally dripping from Giants earlier in the week. 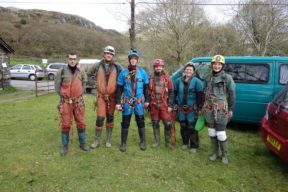 This was after we stopped flashing the primary school opposite

Croesor Rhosydd was stunning. It was like an adventure playground.You go in through a small hatch down and walk down a corridor and it opens out into something that wouldn’t look out of place in Moria with lots of split levels. We found a house/shelter thing that had been carved from the rock and had impressive burn marks and residue up to the roof/all along the walls and a stone bath in the middle.

There were abseils, rope bridges, massive deep craters that had beautiful pools in them, two tyroleans, two ‘bridges of death’ and lots of old mine workings to explore and ponder over. There was a really really cool bit where you got to abseil directly into a canoe and then pull yourself along the water using the polyprop to get to the other side so that you could prussick directly up a rope on the other side – this is less graceful than you might imagine.

We managed to find an engine turntable which the trains used to change levels in the mine which was really awesome. It looked like they could move the turntable between the different levels which was a really clever idea. Everywhere you looked there was something else that was immensely interesting. There was a ladder that was about 20 meters high that had rusted and the wire strands came away like dust in your hand. There was a split second when we went ‘it can’t be that way’ and we all blanched. There were very unstable slate sheets on the exit out which made ascending very fun and interesting.

There were old mine cart tracks disjointed and fractured strewn all over the passageways. In the ceilings in places there were huge suspended railway sleepers from the old railway lines which looked really precarious – especially the one above the lake with the boats on. The water was so beautiful and blue. 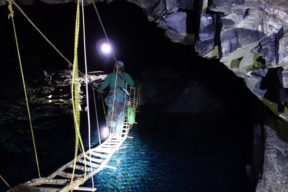 Nat on the First “Bridge of Death” 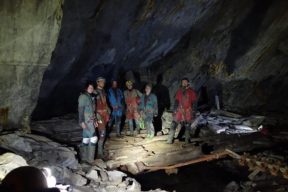 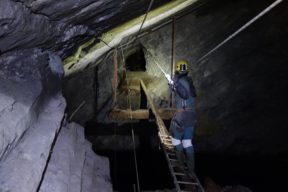 Helen on the Bridge of Death: The Revenge 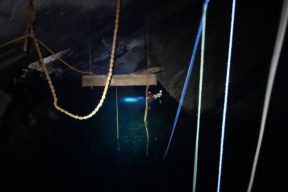 The view from the end of the boats 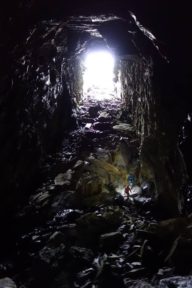 And I’m on my knees looking for the exit….

The exit from the surface

There was much merriment that night and the morning after we were sluggish to rise. Helen, Corin and I wandered around in the morning and ran into Daf and his Mum who brilliantly described Jack and James as:

“Where’s Fuzzy Wuzzy and the quiet one?”

We were very politely invited into the house to cook due to the rubbish weather so we began to cook our meager rations. Helen had spaghetti with sausages, Corin had macaroni cheese out a can (did not taste nice) and I had small pork pies and teenage mutant ninja turtle spaghetti which Rostam dubbed ‘a poor yorkshire mans breakfast’. Although according to Helen I had:

We began to frantically accept any and all offers of tea. I went back to the tents one last time to try and get Jack and James up and after they stirred a little we abandoned them leaving Jack very confused.

“Nat why the hell am I wearing your clothes?”

We were invited to help/watch everyone feed the sheep and the weather was just the right thing for a hangover although the bouncy Landrover was not! After we returned we collected the others who decided to go for a walk up to see the Gorge we’d intended to do originally. Jack and I wimped on this and volunteered to drive to the other end and meet them in the pub they wouldn’t have to walk back in the dark. We eventually returned home and had a far more subdued evening. Everyone refused to go climbing with Helen on the Monday morning and we all headed home to Sheffield. 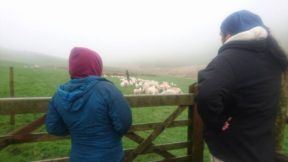