Members present: Myself, Rachael Rix, Liam Overett, Tom Butler, James Deakin, Adelaide de Diesbach, Michael Holliday, Antonia Headlam-Morley (A big group!) I awoke with a bit of a heavy head from the night before, and dragged myself down for some breakfast to elevate my mood. Trips were being organised, and I think I ended up […]

I awoke with a bit of a heavy head from the night before, and dragged myself down for some breakfast to elevate my mood. Trips were being organised, and I think I ended up putting myself on 3 different trips before finally picking a trip to go on – a visit to Sidcot Swallet and Goatchurch Cavern.

It took some time herding everyone up, convincing a very rough Michael to come caving and getting abused by dogs, but eventually we were on our way. It is a lovely drive as we drop down from the plateau and into the gorge that is Burrington Coombe, although not nearly as impressive as Cheddar Gorge that we visited on the Sunday.

We were dressed up in all our caving kit and on our way to the caves, and visible on the ground was the amount of rain that Storm Angus had bestowed in the area. The valley is pretty much dry with no surface streams as far as I was aware, but there was a great deal of fluvial sediment at the sides of the road and the grass had been flattened as if by flowing water.

I will be honest, I wasn’t all that impressed with the caves, mainly due to their lack in size, but it was a bit sporting and there were ducks (the plastic sort), so that satisfied me enough.

Sidcot Swallet was almost comparable to Winnats Head Cave in Derbyshire in the sense that there is a lot of shimmying yourself through little pockets between boulders/the walls. You eventually get into a chamber where the way on is down, but I found a nice seat in the calcite-covered boulders where I sat comfortably whilst the others caught up and had a look around the chamber (not that there is much to see).

You will see that the way on is at the bottom of the chamber where there is a hole in the floor that has a polished boulder you slide down and end up in the second chamber. Again, the way on is down ‘lobster pot’, which is an awkward hole in the floor. If you are like Southampton, you may want to rig it with ladders, but it isn’t necessary. To the left of the pot, there is a crawling passage that ends in a squeeze, leading to a 10m~ free climb, which can be done with ease, just as long as you brace yourself against the wall.

Back to lobster pot though, it is probably the most awkward bit of the cave as it is made up of calcite, so it may be a bit slippery, especially if you have a wet caving suit. After this, there are a couple of free-climbs down, which you have to do with care, but you eventually end up with the ducks.

Getting out was quick and easy, just a bit of a struggle at lobster pot as it involved pulling yourself up with no footholds. This is also the point where there was the serious casualty that everyone heard about when Liam’s lip went on a date with Adelaide’s foot. I also nearly grabbed a Pipistrelle thinking it was a rock I could grab onto. Surprised it managed to stay there with the legions of cavers that were visiting the cave that day.

We were out of the cave and on our way to Goatchurch Cavern and we still had 2 hours spare, so we were just having a potter about, exploring all of the random passages darting away from the main passage. You could tell upon entry (top entrance) that there had been some attempt in the past to transform the cave into a show cave (steps in the calcite and remains of railings). There was yet another Pipistrelle which was nicely tucked away in the corner of the entrance.

We went into a really strange section of cave which was a vadose canyon, but appeared to have fallen on its side, really surreal. I then pottered down to a bit where it was quite a thin tube that I had to wriggle through (very uncomfortable!) and popped out into a chamber. The others weren’t following so I thought it best to head back and meet them. I met them and we then made our way back out to the surface.

We got back to the car park an hour before getting picked up, so me and James went for a walk to the top of the gorge before then coming back and having cuddles with everyone.

Sidcot Swallet was 6/10, would not cave again.

Goatchurch Cavern 5/10 would not cave again. 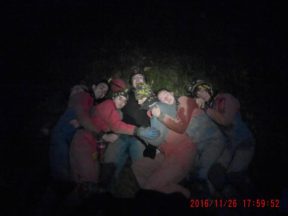 The result of having a 50 minute wait 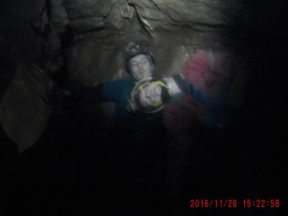 Waiting for Southampton to climb up Lobster pot