I’ve decided that I might actually quite like caving. On the Wednesday of our recent sailing holiday around Majorca we reached a sea cave that Helen had found through an old Dudley trip report that sounded amazing called Cova des Coloms. Due to numbers of wetsuits, lights and the logistics we decided to split into two […]

I’ve decided that I might actually quite like caving. On the Wednesday of our recent sailing holiday around Majorca we reached a sea cave that Helen had found through an old Dudley trip report that sounded amazing called Cova des Coloms. 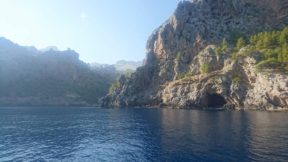 Helen’s Photo of the Coastline

Due to numbers of wetsuits, lights and the logistics we decided to split into two separate teams. The first team Rachael, Dave, Jethro and Tom disappeared off on the Leaky SUSS Bucket VI towards the headland that housed the cave. Two hours and lots of sunbathing later (you don’t get that in Yorkshire very often – Eurospeleo was the definite exception) they appeared back with rave reviews of the beauty of the cave and a small warning about the duck after Tom had to grab Rachael after a wave made her clatter her head on the ceiling.

After they returned we had lunch and Jack, Helen, Mark and I got our shit together, piled into the boat and gleefully set off. We lifted the small boat onto some rocks in a more sheltered cove near the cave entrance and swam around the corner looking for the duck. The entrance was awesome. The waves came in and the entrance acted as a funnel so the sound the waves made against the wall was impressively loud. The duck was at the end of the funnelly bit against the rock The duck filled up the ceiling and receded to give a gap of around 5cm with every wave so it was important to time the exit right.  We all popped through the duck and emerged into a large voluminous sandy chamber which was very South Wales-esque. The passage walls were covered in the most beautiful stalagmites and stalactites. The straws were so delicate and numerous, everything seemed slightly prettier than the last thing that you’d seen. We were trying so hard to be careful not to touch anything but there were so many pretties everywhere that you had to clamber over some of the pretty stuff to get over to the pools. The pools were stunning. Crystal clear and very blue (even with pixas). And the straws were magnificent. If you’d seen it in a film you’d think they’d gone overboard on their visual effects and graphics and that nothing that stunning could ever possibly exist.

The stalactites had stalactites and straws growing on them. The pools were simply divine and you could lie on your back in the cold water and stare at the beautiful ceiling. We found the big rock that we could jump into the deep pool below which was awesome fun. We had a chat and then decided to head back out towards the duck after tucking Dave’s waterproof camera down my wetsuit for safekeeping.

We reassembled on the other side of the duck and swam back to the little boat so we could head back to the Brimisilin. In my eagerness to take off my wetsuit in the hidden cove with the boat I completely forgot that I had wedged the camera down my front and watched in horror as it fell out and began sinking quickly to the bottom. I tried diving down to catch it but lacked the power to get to the sea bottom. Helen, Mark and Jack began diving down for it but no-one could get down deep enough but eventually Jack amazingly got the camera back and we were good to go.

We piled into the boat with little dignity and after a little faff got the reluctant engine to wok and set off back towards the main boat. This is where SUSS’s usual luck with boats came into play. The boat seemed to be quickly filling with water which was hilariously funny until the outboard motor let out a couple of grumbles and died and then failed to restart despite Helen’s best attempts. We were less than 15m from the main boat at this point but winds were simultaneously pushing us further away whilst the boat was swinging away in a circle around its anchor. Jack and I jumped overboard to pull the rope whilst we swum (Jack put his rope between his teeth), Mark paddled with the solitary oar/bailed the water and Helen fiddled in vain with the engine. It was a sight I’m sure. Tom, Jethro, Rachael and Dave were laughing at us from the big boat as they’d been doubting our ability to successfully pilot the small boat when we set off – although in our defense it was due to lack of fuel not personal incompetence. Jethro and Tom were dispatched into the small boat to bail it out with a bucket before we could put it away.