They say that he who faffs last faffs longest. This is demonstrably not true, as evidenced by the all-hassle, all-faff trip that we undertook last Saturday. Due to an unfortunate run in with an angry Greek road, I have been left essentially one handed for the near future, and as such can’t really do SRT, […]

They say that he who faffs last faffs longest. This is demonstrably not true, as evidenced by the all-hassle, all-faff trip that we undertook last Saturday. Due to an unfortunate run in with an angry Greek road, I have been left essentially one handed for the near future, and as such can’t really do SRT, and shouldn’t really get my cast dirty or wet. Luckily I was not the only SRT-challenged fresher, as Ivy had only done one tower training, so between us we managed to arrange an SRT minimal trip led by Glen and Creg (despite his protests)

Dragging myself out of bed was my first challenge of the day. Due to the late entrance of Rob and Helen the night before with an interesting idea for a drinking game (dubiously dubbed ‘Fuck Leo’ or ‘Get Leo Fucked’), I couldn’t exactly remember getting into said bed, although I am told it involved a prolonged search for an elusive light switch. After forcing down some breakfast, it was decided, after relatively minimal deliberation, that we would head to the valley entrance of the Kingsdale master system and wander about the streamway, as there was only one small pitch and minimal crawling. However, when we went to grab our kit and leave it became clear that due to no-one wanting to collect their own kit from Leo’s, all the club kit had ended up in random bags, most of which had already had the good kit taken out by the others, who had promptly fucked off. Myself and Ivy therefore grabbed whatever was going and got in the car for a nice drive along the scenic route to the cave entrance. When we reached the layby it was decided that I would start getting changed first, as it would take me longer. After gaffa taping a bin bag over my cast and deftly slipping into my caving clothes and oversuit (by myself!) the real faff began. The wetsocks went on rather easily, and although I couldn’t do it alone, the kneepads and SRT kit were surprisingly easy. I was only when I got to the wellies that I realised the great mistake I had madeletting others get my kit. The wellies were 2 sizes too small! I maintain that if I had full use of both hands I could’ve got them on, but even with Ivy’s attempts to ram them on my feet, it was clear that there was no way I was going to be able to wear them properly. So, after a quick search for my buff, which I’d somehow lost, I set off, wellies half on, binbag around arm, the biggest caving mess of the weekend 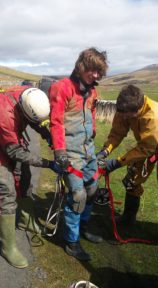 Look at the state of that

The Valley Entrance is pretty easy going, being a 20 second walk from the car, followed by a long series of stoops (or if you’re Glen/Creg, crawls) to the pitch. After Creg rigged the pitch it was decided that although I could abseil unassisted, it was rather irresponsible to let me do so, and so Creg went first and ‘bell pulled’ me by holding the rope at the bottom while I abseiled normally, so that if I needed to stop he could just yank on the rope. Myself and Creg then amused ourselves by chatting to an old member of the Bradford uni caving club, who’d taken his son for a very similar trip as he couldn’t do SRT, while Glen gave a lesson on abseiling to Ivy which verged on the long side. After that particular faff, we headed down the streamway to see what we could find, and after too long came to a section that seemed to go rather deep. As everyone had neglected to look at the survey before leaving, we had no idea if it went anywhere, and so Ivy, as the shortest, most keen, and many would say least disabled, was volunteered to check it out. She quickly found that it became more of a swim than anything, and despite her offers to carry me above her head like a gun the rest of us were much less up for getting wet, Creg especially, as he had forgotten his spare boxers. We then stood for a while in a natural bell, admiring the unidentified gold flecks in the roof and talking about Ivy’s dishonourable discharge, until Glen remarked that it was starting to smell like a bar due to our (mostly my) presence. We then decided to explore a few other passages to see if we could get anywhere. This mostly consisted of Glen going ahead to scope them out to make sure they weren’t too wet (they mostly were) while we waited about. After a short wander we realised that while we knew the way back we had no clue where we actually were, and decided that we’d try to find another way to the streamway, which we thought was probably somewhere below us. It was crawling somewhere around here that my wellies came off for the 50th time and I created the newest speedcaving technique: fuck wellies. My wetsocks gave me just as much protection as wellies half on and were just as comfortable. I only ran into trouble when I had to ascend a muddy slope, which in slippery wetsocks and with one hand was a bit of a challenge, Creg being my safety net for most of it. After that particular attempt we decided to cut our losses and turn around. When we reached the pitch it was decided that I would be rescued up by Creg. Creg went up first, and while we were expected a shout of ‘rope free!’ we instead heard a faint cry of ‘oh nooooo’ as he failed to keep his boxers dry going over the pitch head. Next was Ivy, who again needed a refresher on how to SRT, and so took a fair while, as my wetsocked feet got colder and colder from the streamway, losing their miraculous warmth. Glen then set out to prove that you could prusik one handed by holding my wellies in his right as he went up. Finally I was pulled up the pitch, mercifully quickly, and landed on the pitchhead like the catch of the day. A spot of quick derigging later we were off, past a gopro wielding family group and out the entrance, where the weather was absolutely glorious. So elated were we by the sun that we decided to block Creg in the cave and leave him there as we sauntered down the hill to meet the group coming out of King Pot. A quick bit of faff later (including Glen pulling gaffa tape off my arm and Dave pulling toenails off his foot) and we were off to the café for some well deserved (or not) chips and gravy