After and evening of heavy drinking (at least for some of the group), I was rudely awakened bright and early by none other than my own bladder, I wandered downstairs to find Glen cooking breakfast solo – so I gave him a hand. Over breakfast there was much deliberation about which cave we should go […]

After and evening of heavy drinking (at least for some of the group), I was rudely awakened bright and early by none other than my own bladder, I wandered downstairs to find Glen cooking breakfast solo – so I gave him a hand.

Over breakfast there was much deliberation about which cave we should go down. As the paradoxically warm winter morning sun beat down on us we chose to stay mostly above the ground, and thusit was decided that we should go to Porth-yr-ogof as it was small, easy and picturesque. We arrived at the official car park but after seeing the extortionate parking fees we drove 100m away to a big layby where the cars were haphazardly parked. Approaching the cave entrance we passed numerous signs and barriers attempting to persuade us not to enter. However, being cavers as we are, we simply assumed these warnings were for the tourist-caving proles and not the professional bylaw-exempt caving patricians that SUSS are. How very Byzantine.

We reached the cave entrance which was admittedly very impressive, just outside the entrance was a crystal clear pool that looked very inviting in the warm midday sunlight. Sam and Sam both agreed to each other that if the other jumped in then they would too, but no sooner than the appropriately named fresher ‘Streaker Sam’ was getting undressed a party of 13-year-old girls dressed all in matching caving kits arrived, led by a bloke who was attempting to shepherd them from the cliff edge while giving a half-hearted spiel about ‘cave safety’. We overheard one girl uttering one of the most objectionable sentences I’ve ever heard in reference to her Warmbac Oversuit; “I bet those guys down there are well jel [sic]* of our lush onesies”. Had Mark been there I doubt we’d have been able to hold him back.

*Footnote – this is not a ‘sic erat scriptum’, it is the sound of myself being physically sick as I type the words ‘well jel’ into a published document.

We decided it was against the interests of everyone present for us to enter the cave at the same time and place as the girls so we traced the path of the cave along the surface, passing a few pot entrances as we went. We walked along the top of what was clearly a roof collapse and took the opportunity to get some ‘underground time’ in the two entrances that had been exposed by the collapse. We took a quick peek inside but with no real kit on we soon returned to the balmy, sun-blessed surface.
After walking down some epitomical karstic landscape we reached the infamous Porth-yr-Ogof resurgence, which has claimed the lives over over 10 people, making it the deadliest single location in a UK cave – only a few metres from daylight. It is easy to see why, as the pool at the resurgence looks inviting and the stream that leads into the cave is just begging to be swum into, unfortunately due to strong undercurrents and undercuts beneath the surface even the most competent of swimmers will struggle to resurface.
A few metres downstream of the resurgence is a pool that appears to be much safer, so after a bit of encouragement the two Sams and Naomi strip down to their smalls and took a leap in. Streaker Sam seemed completely unphased by the bitingly cold February water (which was still frozen in some parts), Sam and Naomi on the other hand climbed out of the water as quickly as they had jumped in. After a bit of stone-throwing and scrambling around the water we all set off once again. We followed the river for a fair distance until we saw it drop off in the distance; we had finally reached the waterfalls.
The falls looked as though they might be impressive during heavy water flow – but during the current dry spell they seemed rather lackluster. Glen regaled us with a tale of a time gone by when he was young and he and some friends took turns going along the ledge that ran along the falls just below the drop-off point, competing to get as far as they could before the strength of the flow pushed them off the shelf and into the pool far below, in its current state such a game would have proven impossible; the water didn’t have nearly enough power to launch itself off the edge and simply poured down the cliff face.
After much oo-ing and ahh-ing at the falls we continued along the path to the next set of falls. The paths were surprisingly perilous with steep drops, slippery rocks and exposed roots it was almost designed to make you fall, we all made it to the bottom of the next falls and Will spied a photo-op. 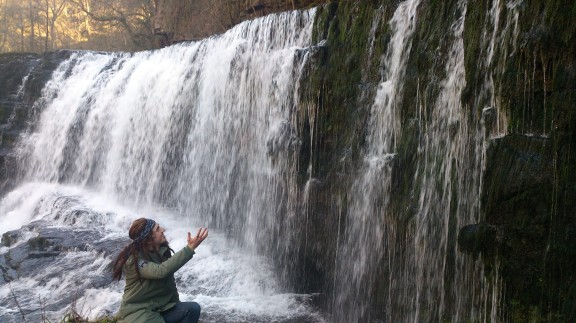 The perfect pose for a caving model

He chose to pose Streaker Sam atop a pile of rocks right by the base of the fall, looking up and gesturing at the torrent above him in apparent and obvious wonder. The photo is a potent satirisation of every caving photo ever because, as we all know, a caver hasn’t truly seen a marvelous feature until they have been photographed looking at it with an over-expressed gormless look on their face.

We went on a little bit further to see the next big pool, which was particularly wide and deep. Despite the presence of a couple and their dog out enjoying a lovely picnic on a rare warm winter day, the Sams and Naomi decided to take another opportunity to strip and take a jump in, the dog looked poised to join them but thought better of it when a load of bitterly cold water splashed it after Sam’s bomb into the pool. After the trio had had their fun and were changed we decided to turn back, this time walking via the adjacent road. 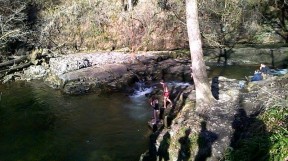 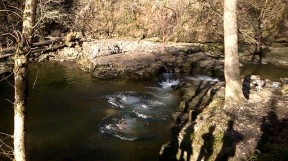 Of course they will.

The road dragged on for a few miles but it proved to be a good choice as we took a brief stop at a tiny little petrol station where we all got ice cream and sat by the road in the sun.

After the ice cream the monotonous three-mile walk along the road seemed less daunting and we were soon back at the cars and bidding farewell to Sam and Naomi.

We made plans to return to the quaint Croyden Cottage in the summer, when the poor insulation and lack of amenities would matter less and we could enjoy a barbeque in the spacious and pretty garden. 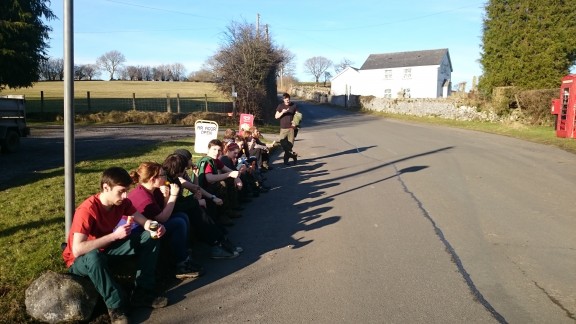 A great end to a great weekend