This weekend away has quickly found its way into my Top 3 Favourites. While it didn’t have a singular defining moment it was certainly knitted together from numerous memorable events. The weekend started – as many do – with Friday evening, and like so many Friday evenings before a weekend in south Wales it was […]

This weekend away has quickly found its way into my Top 3 Favourites. While it didn’t have a singular defining moment it was certainly knitted together from numerous memorable events.

The weekend started – as many do – with Friday evening, and like so many Friday evenings before a weekend in south Wales it was dominated by a lengthy drive, made interesting only by Rostam’s commentary on the England vs. Wales Six Nations game delivered by text. As an avid Welsh fan Rostam’s comments on the proceedings seemed to lack enthusiasm towards the end of the game, which ended in a 21-16 victory for England. After some superb navigation by Glen (no sarcasm here, if you ever need someone to take on the Mongol Rally take him, surely the navigation involved isn’t as hard as locating a small Welsh village in the mining valleys of Brecon) we finally arrived in Ystradfellte. Due to his overactive bladder we arrived before Will despite setting off an hour and a half after him. We saw that Sam and Scott’s cars were already parked and fearing how Sam was getting on in a small local Welsh pub shortly after a tense England vs Wales rugby match we hurried inside.

Just like a scene from a film, the moment we crossed the threshold a dozen Welsh faces turned to face us. Conversations ceased and stares even colder than the harsh winter night we had just escaped permeated our very souls, or something like that. We walked through the huddled groups dotted around the room to meet Scott, Sam and Sam’s ‘+1’, Naomi. Once joined by the remainder of our party we stayed until chucking out time, which was probably for the best as Sam had begun a drunken display of his ‘Welsh’ accent that could be heard throughout the pub.

Within minutes of being in the cottage, before we had even figured out how to turn on the water, Scott had located the sound system and was blaring his psy-trance until the early hours of the morning; a decision that split the group in two between the people who wanted an all night rave in a cold Welsh cottage equipped with only basic amenities, and those who wanted a peaceful night’s sleep on a caving weekend (yeah, right…)

A South Wales weekend would not be complete without a trip down the expansive and labyrinthine Ogof Ffynnon Ddu, clocking in at 59km and with a myriad of twisting, multi-leveled passages it’s not the best cave to go in if you’re no good at navigation. Thanks to our annual permit for OFD with the South Wales Caving Club, getting lost in there was pretty much what we had planned for Saturday. We split into two groups; Glen, Will, Sam Snowdon, Will Wood, Natalie and I went on a tour of OFD and the others planned a through trip.

We pulled up at the SWCC cottages and, following a brief chinwag with Tony Seddon (and of course a couple of last minute gear purchases from his shop), we collected the keys and headed off on a radiantly sunlit walk up to the top entrance of the cave, high up on the snow-covered valley side. We reached the top and as the keybearer, I headed into the hatch that formed the entrance. While working my way through the tight window into the cave I was assaulted with a barrage of snowballs thrown from above. I hurried inside and the rest of my party, my frosty assailants, followed suit.

From the entrance we went straight to the ‘Big Chamber Near The Entrance’; some of the names given to places in caves get a bit of stick for having obvious and disenchanting names, however I think that this chamber is possibly the most aptly boring of them all. Heading down and out of the chamber we tumbled, tripped, stumbled and slipped our way over the boulders into Gnome Hall, a conversely enchanting chamber when given the juxtaposition of having just arrived from the very basic Big Chamber Near The Entrance. We rested amongst the many gnome-shaped speleothems in the Hall of Gnomes while I answered the many questions that Sam, Leo and Will had.

After catching our breath we left our gnomic friends in peace as we headed deeper into the system. We soon arrived at the Corkscrew Climb and I had to do the usual thing at this point on a fresher OFD trip, stopping the freshers absent-mindedly continuing straight on and falling off the hidden 10m drop. I headed down first and spotted them off the twisting climb and down to the streamway. Our aim was to reach the cave’s main streamway but  we took a diversion to the Trident, a 5m+ stalactite that as the name suggests, splits into three parts at the bottom.

After seeing the Trident we carried on past it instead of returning to our original route, we had decided to go rogue and headed towards Swamp Creek, a fairly pleasant bit of stream passage. As we were climbing down into the stream we heard voices up ahead. When yelling yielded no response I sped up to meet our subterranean friends. When our paths finally met we exchanged pleasantries, they revealed that they were with Plymouth University Adventure and Expo Club. After sharing a few memories of the previous Southern CHECC event where we saw Plymouth last, and after they warned us that the Creek ended in a boulder choke that had a frog next to it, we said goodbye and hurried along in anticipation of meeting this troglodytic amphibian. Sure enough, just before we reached the boulder choke (which I passed only to find out it lead to a complete dead end) we encountered the aforementioned frog, which everyone agreed was actually a toad. We left our bewarted friend in the sad knowledge that he was soon to meet his maker and splashed our way back to the Trident.

Once back on our original path we were beyond the point of anyone’s memory, I certainly hadn’t been this far into OFD before, so we were relying on instinct alone. We crossed a deep rift numerous times which  reminded me of a part of the cave I spotted on the survey labeled ‘The Maze’. As we entered The Maze it became immediately apparent why it was named as such; blank, anonymous brown muddy crawling passage that twisted and crossed itself this way and that was all it consisted of. Like the Grecian Hero Theseus I was fully aware of the Labyrinth that was laid out before us and could only hope no minotaur lay in wait. I left behind a trail of arrows in the wall-mud pointing the way out at every turn we took. We came to a deep rift that intersected our path, crossing over it felt a bit ballsy but proved easier than expected. We soon came into a chamber with a prominent draft and countless helictites on the walls and ceiling, we rested here for a while before setting off once again, though we soon realised we were going the wrong way and decided to come back, following my arrows as we went. 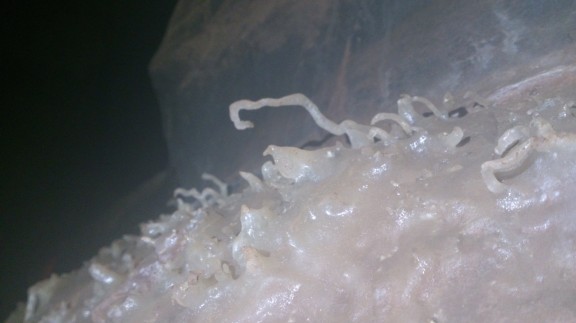 Photo of the helictites on the passage wall

Getting lost and going the wrong way proved to be just as interesting, however, as the whole of the passage was covered in perfect fossils of ammonites, corals and crenoids which provided ample distraction for us as we tried to find our way out. We made it back to the passage with helictites and took a different path, which came out into Cross Rift. At this point we knew we didn’t know the way on, we were simply having fun exploring. We made it halfway down Cross Rift before stopping to decide what we were doing. We sat and talked for a bit and threw mud around for a good length of time before the cld got to us and we walked back. With no plan in mind we simply aimed to make it out of The Maze, at least then we would know where we were.

As we were crossing the deep rift on the way out we heard voices coming from below. Taking a turn and following the rift I saw someone climbing up a pile of chocked boulders to the top of the rift. We asked him where we were and it turned out that we were at the Maypole Climb – exactly where we wanted to be. Once the rest of his group had climbed up and we were off I sent Glen down to try out the climb, which we had been told was sketchy. Glen said it was fine and the OFD stream wasn’t that far on, so Will Wood, Leo and Sam went down with him while Will, Nat and I waited atop the rift chatting. Forty-five minutes later the others returned, thoroughly wet through as Sam had jumped in the deep pots of the big streamway. We decided to set off back out of the cave, finally.

The only detour on the way back out was for a photo-op by the Trident, after that it was straight out of the cave with no messing. 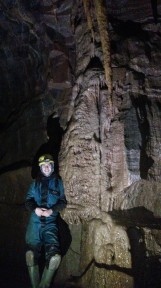 Sam by the Trident 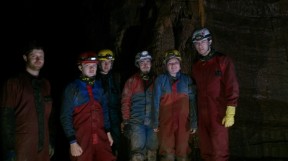 We made it out of OFD at the same time as Plymouth Uni, who requested that we take a photo of their group silhouetted against the warm Welsh sunset. Will also snapped us a photo of the sunset for the SUSS collection. 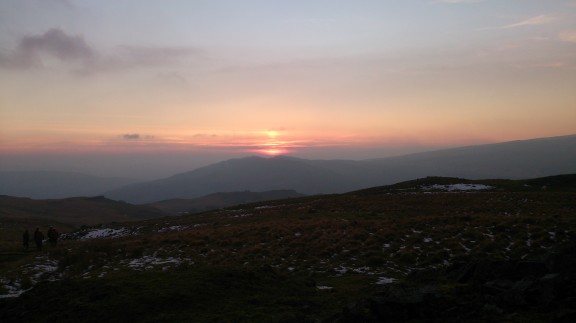 SUSS head off into the sunset

We walked back down to the cottages and met up with the other SUSSantians. After a brief look at the survey to try and make out the convoluted path we had taken, we set off back to the Croyden hut.