Long Churns to Alum Pot It was my first weekend away with SUSS and despite feeling a little rough from the flagon or so of Old Rosie that had been consumed the night before I was excited to be doing some proper caving.  We parked up and put our gear on at the car, including […]

Long Churns to Alum Pot
It was my first weekend away with SUSS and despite feeling a little rough from the flagon or so of Old Rosie that had been consumed the night before I was excited to be doing some proper caving.  We parked up and put our gear on at the car, including the obligatory Primark Penguin onsie, then made our way up to the entrance at Long Churns
We climbed down and made our way to the first pitch. As we were waiting for the leaders to rig the ropes we had a good look at all the spiders surrounding us, I’m sure some of them were looking at me.

When the ropes were ready and my turn came, I descended down the waterfall until I landed on my ass in a big round  pool of really cold water, as I felt the cold seeping down my wellies and into my onsie we continued on through the winding stream passages that lay in front of us.

My first impression as I walked through the cave was ‘holy shit, we’re rich’ as the ceiling looked like it was encrusted with diamonds, although my elation soon subsided as I realised the diamonds were simply the light from my head torch reflecting off the water droplets, still a beautiful sight though!

We carried on through the passages until we came to a pool with a T junction. The passage came out into daylight as we found the Diccan Pot entrance. We took to opportunity to refuel on chocolate and midget gems and while doing so discovered a Vole scurrying about in the bottom of a small shaft by the entrance; after failing to rescue the vole from its pit we duly named it the Vole hole and carried on back down the cave.

A while later we came into a large room where we discovered the Cheese Press. As I watched the more ‘petit’ cavers force their way through the aptly named squeeze I realised that my more portly figure might be an issue, squeezing myself though holes that I don’t fit through, deep underground with no hope of rescue isn’t exactly my cup of tea.
Luckily there was an alternative climb down around the side which looked much more fun than the cheese press and I was reunited with the group at the bottom

A bit further on we came to the big pitch down to Alum pot, I really enjoyed abseiling down this 40′ descent as it was my first real taste of rope work.
When everyone eventually reached the bottom we walked out to the edge to get our first look at alum pot, it had been a wet few days and as a result the view over the edge was spectacular with torrents of water pouring over the edge

At this point Sian decided to scare the crap out of me by casually throwing herself of the huge boulder she was standing on, face first onto the rocks below.

As she lay there motionless feigning death, all the years of first aid training I haven’t had began to kick in, so I did the only obvious thing and tried to help her up, now I may be exaggerating, but I’m pretty sure she threatened to rip my balls off if I didn’t let go of her immediately, after what seemed like half an hour she managed to sit up and make sure she hadn’t broken anything, somehow the fall had only resulted in bruises and after taking a few more photos of Alum pot we started to head back to the pitch we had just come down.

Unfortunately none of us were SRT trained so the only way up was up those skinny little ladders that everyone loves so much, you know, the ones that are really easy to climb and not awkward at all?
I waited down at the bottom until everyone else had reached the top, by the time it was my turn to climb my teeth were chattering with cold and all I could think of was getting back to nice warm showers and a nice warm pub.
The climb to the top was easy enough up until about half way, where it went over an obstacle then trailed over a gap to the wall.
As i reached the wall my weight transferred away from the ladder and I ended up dangling from it, my hands so cold that I  couldn’t even touch my fingers together, let alone pull myself back upright to continue climbing.
After plenty of encouragement from Tom I still wasn’t going anywhere fast so he pretty much had to haul me out himself, with me just taking up the slack and climbing as much as I could.
I don’t know if you’ve ever seen a cow being rescued when its fallen down a big hole, but it’s quite a pathetic looking sight. Well that’s pretty much how I felt when I was getting pulled up on that rope, not my most elegant moment. 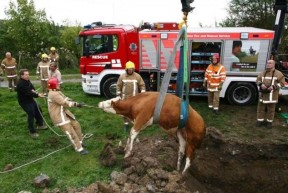 When we eventually reached the top and de-rigged, it was a simple trek back up to the exit where we headed back to warm up in the local cafe.

Despite feeling like a fish out of water, (or a cow out of field), It was an awesome trip and one that I’d like to repeat now that I’m SRT trained and I’d like to go down to the bottom of Alum pot and explore further.