All-in-all the Freshers’ Dales weekend was a very good weekend I reckon, apart from the fact that nobody got drunk enough on Saturday night I think everyone enjoyed it; everyone got at least one trip, nobody got horribly injured, Rachael’s other (6 and a) half turned up gagged and bound in the boot of Ian’s […]

All-in-all the Freshers’ Dales weekend was a very good weekend I reckon, apart from the fact that nobody got drunk enough on Saturday night I think everyone enjoyed it; everyone got at least one trip, nobody got horribly injured, Rachael’s other (6 and a) half turned up gagged and bound in the boot of Ian’s car and the games got quite (nay, very) competitive.

The trip I seconded alongside Helen and Jethro on Saturday was sporting to say the least. Peachy turned up in the morning telling us not to go on half of the trips we had planned due to the high water levels, though he did say that the Old Ing to Dismal Hill trip ‘should be fine’ – so safe in the knowledge that we were going down on Peachy’s say-so we got in the cars, and after several checks of the map we were off with a motley crew.

We arrived at the end of the farm track and got changed. It was then that we realised that we had no idea where the cave was, Ian set off on a recce while the rest of us got kitted up – he was gone for a good twenty minutes before he returned no surer of our goal than when he had left. There was a minibus of commercial cavers just down the track, so Ian went down to ask them if they knew where the cave was and in the meantime the rest of us, now fully kitted, went off on another look for the entrance. We had walked half a kilometre or so from the cars when Ian caught up and told us that we were in the wrong direction – so it was a trudge back to the cars and up the side of Dismal Hill to find Old Ing.

The description we had of the cave was that it was a ‘swallet, about person sized’, we found something broadly fitting that description that went into a flat out crawl in very organic water very quickly, Jethro went ahead and as very sure that it wasn’t the way so we bum-shuffled our way out and set off to try something else. We soon found the exit of the through trip; a very obvious metal lid perched atop a 10m chute – Ian rigged it and I dropped down to the bottom to check we were right – we were,  at last some luck! Unfortunately the others had buggered off to find Old Ing while I was down the chute so I had to prussik out the tight pitch as fast as I could, I popped out the top and was greeted by two very confused looking fell-runners and the sound of Jethro’s voice on the wind, announcing that he had lost the others. “Brilliant, Jethro…” I thought to myself, “now we’re literally on a Dismal Hill with no idea where we’re going because you couldn’t keep up with 4 freshers and Ian” (isn’t that a book by E. Nesbit?). Needless to say we soon found the elusive entrance, which was shamefully easy to spot about 5m from the footpath. 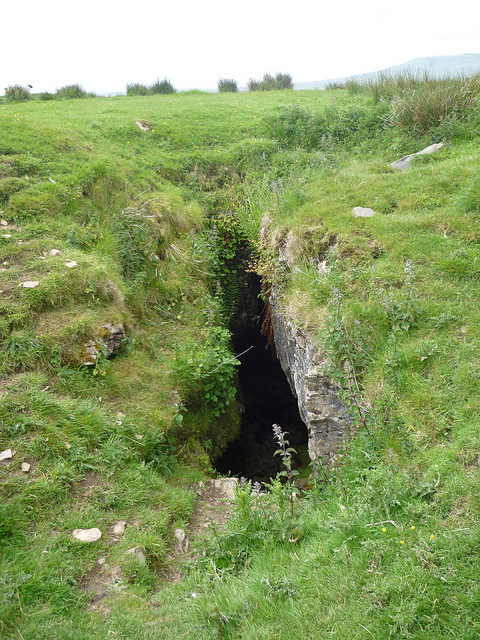 Yep – can’t really see how we missed it

My first impression of Old Ing was a good one – the cave was easy to travel in, fairly pretty with calcite and interestingly formed. After about 50m in this nice entrance we came to a fork in the path, where our rough-cut stream met a lovely smooth phreatic passage with a torrential flow of knee-deep water giving off a powerful and slightly unnerving rumble that reverberated all around us like Dave in a Cathedral after too much milk and cheese. Heading downstream the water steadily got more powerful and dropped quite sharply into a pool that we carefully traversed – only a couple of us fell into it above neck height.

Round a couple of hairpin turns in the streamway the water stopped in a deep pool; a very deep pool. I know I’m on the short side but I tested this pool to above the height of my head and with no sign of the bottom I sent the freshers around the side. There was a large amount of foam in the pool – but the lines of foam around the edges of the pool indicated that the water level was dropping, a comforting sight. Continuing on, the stream soon came to a sump filled to the roof with foam. We had been told that if we came to a sump we should turn ourselves around and find a squeeze in the ceiling – Ian set off ahead to find it, this gave us a short break to catch our breath in the peaceful sump pool.

I found this image of the sump online – it was deeper and foamier when we were there.

While we waited I passed round water and answered the barrage of questions from the freshers – a lot of questions and a lack of silence is a sign of a healthy group of freshers. Also the fact that we had made it this far into the cave in such a short period of time told me we were working with an excellent group of freshers. Ian soon returned telling us that we were on the right track, I sent Woody first, his skinny nature meant he slid through the 20m flat-out crawl without touching the sides; the panting and grunting behind me revealed that Helen and the rest of the freshers weren’t having such a fun time. The crawl was halfway between a flat-out and a squeeze for a fairly prolonged period of time, the loose jagged rocks on the floor didn’t help the ease of passage. We popped out onto the other side into a parallel streamway flowing in the opposite direction to where we came from, this meant that the sump we were at previously did a u-turn into this passage – just to make sure Adam followed the water upstream to meet up with the sump outlet and, judging by how wet and foamy he was on the return journey, I think it was safe to say that he found it.

Once we were all out of the crawl Jethro handed round midget gems. After a short break we headed downstream, now the water was getting really strong. Imagine Tank rugby tackling you repeatedly – that’s how strong it was. I lost my footing a couple of times and almost got swept away, it was very lucky I didn’t because there was a 5m waterfall just down the passage. Naturally I sent Jethro to the top of the torrential flow of water while I explored alternative methods in the ceiling. Unfortunately all I found was a crawl with 6 and a half inches of mud in the floor. Let me tell you; traversing a cave with 6.5″ in your face is no easy task but I powered through. Unfortunately my way didn’t help at all and I had to return. All I achieved was getting my kit very muddy.
Ian and Jethro were making decisions on how to descend the quite frankly perilous waterfall. After 30 minutes of discussion they put up a belay and put belts on the freshers to ferry them down the traverse line on the waterfall. In total it took 2 hours to get all 8 of us down to the bottom. Jethro, bless him, made a total of 26 trips up and down the waterfall to carry kit, freshers and messages between the top and the bottom. After half of us were at the bottom the belay line got carried away by the water – somehow it got hooked inside an alcove behind the fall and no matter what angle we tugged at it, it did not move. This was the perfect time to get out my brand new knife and cut the rope – now there is a 2m tail of rope jammed in a waterfall in Old Ing as our ‘mark’ on the cave.

Far be it from me to be a corporate shill – but buy this knife; it’s cheaper and better than the crap that Petzl brings out.

I carried out a brief recce but the way on was yet again deep enough to submerge my whole body in. A scout around the surrounding bedding plane revealed that the way on was quite obvious but probably impossibly impassable. The traverse line that went across the top of the above-Frodo-height water was cut and down to 3 strands. I sent Ian ahead to check. He took a very long time and our temperature, as well as our morale,  was low. We did what any sane group of cavers would do in a dire situation like this – turned off our lights, put Helen’s strobe on and danced the macarena until Ian returned in 45 minutes, he told us that there was no way we could get 5 freshers across the traverse with only 3 belts. I formulated a plan to return to the surface. It had taken us 4 hours to get to the bottom and we had an hour and a half until callout. This sounded like a recipe for disaster to me – I climbed back up the waterfall, helped a couple of freshers up and went off ahead with them to try and beat callout – Ian’s group followed us close behind.
We hit a choke point (quite literally) in the crawl on the way out – a couple of freshers found the descent after squeezing out the other side. With some group guidance and ungraceful descents we all made it down. Now all that was left was a sprint finish against the strong flow of water beating us senseless on the way out. With determination comes carelessness, I got swept under with the current but a keen Woody helped me out. Disorientated and rather chilly I set off again. As the air got fresher, the cave got dirtier and our spirits got higher we stumbled out of the entrance feeling dishevelled yet surprisingly clean – owing to the fact that we had essentially just been through a five-hour power wash. I had been worried that we wouldn’t make it out by callout because it had been 4 hours to the bottom with 1.5 hours to get out – it took us 40 minutes to get out. I hope the freshers we took realised just how non-fresher-friendly the trip they had been on was. Something on their faces told me they did.
Trip date: 18-10-14