From the testimonials of previous Annual Dinners I gather that this year’s was quite a subdued affair but I’m sure everyone had a bloody great time (your’s truly included). The weather, however, was not on our side; heavy rain plagued the whole weekend. After much deliberation on which cave we were to go down it […]

From the testimonials of previous Annual Dinners I gather that this year’s was quite a subdued affair but I’m sure everyone had a bloody great time (your’s truly included). The weather, however, was not on our side; heavy rain plagued the whole weekend.

After much deliberation on which cave we were to go down it was decided (by whom I do not know) that we should go down Windegg Mine because it was an easy system in which we could mess around for a good while.

We drove out to the small lay-by where Jack Slinger revealed that he had in fact left all of his spare clothes at the bunkhouse. Glen kindly let him know that there was no way that he was going to drive back for them, so Slinger had to make do without any change of clothes.

It was a boggy uphill walk to the mine entrance, which was a painted road sign propped over some precariously placed rocks perched just above an angled plastic pipe. Rather like a group of Italian Plumbers we hopped down the pipe. The passage ahead was a very long and straight flooded mine with a brick arched roof that stretched for into the distance, we trudged down it, passing an obvious collapse fifty metres in. After a little bit of searching we found the ladder that lead to the slightly more naturally formed upper levels.

We all followed Tom along a labyrinthine crawl for a short while before climbing up a small but awkwardly crumbly passage into a low bouldered chamber in which we sat for a while. Dave threw mud around at everyone, Mark in particular, and everyone threw mud at Dave in retaliation. Tom scouted around for the correct way forward, before deciding it was down a very muddy and deep hole which he and Jethro carefully descended, the rest of us opted to follow Dave on what I called ‘Dave’s Way’. This way involved squeezing through a choke backwards into a 3m drop which you don’t notice until you drop into it – luckily the ground was very muddy and I bounced quite comfortably. Instead of letting Mark drop like gold-laden hoarder of SUSS Funds he is I guided his feet carefully onto the single muddy ledge that allowed the drop to be reduced significantly.

We joined up with the others who had chosen to take Tom’s way down and all met up in a T junction where Dave was waiting – armed with numerous balls of claggy dark mud, poised ready to assault Mark the moment he appeared in the passage.

The barrage of mud that pelted Mark as he entered was phenomenal – he emerged furious and launched a retaliation against any and all in his path. The group scattered and Mark turned his own assault against the one person who remained – Jethro. Jethro ran off a long way down one of the passages that lead from the Junction and the rest of us followed him. It came to a dead end after a good while and so we headed back, cursing Jethro for going this far along it. Back at the junction we chose the other passage and followed it to another muddy climb up into a rift. Glen, Dave and Tom were getting far ahead but there was a hold up as it became apparent that the way forward would have to be a free-climb chimney traverse along the rift as the floor suddenly descended a long way down and became much tighter. The front three sped off along the traverse with myself just behind them, however having shorter limbs made traversing much less efficient for me and a chocked boulder halfway along the rift posed quite a challenge.

I could just about hear Glen up ahead and with some difficulty let him know that I couldn’t make it past the boulder. Slinger was right next to me and he said he wouldn’t mind turning back – there was some agreement further back in the group as it seemed some people also didn’t fancy doing the traverse so we all turned back. Following the passage back we passed Jethro and Gamble in an short side passage trying to figure out where it lead. Slinger and myself hung around nearby making crude mud sculptures. Jethro let us know that he and Gamble wanted to try the traverse so Slinger and me walked back to the junction where we previously assaulted Mark.

At the junction we found Dave, Tom and Glen who told us that the rift lead to a slippery mud slope which eventually came out in the boulder chamber we were in just before. Helen joined us shortly after and we sat waiting for Jethro and Gamble. To pass the time we all threw mud at the ceiling to make a huge mud-stalactite. Dave also chose to pour water onto the ground beneath the mud. The pile stuck to the roof grew steadily larger and larger until a glob thrown by myself was the straw that broke the camel’s back – sending a massive chunk of mud plummeting to the ground and onto the sloppy ground. The torrent of brown water that was splashed in all directions was unpleasant. A large amount found its way right into my eye, blinding me on one side. Due to the fact that I was covered head to toe in mud already, wiping the grit out of my eye proved very difficult!

The others arrived soon after and with my eye sore and swollen I followed them out. We walked back along the mine passage towards the exit, pausing briefly to let Dave go for a pee in the streamway.

Tom and Dave climbed out of the smooth pipe first, a couple more followed them and finally it was my turn to jam, wriggle and struggle my way up the entrance pipe. It took quite a lot of effort to make it even halfway before Dave poured his welly water onto me, foolishly I peered up to see if he had finished and got a large amount of Dave’s footwater in my one working eye. I barely held onto the pipe and blindly scrambled up to the top. Mark followed me but after he was out it became clear that the stones lining the entrance were beginning to collapse inwards. Tom held them back while Glen climbed up and out, Glen took a look at the collapsing entrance, below which stood Alex and Helen, after a short think about what to do we all decided that it was best to let the rocks collapse on their own. We told the people inside to step way back and Tom let go of the rocks sending them plummeting into the mine. The two left inside finally made it safely out with some guidance from those on the surface and we all made our way back to the cars covered in thick claggy mud. 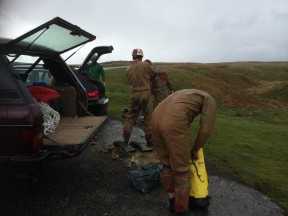 A muddy lot getting changed

After going down the cave we drove to the Tan Hill Inn for a pint. Slinger had to stay in the car in his caving gear, sat in the pub we all felt sorry for him – but apparently not sorry enough to join him!

After a fun night at the Dinner and a hearty Sunday morning breakfast we decided to go into the Buttertubs to have a go at rigging natural anchors. Unfortunately the weather was awful, I was all for going down them in the morning but when we arrived at the tubs it was too wet to go in so we resigned ourselves to going to a tea room instead and took the scenic route home. In the car on the way back Mark and I introduced Jethro to I’m Sorry I Haven’t A Clue which was very enjoyable! 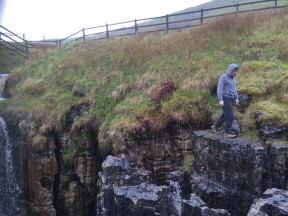 Mark stood at the edge of on of the Buttertubs 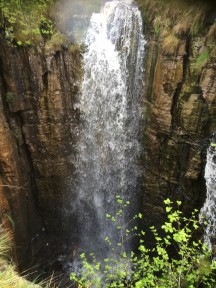 The torrent of water rushing into the tub