I did not know what to expect of Southern CHECC. Apart from the fact that I knew the weekend was to be more focused on the drinking rather than the caving – this broad assumption was made purely based on testimonies of Welsh Caving from other cavers, and my own knowledge of the behaviours of […]

I did not know what to expect of Southern CHECC. Apart from the fact that I knew the weekend was to be more focused on the drinking rather than the caving – this broad assumption was made purely based on testimonies of Welsh Caving from other cavers, and my own knowledge of the behaviours of Southern Caving clubs based on my fragmented memory of Big CHECC. Nevertheless I was paying Jeff to drive me to South Wales and I was determined to force myself down whatever cave I took a fancy to.

The adventure started from minute one when Will revealed to Jeff and I that he had never actually been south of Birmingham – meaning this trip to South Wales was the furthest south the sprightly chap had ever been! As we crammed ourselves into Jeff’s car Will asked the Million Dollar question; “Jeff, do you mind if I drink in your car on the way there?”. Jeff hesitated, a reaction I later learned was merely surprise at someone actually being polite about requesting to soil his car – normally people go right ahead and do it. Jeff said he didn’t mind a moderate level of boozing on the way to Wales, however Will’s definition of ‘moderate’ is somewhat looser than Jeff’s as during the journey we had to stop no fewer than three times to let Will out for a quick sprinkle.

We arrived at South Wales Caving Club before the other SUSS members, something that surprised Jeff as we happened to have got lost on the way and had to take a 45 minute detour. As we pulled up in the grim, wet and hailing Swansea Valley Will opened his door with an almighty clattering as a small mountain of empty beer bottles tumbled out of the car. I was praising the fact I had booked a bed because I was in no mood to set up a 4-man tent just for myself in the freezing and windy weather at 11:30pm when I could be warm inside drinking. There was one solitary tent pitched in the saturated field outside the row of cottages, the pegs seemed to be acting to prevent it from floating away in the quagmire as opposed to shielding it from the wind. 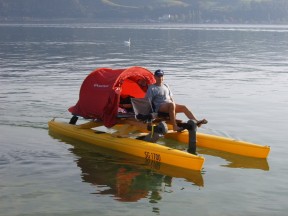 This guy knows the score

On Saturday the only logical choice of cave was OFD2. The streamway was apparently spurting out an abnormal amount of cumecs so nobody was to be going down there. Luckily for us Jeff was doing a day’s training in surveying down OFD2, with some time in the hut beforehand. Will, Rachael, Wanye, a few people from UBSS and I chose to benefit from Jeff’s expertise and get some training so that when we eventually go on expedition we aren’t just sack shifters (though I expect we still will be).

We did a quick loop-survey of the hut itself just to gauge how good we would be at the real thing. Jeff used Survex to calculate our percentage error, stating that less than 4% error was good enough for him. Rachael’s group managed to scrape an acceptable error with 3.8%, your’s truly, Will and Wanye managed to come in way off with a 7% error and UBSS turned out to have a shameful 17.8% error.

We donned our suits and headed up to OFD2 in the blistering cold significantly later than the other parties. On the way up to the cave Rachael stopped and had to run back to the cottages because her contact lens had slipped behind her eye! We waited for her to return, only after we continued up to the cave, hurrying inside to the dank entrance to keep warm. We carried out some surveys of the main passage from the entrance while Jeff took photos – flitting backwards and forwards taking snap after snap and asking us to stay perfectly still. Wanye, Will and Me hard at work surveying

After our quick taster of underground surveying we left the survey kit by the entrance and clambered down further into the cave to have an explore. Jeff, not having been in OFD2 for a while, managed to get a bit lost on the way. We waited for him to get his bearings by heading down every single passage he could find to see which ones looped back before we were confident he wasn’t going to get us stuck down the cave. We set off once again, towards Gnome Passage and down to the left where we encountered a potent smell of phosphorous and four people, two of whom were naked. It transpired that they were a group from Southern CHECC who had decided to get naked in one of the chambers (only the blokes had done so of course) and set off a load of indoor fireworks. We stopped to chat for a while and they told us they had left all their clothes by the entrance, and were planning on doing a hand-over-hand crawl completely starkers. Rather them than us!

We said goodbye to our nude friends and set off further down into the cave, Jeff and Will sped off ahead and we only caught up with them when they had reached a rather bold descent. The options were either to scramble around some rather exposed rocks, all of which were smooth as a baby’s behind, or to slide down a rather tight tube and left gravity do its work. The latter option was chosen by the more slender girls in our group – I wasn’t up for getting jammed in halfway down a tube and being hauled out, so I elected to take the exposed climb.

At the bottom of the climb was the streamway, we followed it at quite a pace. Jeff and Will had already sped off ahead and I was trying my best to keep up with them. I looked behind me to see I was way ahead of the rest but kept on going to meet up with the front two. We waited for a while but it was quite a long time before they showed up. It turned out Wanye had seen Will go over a boulder that the rest of us had gone under, Wanye made the rookie mistake of following Will and not everyone else, causing him to tumble off the huge rock and face-first into the streamway, giving him a glorious shiner.

We made it down as far as we were planning on going, took a small break to enjoy some Midget Gems (courtesy of Rachael) and then Jeff asked who thought that they could lead us out. Nobody responded, but I was sure I could lead us out so I piped up and said I’d give it a go, though my head-lamp has run out of battery (Mark has never given me a Pixa that didn’t start out a trip on low battery!) this meant I got to use Jeff’s Scurion! I donned the Mini-Sun and headed out of the cave, I scrambled up the bold ascent and through the phosphorous chamber. I managed to get us out in one piece, we grabbed the survey gear we left by the entrance and legged it in the hail down to the SWCC.