Thinking back to my time in Eyam with my compadre the Right Honorable William Whalley I guess I could say I had a good time, though as someone who swings from optimism to pessimism at the drop of a hat there was a 50% chance that I would have a good time. Despite the fact […]

Thinking back to my time in Eyam with my compadre the Right Honorable William Whalley I guess I could say I had a good time, though as someone who swings from optimism to pessimism at the drop of a hat there was a 50% chance that I would have a good time. Despite the fact that I am writing this on a grey Friday afternoon in late March, I actually set out on this trip one grey Saturday morning in mid-February – the 15th to be precise.

To put this weekend into some sort of context, on a previous trip with Tommy (documented here), Will had discovered that there were quite a few common Cave Spiders of what appeared to be the Meta menardi species in the Flower Pot entrance to Carlswark Cavern, however there was discrepancy as to whether or not the species was Meta menardi, or Meta bourneti – the latter being a more rare species and if it was to be found lurking in the Peak District it would be the furthest north the species will have been discovered – a minor breakthrough but God damn it a breakthrough nonetheless! Through some of his own hunting Will found that the species were present in some cave entrances in the Stoney Middleton area but not others, despite the fact there is little to no difference between the environments within the entrances. One common factor that did crop up was that they seemed to inhabit entrances that are rarely used – for example one cave’s entrance was found to have no spiders in, but 5 metres to the right of the entrance was a smaller entrance to a very short dead-end cave that was swarming with the things. If you think about it, this of course makes sense, after all; who wants to live somewhere that cavers go? Can you imagine them trodding everywhere with their wellies and blinding you with their lamps? That’s no place to settle down with your spider-wife and raise thousands of spider-babies.

The long and short of it was – there was some investigating to do, and the man to do it was Will.

Science bit is over, you can open your eyes now

Will asked me if I wanted to join him in finding some spiders, and maybe make a weekend of it at his Mother’s house in Eyam – naturally I obliged and we cobbled together some form of a plan.

I am currently without a large rucksack or even a Bernie’s bag (that reminds me – I still have Jeff’s Bag, I must get it back to him soon or may God have mercy on my soul) so this means that packing for a caving weekend is something of an adventure in itself. My tactic is to take the bags I do have and lash them together in whatever fashion I can and hope it holds. 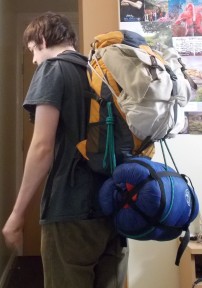 This is how I packed for the weekend

So bright and early on Saturday morning I set off walking to the Bus Station – consciously aware that I was traipsing through Sheffield City Centre looking quite homeless indeed.

We arrived at Will’s Mum’s house in Eyam and sorted out all of Will’s new science goodies – including the aptly named ‘KILL JAR’ – more on that later. With all our gear sorted, our science kit packed and our spirits high we set off walking down to Gin Entrance.

Our plan was to have a fun jaunt into Carlswark for an hour or so and then come out and do some hardcore searching before tea. Our call-out was set for 8pm but I definitely wanted to eat before then! 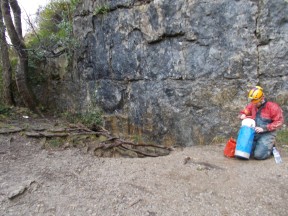 Will faffing around outside Gin Entrance

We arrived at Gin and headed down into Carlswark. It was my first time in a Stoney Middleton cave so I was eager to see what it was like – an eagerness that was misplaced, perhaps? The trip down was fairly uneventful – we waded through the deep water in the main passage, holding the bags high so our Ethyl Acetate or ‘KILLING FLUID’ did not spill and contaminate the water (how considerate of us). We headed in the direction of Big Dig while I photographed the journey as best I could and Will sporadically attempted tangential squeezes to no avail (there’s got to be a downside of having an arse that big). We got down to the Big Dig streamway to find it flowing a little with a little more gusto than we would be comfortable with so we about-turned and headed out.

On the way back I was treated to a shadow puppet show by Will – the full video is shown below. You can really tell he’s a Youth Worker, he had me captivated.

As we headed through the main passageway we heard what sounded like a hoard of Banshees rushing down towards us – the piercing screams slowly reaching an agonising crescendo. Will and I were once told by a taxi driver that there are evil spirits and Djinns living in the dark places of the world, and we should disturb them at our peril. “Don’t go pissing in dark places mate, that really annoys them Djinns, trust us – it’s all in the Qur’an” he had told us, we dismissed it as mere cab-driver banter at the time but now I was certain we had encountered something dark and it sure as Hell wasn’t pleased with us. We sat on some flowstone in the hopes that whatever it was that was heading our way would pass us by without incident. As the blistering wails and moans grew closer and closer we saw what appeared to be bright yellow figures with dim lights atop their heads turn the corner ahead. The figures approached us and we realised they were merely teenage girls on a High School trip – cursing that they ever came down here. Every single one of them lost their footing in the waist deep pools littered down the main passageway and tumbled face first into the water, at least it washed the mud off their face! As they passed Will and I they spotted us, one turned to us and said “You do this for fun?”, we merely chuckled and moved on.

As we left Gin Entrance Will mentioned that he had not yet managed to find any spiders in this part of the system. After a quick hunt around I saw a desiccated beetle and, sure enough, lurking nearby was a big juicy female Meta menardi spider. We headed out and unpacked the science kit ready to take a look around.

I continued to photograph Will as he went around with his little kit, spidering around and such. We were still labeling stuff when the girls climbed back out of the entrance. It must have looked very suspicious to them; Will, surrounded by various jars of fluids and papers, while I photographed him from various angles and holding an atmospheric temperature reader – the girls stopped still, gawping, and asked us a simple question: “Are you guys, like, scientists or something?”. I glanced up at them and paused, thinking how best to respond. “Not officially…” was all I could come up with. Apparently they seemed to think that what I was holding was some form of Geiger Counter because they appeared to be getting worried if it was safe for them to have gone down into a cave that was currently being studied by two blokes with various instruments, maps and fluids. 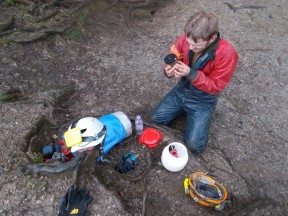 Next – Various other caves

I’ve made this report mightily long so I apologise and I’ll keep the rest of it as brief as I can, we only went into the entrances of the next two caves so hang in there!

We walked to the Delf in Eyam where we sampled a couple of other caves. The first one was Nickergrove mine in which there was a whole colony of Meta menardi  looming out of the darkness at us. 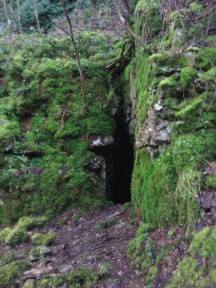 Nickergrove mine – it has a lovely green entrance

Finally there was Lower Bamforth Hole which is a grotty little pit which has been abandoned mid-dig – we though we’d found a Meta bourneti in there when we were studying the samples but we were mistaken. 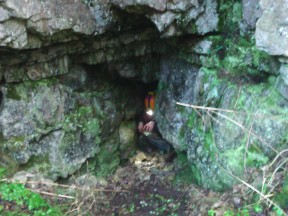 The video below is just a small taster of what it is like to look for spiders in muddy holes with Will. Parental guidance – there is a lot of swearing!

After Lower Bamforth we headed back to Eyam via the infamous Cucklett Church and deftly avoided some bulls. We made it home in time for some delicious game pie courtesy of Will’s Mum and did some general science stuff – the only way to differentiate between bourneti and menardi is by the appearance of their ‘epigyne’ so we compared some photos and diagrams. 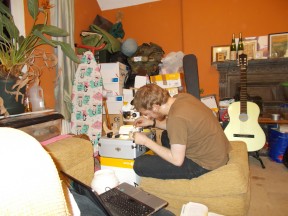 I headed home early on Sunday but Will stayed on to do some extra research.

Good weekend overall! I enjoyed it – apologies for the long trip report guys!