After what had been quite a hard end to a year for me, 2014 was finally starting to look better after leaving Sainsbury and with a much more promising job offer received; I felt I was well overdue for a relaxing weekend with some intense physical/mental stress in the Yorkshire Dales. So I made my […]

After what had been quite a hard end to a year for me, 2014 was finally starting to look better after leaving Sainsbury and with a much more promising job offer received; I felt I was well overdue for a relaxing weekend with some intense physical/mental stress in the Yorkshire Dales.

So I made my way up to Sheffield from the south seas in time to make it to the Cobden and catch up on gossip(Rachael and Wayne…..This is exactly why we need more/any newsletters with a gossip column). Then after staying in the new upgraded spare room in the suss hut (now with a double bed), we made our way to the Bradford.

On the first day myself, Glen, Jeff, Mark, Andy C and Sally went down the ironic Large Pot. At the bottom of the first pitch the cave already gets fairly difficult with a tight awkward crawl which requires feet first due to the tight pitch head at the end. Once I was on the pitch I noticed the rope bag was still above me so to make things less awkward on the decent I climbed up a bit till there was room for the bag to pass, unfortunately when passing my waist I heard a zwooooop, where the rope had started to fall out and half of the 50m rope had fallen from the bag before I could get access to the opening. Fortunately the cave opened up at the bottom, rather than becoming the rift I had feared so I stopped halfway down on the small ledge the rest of the rope landed on and repacked the bag before continuing.

After some crawls and crabwalks we got to the crux of the cave, a crawl above a tight shallow rift with a 90 degree bend halfway, the crawl itself wasn’t exactly tight, but the lack of decent holds made it quite a challenge, especially for the longer specimen. The worst part was the fear of falling into rift though where escape could be extremely difficult considering the size/shape of it. Fortunately after lots of shuffling and moaning we made it through.

From here, there was a bit more crawling and crab walking but then we got to the final pitch, colossus, an open free hanging 40m drippy pitch, which compared to the rest of the cave felt very large. The bottom took us to necropolis a fairly impressive chamber where Jeff began image capturing. 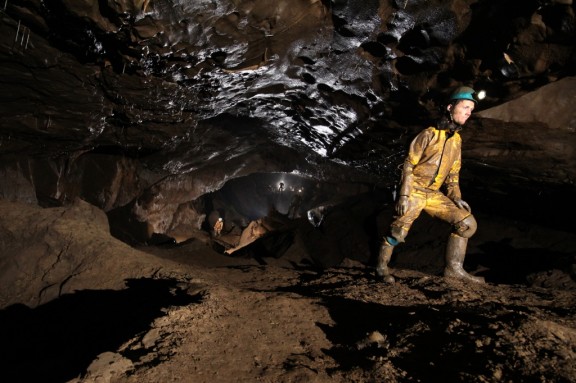 We eventually made our way out with Andy derigging after having rigged the cave. Although we went a fairly short distance into the cave, it took a lot of time for a group this size due to the awkward passageways. We got out to blistering winds and hail, luckily glen was of the opinion of us jumping straight into the landy in our under suits then heading off, my southern blood was very glad of this decision.

The following day I really didn’t want to cave, my absence from caving had made me unfit but the shame I would hold for myself travelling 300 miles and only caving once convinced me otherwise, fortunately it was a trip down Aquamole, definitely a good Sunday trip for the broken.

Myself, Tom, Jethro and Gamble went down the mostly srt hole in good time, then immediately turned around at the sump with me derigging. The cave reminded me a lot of some peak stuff with a fairly confined entrance series leading to decent open pitches but would feel a bit like a waste of a day if done on a Saturday, very good for the wet weather though.

All in all, a very good weekend of caving and to be followed by a weekend in wales for schecc with my main caving club.