After hitching out to Eyam to meet up with Will we formulated a plan for a quick and easy trip into Carls Wark by a route we hadn’t done. After awkwardly descending into the 6m Flower Pot entrance by means of an improvised ladder we found ourselves in small chamber inhabited by many ‘fun-size’ Shelobs, which we later […]

After hitching out to Eyam to meet up with Will we formulated a plan for a quick and easy trip into Carls Wark by a route we hadn’t done. After awkwardly descending into the 6m Flower Pot entrance by means of an improvised ladder we found ourselves in small chamber inhabited by many ‘fun-size’ Shelobs, which we later found out are Meta Menardi/Bournati, more on these lovely lasses later. After a short crawl we found a large chamber/rift (Fall Chamber) which was accessed by a short down-climb. A few more crawls and squeezes later we came across a rather impressive stalactite in a short passage. 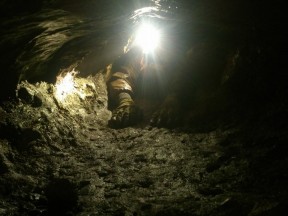 The best crawl had to be the one Will refused to do until I showed him it was safe: superman position through a squeezy crawl finishing above a slightly awkward down-climb. “Can I use this stal. as a hand hold?!” I inquired anxiously, my options limited, a reasonable question from someone with minimal cave experience who does not know how strong inch-thick Calcite formations are…

Next we came to Will’s comeuppance at a tight boulder choke. Simply put: Will’s arse wouldn’t fit through and he required my assistance retreating from his poor decision. I was secretly glad we could not progress further as it was a bloody awkward hole to get into with your only reward a deep, muddy puddle to soothe a screaming wedgie. Our progress back to the surface was significantly quicker than our journey in as we did not need to check the guidebook after every passage. This is when the fun began. 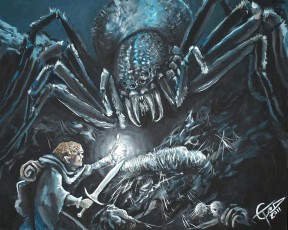 Photographic evidence of myself bravely fending off one of the many spiders.

Will attempted to climb the knotted rope back up the plastic piping whilst I took photos of the aforementioned fun-sized Shelob spiders which are known for catching their prey with silk lasso lines… He was quite anxious about this happening to us to and so was trying to get out in a hurry, making himself rather hot and bothered. The inch-diameter egg sacs hanging from the ceiling were quite disconcerting, not the kind of thing one would like to have fall into their cave suit. As it turns out, Will was not only too fat to get through the cave, but too weak to get out of it. Rather heroically, if I must say, I did some pull-ups on the looped rope to get to the top (good job I go to the Works and Edge instead of Matrix 😉 eh?). Whilst Will was playing games on his phone to distract himself from the menacing glare of the lesser-spotted spiders, I ran up the hill in my caving gear to get his SRT kit (much to the amusement of the onlooking ‘surface-dwellers’ of Eyam) and returned victorious to rescue the poor soul trapped a harrowing 6 metres below the calm world above. We then had a quick wander into the system via Gin entrance before a lipsmackingly good dinner cooked by Will’s mummy and George.

We said the trip would be easy, but of course the proof is in the pudding and in Will’s case – he’d had too much. 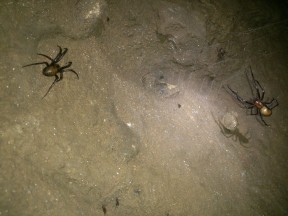