Let Us Move Forwards Together (Into the Mountains) – Churchill A four day weekend… that calls for something good surely? A weekend in Scotland, walking… perfect. Myself, Tom 1, Sam and Jethro met Thursday night at the SUSS hut ready for the long drive up to Edinburgh to meet Chris. The journey went very quickly […]

Let Us Move Forwards Together (Into the Mountains) – Churchill

A four day weekend… that calls for something good surely? A weekend in Scotland, walking… perfect.
Myself, Tom 1, Sam and Jethro met Thursday night at the SUSS hut ready for the long drive up to Edinburgh to meet Chris. The journey went very quickly and was made faster by driving past funny road signs ‘Cockburnspath’ being one of them. We soon arrived at Chris’s flat in Edinburgh and unpacked the car. After sorting out Ice Axes, Crampons and watching a bit of LOTR we decided that being as we had such an early start it was, perhaps, time for bed.As we unpacked our sleeping bags we had a great laugh at Jethro who had a ‘HiGear’ Season 1 sleeping bag. (That would be good whilst camping in snow!!!) We woke up at 6.45 and lay in bed whilst Chris cooked breakfast. We packed our bags whilst, once again, laughing at Jethro who had announced that he was cold in his sleeping bag whilst sleeping indoors.
We packed the car and began the drive to Kinlochlevan. As we saw the hills on the drive up we were very excited, especially as Chris was telling us ‘these are nothing, wait until we get around Glencoe’. COULD NOT WAIT.We arrived at Kinlochlevan and donned our massive expedition bags and set off into the hills. It only took perhaps 10 minutes before we had to stop and check the map. We were indeed on the wrong path and going in the wrong direction. Great start! 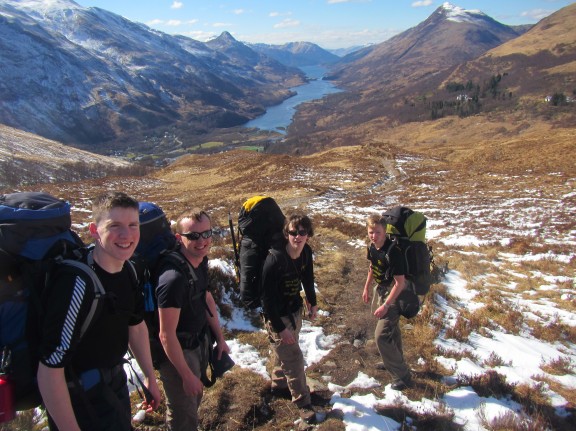 The higher we climbed, the better the view. Nearly made carrying the bags bearable

Everyone was asking themselves the same question ‘how are we going to carry these bags up those mountains?’ There was no whinging… Honest! The higher we climbed the greater the view. After a couple of hours walking we made it up to a lake and had lunch relieved to take the bags off once again. It seemed we would walk 300m and declare ourselves worthy of a break. This was definitely a theme of the weekend. A quick lunch of cheese, choritso and pitta bread (no mayo) then back to the walking. We donned gaiters as we hit the snowline and continued up the hill.Eventually we got to the night’s planned camping area, a frozen lake. We walked across and found a suitable place to pitch our tents. (Shovelling away the snow first) 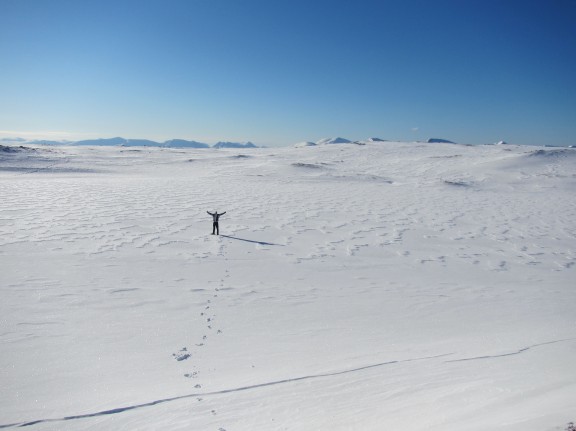 Our frozen lake. Night one

We got the Ice axes out and put on the crampons ready to head up Sgurr Eilde Mor and practise our skills. We learned to do ice axe arrests whilst sliding down the hill so we all knew what we were doing. We headed up a gully and made it to the top (no avalanche!) we celebrated our victorious climbing skills by having a wee dram of whisky at the top (which helped to aid our decent) after asking Tom how to get down he suggested that the best way was to slide and dig the axe in when you wanted to stop. Easy! We had great fun sliding down the mountain and walked back round to the tents.Dinner was a lovely stew made by Tom, followed by a whisky filled hot chocolate and then bed. We were 750 meters above sea level and the temperature plummeted to -15 (unlucky Jethro in your 1 season sleeping bag). In the morning we looked out of our tents to see the most amazing blue sky and mountain backdrop. We were in a snowy paradise. I had a very good night’s sleep thanks to my 4 season sleeping bag and fleecy liner. The others complained that they had been cold most of the night, but we had all at least got some sleep. Breakfast had been provided by Chris; Bacon butties and cereal bars, just what we needed. 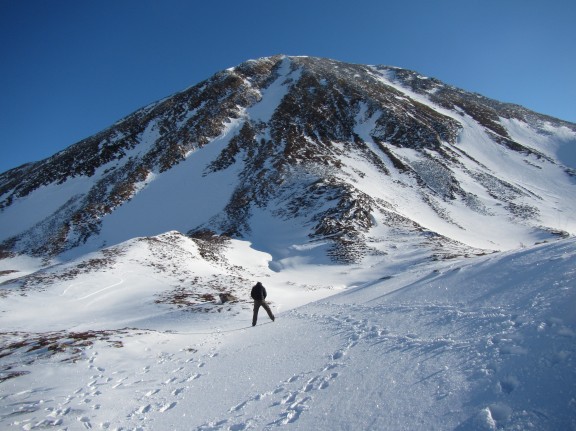 The spectacular view in the morning

We were very excited to start the day’s walking and looked at the mountain called ‘Sgor Eilde Beag‘ we would be climbing. It looked amazing. We put on our crampons and picked up our Ice Axes (we all looked like we knew what we were doing) and lifted up our heavy and somewhat more bulky bags and walked towards the mountain. We tested the snow to see if it was likely to create an avalanche it was (bugger) so we went further around the mountain and started to climb the ridge instead. It was a thrilling bit of climbing as the snow didn’t always hold our weight. We made it to the top and were greeted by a fantastic view.

This was the view from the top of the second hill

We followed the ridge line (having several breaks) around to the peak of the next mountain (called Binnein Mor). From here we could see the top, yes the top, of Ben Nevis. We retraced our steps along the ridge and had lunch where we had left the bags. We then followed another ridge along to the top of our next mountain Na Gruagaichean. We carried on around the ridge one again to the top of the next mountain ‘Stob Coire a Chairn’. The views were amazing. We could have been in the Alps. We slid down the hill into a un-snowy valley and set up camp. We had dinner and briefly made a fire before some port/whisky, some star gazing and then time again for bed.We had a lie in in the morning. Chris woke up in a wet sleeping bag… a foil blanket traps condensation and soaks your bedding as it turns out. Who knew?
We packed up and walked back to Kinlochlevan, visiting and exploring an old shut down hotel on the way. We spent the day in Glencoe and had dinner in the Clachaig Inn. We set out to a nearby Bothy and after some rubbish road navigating by Chris who said “I’m not claiming to know where this Bothy is but… I think I know here were going” we eventually parked up and carried our bags and lots of beer up the hill (with Chris navigating) after an hour we decided that we were, as we suspected, lost. After some nifty navigating we found where we were and made it to the Bothy. As we approached we saw sparks coming from the chimney… Someone was in.We opened the door to find 3 people, a guy and 2 girls all from the Czech Republic. We got on well and agreed we shouldn’t go to bed until all the booze was gone. So by 12.30am we all knew each other very well (may have been the alcohol) and the conversation, thanks to Sam, turned fairly crude. 5.30am soon came around and it was agreed that we should probably go to bed.
We awoke at 11.30 and persuaded Chris to cook breakfast. We had a lazy morning before packing up and going for a walk to find a Scottish cave. We never found the cave (guess who was navigating) but had a nice walk around the sunny forest, we soon got back to the car and began the drive back to Edinburgh. 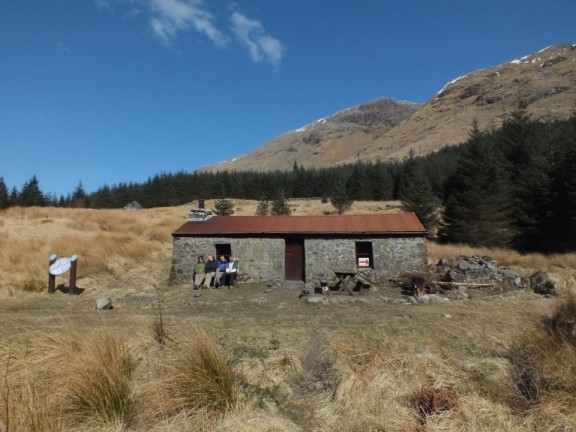 This was the Bothy where we spent a drunken evening

It was a fantastic weekend which we all thoroughly enjoyed and thanks to the faultless weather we have all come away from it, not only with sunburn, but with a slightly tainted view that winter mountaineering is easy.

It’s going to take a lot to top that Easter weekend.