For those of SUSS that haven’t met me, I’m the latest addition ‘Craig’. Some uneducated people namely beginning with a D pronounce it as ‘Creg’. This is my first trip and my first report, so go easy on me. After a couple of tower trips and a grovelling email to Ed, I was told I was allowed to come […]

For those of SUSS that haven’t met me, I’m the latest addition ‘Craig’. Some uneducated people namely beginning with a D pronounce it as ‘Creg’. This is my first trip and my first report, so go easy on me. After a couple of tower trips and a grovelling email to Ed, I was told I was allowed to come to northern CHECC – A weekend caving in the Yorkshire dales that brings together lots of northern caving clubs.

So the Friday night came around and I turned up at the SUSS ‘hut’…only to be told I got the privilege of being cooped up behind Dave in his spacious Micra, with the added company of Sam and Mark. The journey up to Bullpot farm was an absolute ball, we had an excellent playlist with some awesome sing-along’s (who says you need to be in tune) and some SUSS exclusives (Jethro’s piece especially). After a bit of bad navigating in the dark, we finally arrived at the farm house. The night went on to involve a lot of drinking and me in a rather ‘intense’ game of spoons. I mean, I even managed to bend my spoon…but it still wasn’t enough to beat the reigning champion, Brendan.

Saturday morning arrived. After being poked repeatedly in the head by Ed, I reluctantly awoke at an unholy hour to assist in making breakfast. Following food, I was eager to get caving, who knows why? Well this is where the weekend got interesting, after finding a leader from MUSC(Darren), a second from SUSS(Rostam) and a couple of other stragglers (Tom G and another fresher from Huddersfield) we went and got changed. Note to self: don’t try to go caving in a ‘corp school disco’ shirt, as everyone shouts at you (oh and thanks for the thermal Becky).

We ventured off to county pot filled with confidence (the leader had to ask everyone else the direction). As we meandered through the entrance passage we met the first enormous pitch – a whole 7m – a good test for my newly acquired SRT skills. I found it a breeze, but slightly unnerving, as the Huddersfield fresher had no prior SRT training. The bottom of the pitch led to a short climb and after a bit more meandering we approached the rear entrance to spout hall. There’s two ways into the hall, a water fall(wet) way and a tight crawl(squeeze) way.  After a majority vote against the ‘wet’ way we went the ‘squeeze’ way. A few minutes later, after getting through the ‘hard’ part, the Huddersfield group member wished to get out of the cave, so me and Rostam led him out as Tom G and Darren soldiered onward for a short venture. So rewinding all we just did, only going wrong once, we got back to the initial pitch. Again with some of Rostam’s tutoring, a maillon miraculously undoing by itself and a lot of elbow grease we managed to get out of the cave and back to the farm house, safe and sound.

After another wild night, Sam reached the old age of 22(I’m afraid it’s all downhill from here!). Oh and a quick side note, don’t buy a tent for £120, which weighs less than a conventional tent pole. As inevitably it won’t work. On Sunday Dave awoke to this: 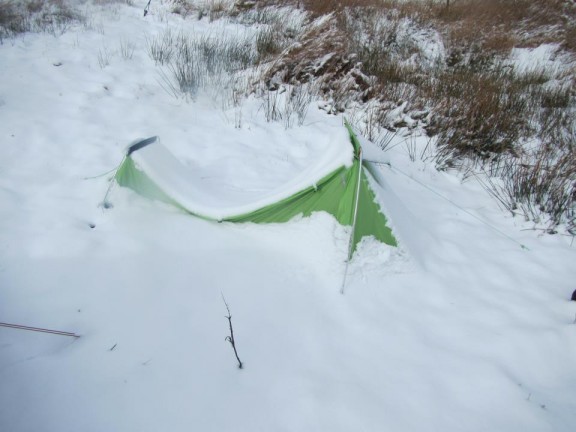 After a bit of negotiating in the morning, me, Tom1, Tom G, Mark, Dave, Rachel, Jethro and the birthday boy agreed we’d like something easy. So they suggested a trip from Lancaster pot to Cow pot, I said fairy snuff. I asked how much SRT is there? to which they replied only a ‘bit’. So off we popped to Lancaster pot. I followed Dave down, hitting my first ever rebelay underground. Erm yeh…someone who has done at most, 10m of SRT, does not class that as a ‘bit’. All I could hear was Dave’s voice shouting ‘I did shout rope free’, whilst I squeezed the stops handle, nervously delving further into the abyss. 34m later, touchdown, everyone else quickly followed.

As Rachel was the only one previously to go down that part of the Ease Gill system, she led the group. By taking a slightly wrong turning we ended up taking a cut through, getting us to cow pot in a grand total of 10 minutes. However Dave’s comforting words of

‘Creg, you’ll definitely die if you fall down there’

at every hole didn’t make me super impressed, when I’m not the greatest fan of heights.

Because we’d been so quick through, Rachel suggested we go to see a cavern filled with stalagmites, stalactites, columns and the feared red tape. This was all the way back where we’d come from! So 20 minutes, some meditation and some Tom1 hailing later we were greeted with the following. Now I’m starting to realise as to why people do this caving thing. 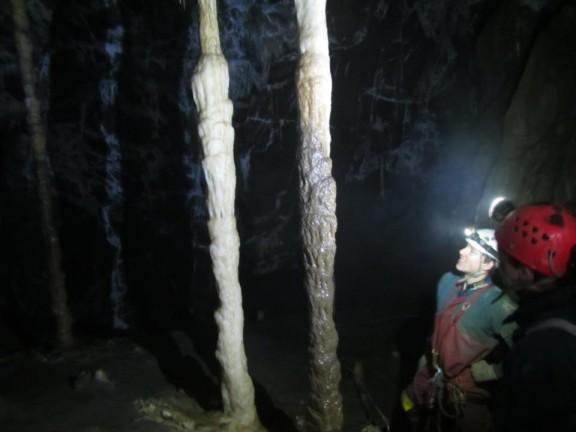 Jefro does seem to be a little ‘too’ happy about the large cylindrical shape.

Right so after a short trip we started our ascent up and out cow pot. Again Dave went first, with me following close behind, well….close-ish. I was number twoing myself to say the least all the way up the pitch. Me, Mark, Dave and Tom G started making our way out from the top of the pitch as the others were still coming up it so we could get a head start on the last bit of SRT. After a short crawl on very unpleasantly shaped rocks we got to the end, Dave stuck himself through an awkward squeeze, only to find that it wasn’t the way. To put in perspective; how awkward. If it had been the way, I would have rather gone all the way back down and up the way we came in. So following a short backtrack we found the right way. Yeh…that didn’t look much better. I don’t think I’ve ever said as many swear words within such a small amount of time before. 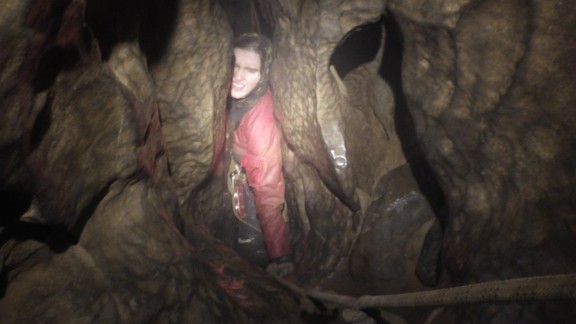 Rachel attempting the squeeze. I’m afraid not even your head will fit through there. 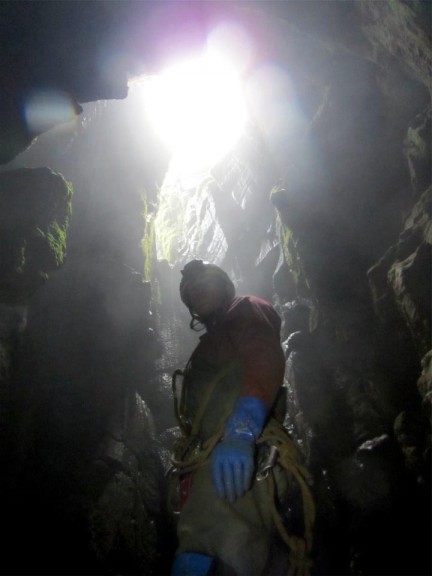 After clambering up the scar, we looked how far we’d come. It took us about 3 hours to do something Usain Bolt can do in less than 10 seconds. After packing up at Bullpot farm, we set off home with a yummy stop off for curry.

All in all, amazing first trip for me guys, thanks!