A spur of the moment decision following a rather epic failure of a bike ride a couple of weeks ago and my inability to learn from my mistakes I decided to organise another ride out in the peaks. In usual SUSS fashion this quickly evolved into a full weekend out at the TSG. So Friday […]

A spur of the moment decision following a rather epic failure of a bike ride a couple of weeks ago and my inability to learn from my mistakes I decided to organise another ride out in the peaks. In usual SUSS fashion this quickly evolved into a full weekend out at the TSG.

So Friday evening Jethro decided he wanted some rigging practice, so off we went to Nettle with Sam in tow and set Jethro off down the entrance with the rope and some krabs. I did not climb down the entrance to watch Jethro rig. At the bottom we grovelled across the flats to find an old TSG rope already on the pitch, but as we were there for practice Jethro carried on rigging. we shortly discovered that the two pull-throughs have been removed and there is some decent in-situ rope instead, which is far easier.

We arrived in Derbyshire Hall after having a giggle at watching Jethro try and work out the best way to fit through Freeze Squeeze and following a brief rest set off back out and arriving back at the TSG shortly after midnight.

The next morning we Joined up wiht the rest of the group consisting of Brendan, Sam, Rachael, Dave and Mark at Rowter Farm ready and raring to head off down JH. I ran off ahead to throw the rope down the entrance and to check if bitch pitch was still rigged, which it was. My plan had been to wait for Jethro, who wanted to do yet more rigging, at the top of bitch however I got an itchy nose so set off down insearch of water so I could have a good scratch.

Followinng some satisfaction I waited a while in the Workshop, where I scared the crap out of Jethro as he crawled past (a fairly satisfying way to pass the time if you’re waiting for people). So, off we went down the alternate route and some fairly expedient rigging meant Jethro was down at the bottom in good time. Having made sure the rope was nice and wet I thoroughly enjoyed the last pitch of Leviathan.

The moment I got off the rope, Jethro grabbed the hard warm pink thing between my legs. My worn simple had gotten quite hot on the descent and Jethro’s hands were cold. We waited for the others to reach the bottom before splitting into two groups. I took a group to take some pics of Salmon’s Cavern while we waited for Brendan and the others to rig Ride of the Valkyries. I managed to get one particularly nice shot without covering my camera in mud so was satisfied. 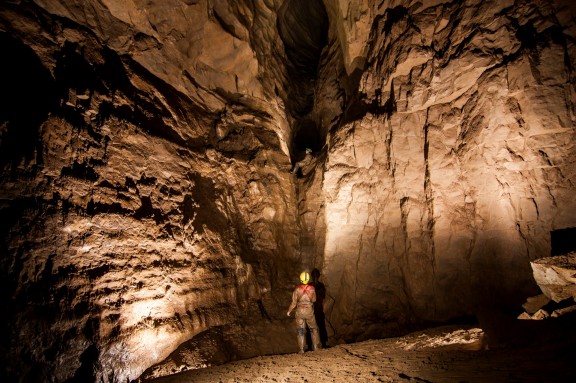 The others started dropping out of the roof shortly afterwards and while we waited Brendan fed us sweets in much the same way you feed grass to a horse. So exchange made, we set off out to de-rig everything.  Until this point I’ve ommitted the current state of the Titan JH connection. It isn’t pleasant. On the way from JH it was a duck, a helmet off and suck the roof duck,  full of shitty water from the farm. Not how I remember it being. Thankfully, the rigging team spent some time on the way out bailing some of the water back towards Titan. This returned it to it’s more usual grotty crawl instead. Much better.

After a quick wash in speedwell we headed back out of JH, thankfully to find that we weren’t snowed in at the top and headed back to the TSG for some well deserved beer and curry.

So we finally get to Sunday and the original reason for heading out to Castleton. Brendan Sam and Rachael had gone back to Sheffield and Jeff and Glen had turned up, Jeff having cycled from Buxton and looking rather damp already. It did seem that the weather had it in for us a little bit as the route we set off on very quickly turned into another case of get off and push up a snow covered track. We decided it would be a good idea to change the plan, especially as Mark was getting a slightly ‘stabby’ look in his eyes. So back past the TSG where we deposited a fairly tired Mark before anything untoward happened and set off past Pindale for Hathersage. Despite the less interesting route and the less than lovely weather, it was still lots of fun.

An tiring, fun-filled (cold and muddy) weekend over we finished back at the SUSS hut for pizza and watching Galaxy Quest. Although it’s lots of faff getting bikes and caving kit and people into a car for the weekend, the variety is definitely worth the extra effort. And when you’re half way up a steep hill or a pitch soaked and muddy just think “Never give up, never surrender!”.