As Peaches and I have taken it upon ourselves to heroically rescue the BCRA and lower it’s average age (but not by killing older members) we tried to entice some Geographers as a trial run for next year… This was done by emailing the Geographers and we got some keen, pensive ‘freshers’ (only one of […]

This was done by emailing the Geographers and we got some keen, pensive ‘freshers’ (only one of them was actually a fresher). We met up at the Notty and set out for the peaks, arriving at the TSG by half 7 and got changed.

We walked up with Jess and illuminated the cavern with some bright lights (very temporarily – yay bisun flexitwin!). The crack team taking the freshers was Adam ‘Offshore Accounts’ Spillaine, Brendan ‘the Beard’ Mackrill, Myself and who could forget of course… Peaches.

We powered along and slid (quite slowly – I corrected this by gentle encouraging kicks). We skated over the mud, no-one fell over – must be a first. We got to some rocks, Peaches and the Geographers got quite excited about some rocks. I didn’t understand. Neither did Brendan. 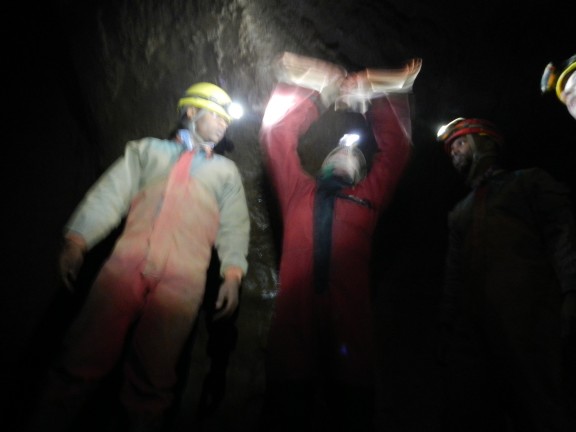 We ploughed on, getting to the muddy ducks. One of the ‘freshers’, Abu Bakr really didn’t like the muddy ducks. Adam took him back out and they went to the pub and had a couple of drinks and a chat. The rest of our intrepid explorers carried on! Some of them had a swim (hee, hee, hee). Contrary to the photo below, no one pooed themselves. 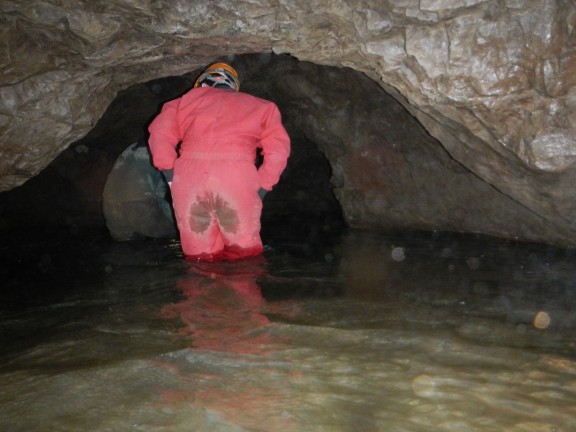 \We also saw some ancient cave paintings, some 4000 years old. 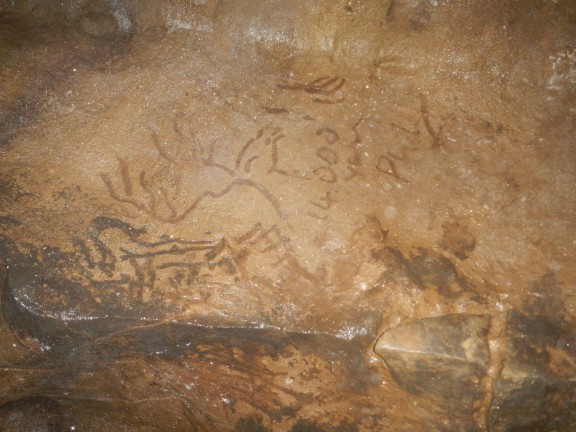 So after all this excitement, Peaches stirred them up by telling them things and then we went to the steam way. We sloshed down the streamway and fossils and features. There was more learning to be had. Should this ever be described by H it’d probably go along the lines of Peachy Teachy Balls. On the way out we came across the boulder in the stream. Mackrill thought he’d go under it – unsurprising. Then Krystina and Owen had to have a go. They then had another go when I said going upstream got double points. Impressive.

We strolled back without washing, like all good cavers, and went back to the TSG and to Sheffield. They all seemed to enjoy themselves and hopefully it’s the start of a few new speleologists. It might mean that Peachy isn’t the only BCRA member under 60…