“Rope free… F**k, No!, don’t come down!” “Why, what’s wrong Rostam…?” “There’s a snake. No, wait, there’s two!”   Welcome to caving in Morocco. Where snakes live down caves, scorpions patrol the camp at night stinging unsuspecting people (Brendan Mackrill), and dogs try their hardest (and succeed) in keeping you awake at night. When I […]

Welcome to caving in Morocco. Where snakes live down caves, scorpions patrol the camp at night stinging unsuspecting people (Brendan Mackrill), and dogs try their hardest (and succeed) in keeping you awake at night.

When I arrived in camp I was instructed that whatever I do, do not laugh at Rostam. Poking my head through the gear tent I see him sat glumly on the floor, bandage over one eye. It was hard not to laugh. What they said about expedition doctors sustaining the most injuries held true in Morocco.

On the first day at camp we went for a walk up the hill and found our first bit of wildlife; a slow worm. I went to prod it, but since it didn’t react I felt it was okay to hold it, so me and Liz had fun holding it. For the next two weeks we experienced lots of interesting animals, including scorpions which like to hide in peoples bags but aren’t too fussed about fighting giant caterpillers, lots of snakes (mainly in caves) and spiders with beards. We also had great fun going scorpion hunting in the dark with Tim’s UV torch.

On my first day of exped I was in the team ‘The Smugglers’ with Mike, Brendan Mackrill and Tom1. Our first area was Chiker which was about an hour and a halfs walk from camp. The first cave entrance we found we named ‘The library’ because it acted as a dump for lots of old school books, but unfortunately it was just a chamber and choked up. Wanting to scour a promising looking hill we went to search for somewhere to keep our bags whilst we walked around. As we walked up to a good looking hiding spot we realised it was home to another cave entrance, this time it went. Brendan rigged and we followed down, me and Mike surveying. Ten meter ish pitch leading to a slope down into a chamber and a right hand turn to some crawling stuff with pretties. Awesome cave for our first find.

What I found most exciting was when I found the entrance myself. This happened for the first time when I was in the Admam region and we were in a hill bashing team. The others were ahead of me, and I wandered behind, walking on the other side of a big rock. And suddenly there’s a massive hole in the floor. I call the guys over and we start to rig it. I went down first, landing on a massive pile of dead sheep. Seeing that it went further and didn’t choke up Brendan came down and we started to explore and survey it. The slope which was littered with lots of bones and some recently dead animals led to a climb down into crawls all leading to a small main chamber filled with stals and flowstone. It was an awesome cave, but Brendan didn’t see it that way, mainly for all the dead things. So I had to tell him off for moaning, and saying this was the first cave I’ve found on my own so I was of course bound to be extremely hyper. 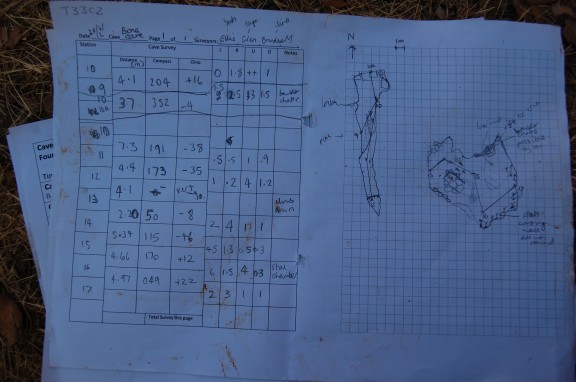 Lots of other caves were found, and some known caves were surveyed. In one I went down which Ali named ‘Nam due to Rostam coming out of it covered in sweat and blood (he fell down a boulder slope; expedition doctors eh?), a very impressive 70m shaft ended in a massive chamber. 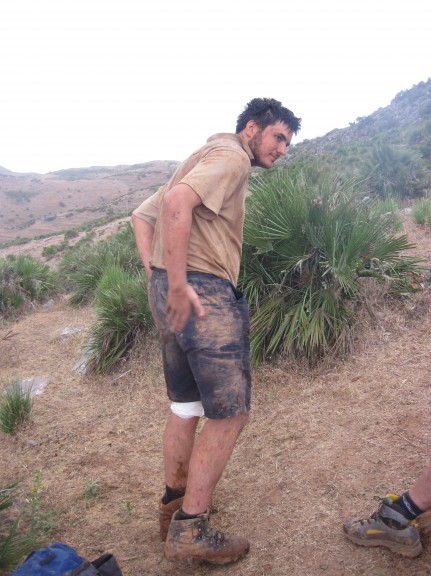 Coming back from some of the caving days was fun if a vehicle was involved. This meant fitting about 10+ people in, so there was lots of crumpled up people sitting on or being sat on by many big bags. 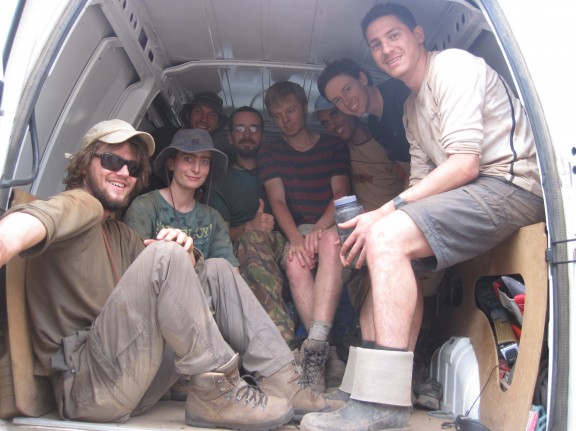 The vehicle fun continued when we were on our way home. From camp to Fes 14 of us went in a minibus. With our bags strapped onto the roof and the fun of scorpion fighting over we all piled in and was ready to go. The middle seat was the best. Strapped to two thin wooden planks with garden twine, but not attached to the van in any way, every time we turned a corner (which there are ALOT of on the pass down the hill to Taza) or the driver braked a bit too suddenly (which he also did alot of) the seat would rock back and forth.

As well as all the caving we did we also had some great times eating the most amazing food cooked for us by the farmers and generally hanging out with each other.

Arriving back in England was a shock after 2 weeks of relative isolation. Pouring cold water from a tap, without needing to collect it or filter it. I have also come to the conclusion that there are too many buildings, too much concrete, and not enough donkeys. Bring on SUSS Morocco 2014!