Okay that’s kind of a lie…they were jackdaws, but crows fits my title better. Anyway, it all began on a Sunday morning. The sun was shining, the birds were singing…nah who am i kidding. It had been raining all morning. It rained when we drove to the cave, it rained whilst we got changed, it […]

Okay that’s kind of a lie…they were jackdaws, but crows fits my title better.

We drove to Eldon Hole in two cars, and considering we had all three Toms on the trip we thought it only right that they travel together. Rostam and I went with Dave in his car. 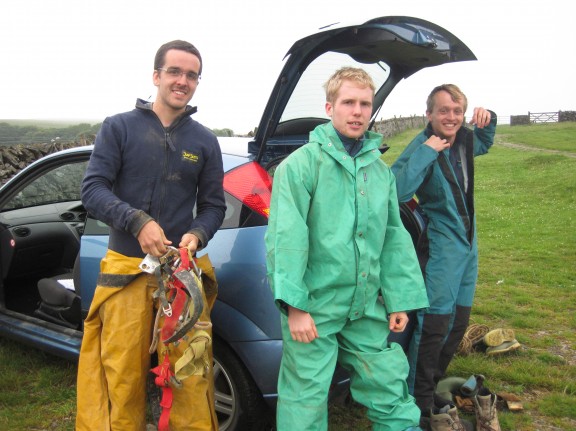 Tom1 and Rostam went down the North side, me and Dave went down West and Tom2 + 3 went down East. After a bit of gear faff on the way down we all got successfully to the bottom and were greeted by four jackdaws. They were quite young and scraggly, and obviously incapable of flying out. We all wanted to rescue them, but without any tackle bags we were a bit stuck. Luckily another team of cavers were just on their way down, so we commandeered one of their tackle bags to haul the birds out in.

Each pair went up a different route to the one they had come down on. I went up the North side, which was very muddy at the top in the scrambly bit. Pulling up the rope was a bit of a faff because it got stuck between two rocks so I had to go part way down to unhook it, but got there in the end.

After coiling up the ropes we trudged back to the cars, in the rain of course!