Packing all of the gear and everyone into three cars was hard, but we managed it and were on the next leg of the journey to Rodellar in Spain. As soon as we went over the mountains it was amazing how the scenery changed- from lots of green to lots of yellow, and a huge […]

Packing all of the gear and everyone into three cars was hard, but we managed it and were on the next leg of the journey to Rodellar in Spain. As soon as we went over the mountains it was amazing how the scenery changed- from lots of green to lots of yellow, and a huge increase in temperature. When we arrived we went to look round the town, have an essential ice cream and decide on the campsite to stay at. I think we chose well, found ourselves a nice secluded spot and started to set up all our tents and the tarp. 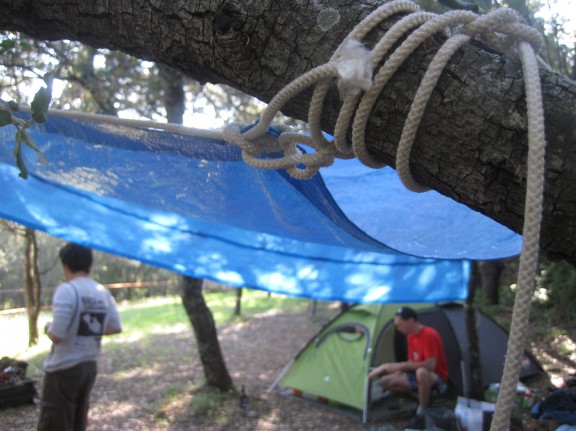 The first full day of Spain and we were all looking forward to going canyoning. I joined up with Scott’s car team and we were on our way to Balces. 100m from the campsite the car suddenly stops, and does not want to start again… Not ideal when we are already strapped on car space. But fear not, there were canyons within walking distance of the campsite. We waited round, watched Scott’s car get towed away, then we went and napped at camp and went for a swim down in the river as it was too late to start walking to anywhere. 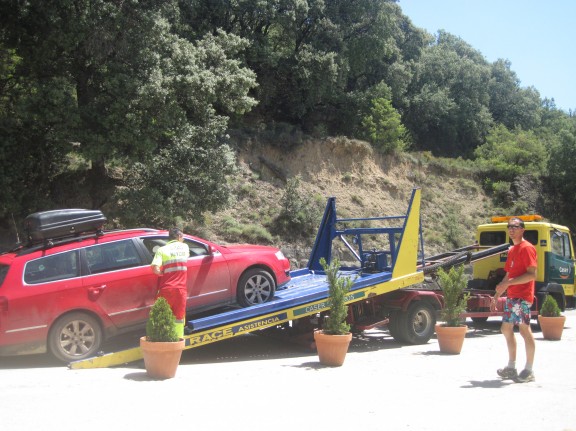 The second day gave me my first canyonning experience which was shared with Ali, Rosie, Lil’ Chris and Tom1 at Oscuros de Balces. After a sweaty walk, donning wetsuits was hard work but once we were in the water we cooled off. The second pitch was down a waterfall and into a plunge pool, and the third pitch of around 4m we did as a jump. My first ever jump so it was daunting but fun. We got to a narrow swimming bit with high walls on either side, and what did we find but a mouse! Tom carried it all the way to the end so it could escape out of the canyon. Near the end we had about a half hour stop while Rosie tried to learn how to do a forwards roll into water…she didn’t quite manage it, the video evidence is quite amusing to watch 😛 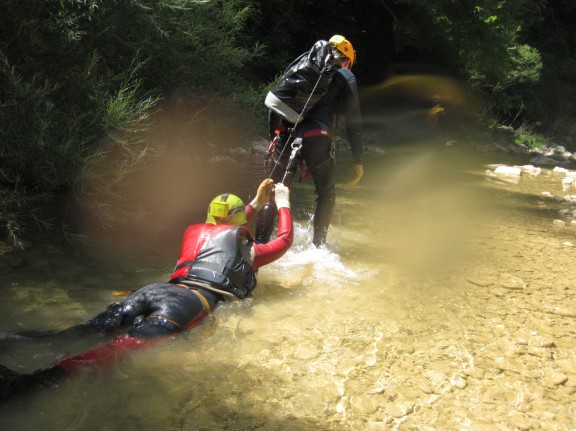 Tuesday was a day of non-active-activity. Quite a few of us felt non-exercise inclined so Ali, Alisa, Tom1, Chris, Lucy, Sema and me went for a touristy trip to a little town whose name escapes me. We wandered round, looking at the cool buildings, some went round a church-esk place and then we went and had lunch.

At night there was a tremendous thunderstorm, the thunder was louder than I have ever heard, and the lightening lit the tent up between each thunder. It is a shame I didn’t get out and take some photos, but when you are tired, getting out in the rain isn’t appealing.

Wednesday 29th June found Rosie, Henry, Katie, Tom1, Chris, Sema, Pointy Tom and me descending Rio formiga, and I think this was my favourite trip of the whole week. The walk is not long, and it is through woods most of the way so nice and shaded. In the canyon there were lots of toboggans and jumps. We got to a pitch head and the guided group behind us had caught up with us. Their leader came over and said ‘this is a jump. Who wants to jump this?’ ‘I do!’ Sema pipes up, so the rest of us jumped what must have been at least 7m. As I fell through the air there was a point where I thought ‘hmm I should hit the water, but im just falling faster and faster’ then I hit the water, surfaced and the adrenaline gave me such a buzz. Fantastic jump.

In the evening we all went out for a very tasty meal because it was Steve, Lucy, Sema and Tom2’s last night.

The next morning, Rosie, Tom1, Sema, Chris, Henry, Katie and me went on the 2.5 hour walk up to Barranco de Otin. We woke up early to leave before the sun made everything too hot. It was a tiring walk, but I enjoyed it a lot. The scenery was stunning. 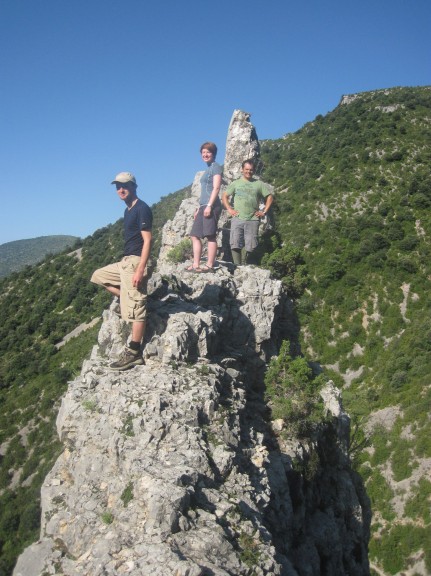 Otin was unfortunately dry, but that didn’t actually matter too much because the canyon was a series of pitches, so it was fun to just do them anyway, and we all had a laugh which is important. There were two very exposed pitches, which were only 40m ish but amazing how high things look when they aren’t in the dark and surrounded by walls.

Due to the dryness we didn’t put our wetsuits on, so went through the canyon not getting wet. So when we got to a stagnant and smelly pool of water we tried our best to avoid getting a dunking- lots of faffing ensued from this but it was amusing to watch faff. 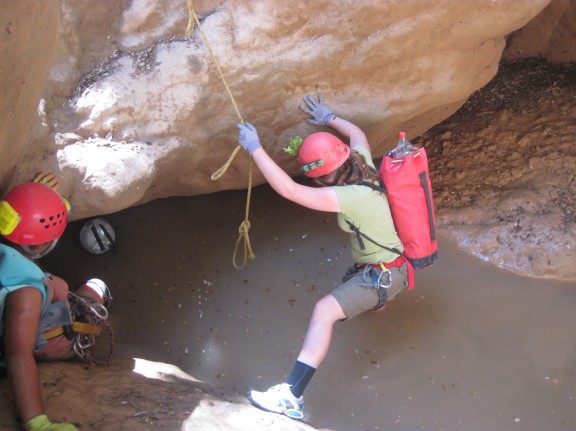 On Friday the same group of us minus Sema went to Peonara Inferior, nicknamed ‘face smash’ canyon after Sema knocked her nose and grazed her face earlier in the week. The start was a lot of swimming, and although the scenery was amazing and the water a lovely colour, it did get a bit boring towards the end. Fortunately as soon as we got too bored the water gets a lot more powerful, working its way through rocks and rapids. Navigating this was fun, but with more water than it had I think it would have become scary and too powerful. After a lot of fast moving water it suddenly becomes calm again, in the last swim out to the footpath. The walk back to the car was enjoyable, with some huge conglomerate rock formations.

In the evening I went out with Rosie to the bottom of the hill to do a bit of climbing. We were short on time and Rosie was eager to get some climbing in, so I just belayed. We also took some photos along the way. A good evening.

It felt like we had just got to Spain and got going in the canyoning, but it was the end of the week and time to start making tracks home. Due to Rosie’s car being in France, and us in Spain, the insurance company had booked us a taxi to get back, which was certainly an experience as a Mercedes with tinted windows rocked up. 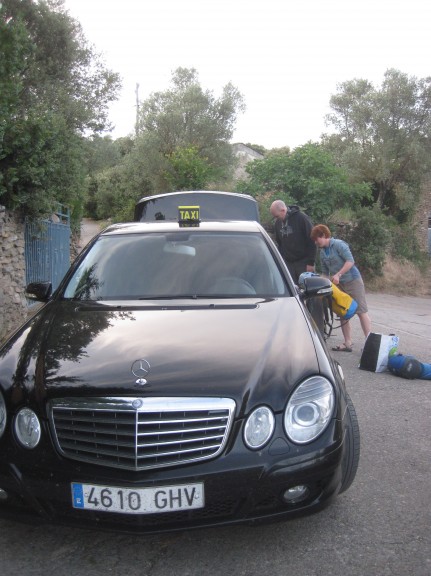 The taxi drove rather quickly, so we got to the garage around half 10, making very good time. Onwards to Bordeaux in a healthy Oscar with me (successfully!) navigating using the map. We met up with Scott’s car in the Decathalon car park and then we travelled in convoy onwards to somewhere for supper. Stopped at a town and had an amazing pizza which was very filling and very tasty. After supper we drove on until we got to a place to stop for the night. Decided the service station with police patrolling it was no good, neither was the place where a lot of chavs were hanging out. At half 2 we found a nice aires de service and slept either on the grass or in the cars.

I woke up at about 5, and pottered about until everyone woke up/ was poked awake by me around 7. Then it was time to hit the road once again. We made good time and got an earlier ferry at 12. Once off the ferry it was a shock how many cars were on the roads, big difference to toll roads or mountain roads. Going via Rugby to drop Tom off me and Rosie headed to Sheffield and got back around 7pm.

A fantastic holiday and I look forward to many SUSS summers to come!