I havent posted a trip report in a while and last week was jam packed full of caving so thought I would share it… Titan I have never been down Titan before and after many pesterings off Rosie we finally got out there. Off we toddled with tackle bags full of rope and descended down […]

I have never been down Titan before and after many pesterings off Rosie we finally got out there. Off we toddled with tackle bags full of rope and descended down the entrance shaft. As we stomped down the passage and through the puddle I got my first glimpse of the window looking out over the main shaft. All I could see was darkness, which nicely put across the sense of scale of the place. Luckily Rosie had her Scurion so I got a proper look over it all.

Down we went, over the traverse and up the streamway. The climbs were rather technical, and I struggled in places but they were still fun. We went through a crawl and turned around at the handlines. Coming out wasn’t as bad as I imagined, it is just one big pitch after all, and you get a nice opportunity to take in the view. Slow but steady works for me, and we were soon both back out around midnight which I think is a rather respectable time for an evening trip.

The weekend of Northern CHECC was upon us. Driving down to Bull Pot Farm with Tom, Chris and Rostam was entertaining. In the last half hour Chris found all the Monty Python songs on Tom’s ipod…

On Saturday MUSC Mike, Rostam, Rob from UBSS and me went for a potter about the Easegill system. Nice long trip, saw lots of Easegill I haven’t seen before, like the calcified bat, and also some places I have seen (nice to be able to recognise where I was at some points in the trip). 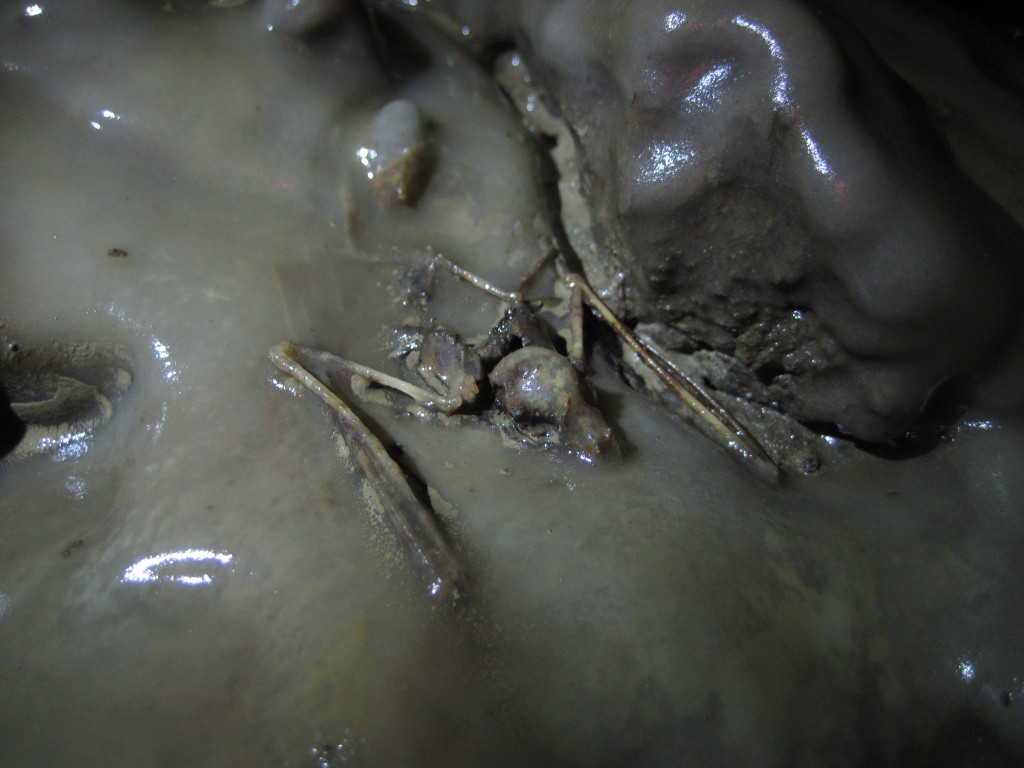 On Sunday Brendan, Mike and me went down Lost John’s. Such an awesome cave! We did centipede pitch and battleaxe traverse down into the streamway. After a bit of a stomp along that for a while and spotting some potential photo places, we headed on out.

Rosie hatched an exchange plan for Elizabeth to Crumble/Beza so on Wednesday evening me, Rosie, Chris and Tom went for a play in Nettle. After a lovely scenic drive there and spotting a pregnant sheep we thought was dying we got to the top of the hill ready to cave.

After splitting into two teams and heading down our separate ways we soon heard each others voices. Me and Rosie went through the tight bit first, and after expecting metres and metres of crawling and horrible ducks and things we thought the connection was like a walk in the sunshine. I think we were lucky in that it has been very dry recently, a bit more water and it wouldn’t have been so nice. Soon we all met up, Rosie and me put our srt kits on and headed out Beza/Crumble. I thought this pitch was quite awkward in parts, but at least that made the entrance pitch seem okay. After derigging the entrance we were all out and feeling good about an awesome peak trip none of us had done before.