About a year ago, the British Cave Research Association (BCRA) held an event to introduce students to the basics of cave science, aiming to inspire a new generation of cave scientists. At this event (which has continued as multiple weekends this year), Graham Proudlove (Manchester University), a researcher in subterranean fauna, gave an introductory talk on cave biology. In this session he related the decline of cave biology since the days of Mary Hazleton, and expressed his desire for a new generation of cavers to take up projects. In response to this, those present decided to form a group dedicated to designing and carrying out cave biology projects in the UK.

Picking up more members (including myself and Louise) along the way, this polynymous group has yet to get very much done, though not for lack of keenness. Our members have been attending the more recent BCRA-led workshops on cave invertebrate sampling and identification, and with Graham’s explosive Facebook debut we have almost too many projects to consider. We are also looking at becoming a BCRA Special Interest Group (but perhaps we should actually start some projects first!)

One request that Graham has sent our way is from the Sandstone Ridge Trust. This is a heritage lottery funded volunteer group which runs projects and conservation work around the Mid Cheshire Ridge. A beautiful range of hills, this sandstone ridge runs across Cheshire from Frodsham to Malpas, affording stunning views of otherwise flat farmland, all the way to the Mersey estuary in the North and Wales to the west. The ridge contains some small cavities, presumably wind-formed originally due to the insoluble nature of the rock, but in most cases enlarged by human activity. Caves were often dug out for the sand that could be found withing, but some were used for other purposes (see the Civil War stables under Beeston Castle). The Trust has an interest in the caves (mostly archaeological), and would like a biological survey undertaken.

Cheshire being Louise’s home turf, she took the lead on this and arranged a meeting with a member of the Trust to see some of these caves. I dutifully volunteered to come along, and after a pleasant evening at her parent’s house (in which I was plied with various forms of alcohol due to it being her father’s birthday), we set out to meet our contact at Harthill, near a few of the caves.

Our contact, Peter, is a retired Performing Arts lecturer with an interest (and a post-retirement masters degree) in archaeology. We met at the church in Harthill and walked up the hill to meet the Sandstone Trail, which traverses the top of the ridge. It was a humid day, but not unpleasant, and Peter filled us in on the history of the Trust as we walked. Their interest in the caves had arisen after some successful archaeological digs in nearby sandstone caves, but they had wanted an idea of the biology before they began, so as to minimise their impact. The ridge is not public land, and is owned by various estates, but the landowners in this area are happy for us to look in the caves (although this complicates the situation a bit elsewhere on the ridge).

After walking past the path down to Queen’s Parlour a few times, I discovered that the entrance was marked on my phone’s maps app (Maps.me). This open source, offline maps app allows users to mark locations, and is used by outdoors types, so many cave entrances are marked on it (and GPS location files can be loaded onto it), so I’ve been using it for some time. Peter was very excited by this, as the caves aren’t usually listed on maps, and insisted I show him the app later.

We eventually found our way down to Queen’s Parlour, the largest of the three caves. This was a large space, mostly at standing height, about 10x10m in area subdivided by small columns and chambers. Sunlight can be seen from the end. It was clearly used often by the local youths, with abandoned bottles marking the entrance, and graffiti and carvings within. The character of the sandstone caves is interesting, being far drier than limestone as they aren’t water formed. The walls were flaky, so graffiti was often falling away, or layered. The soft rock is also easy to cut, so heads and other features have been carved. Myself and Louise searched the cave for any life we could find with our headtorches, and photographed as much as we could. This is by no means an exhaustive or scientific list, but a brief description of our findings follows below:

The most prevalent inhabitants of the cave were small (~5mm) flies (Diptera, classic looking fly), which covered the walls in great numbers. Crane Flies, some with orange/red eggs attached were the most mobile, their flying around making it hard to get a good picture. We also found a few larger (~5cm) brown Caddis Flies. There was a moth near the back, which I’m fairly certain is a Herald moth, which are known to overwinter in caves. There were a few spiders present. These mostly appeared to be a single species, with brown abdomens with lighter coloured spots. Some preliminary googling suggests these could be Cavity Spiders, but this is a strong maybe at best. We did not find any spiders that looked like typical Cave Spiders (Meta spp.). Strings of silk hung from the roof across the cave, but it was unclear whether this was from past spider webs or another source (Louise suggested glow worms?) We also found woodlice, a millipede, and a dead ground beetle. The inhabitants of the cave were restricted to the wall, the floor being dry and sandy. Some of the dead flies were colonised by a fungus, which was very interesting to see but too small for my phone camera to focus on. 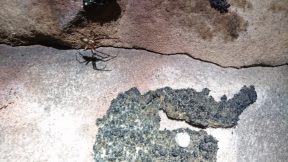 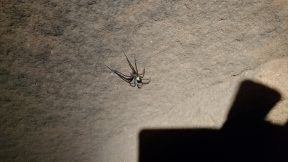 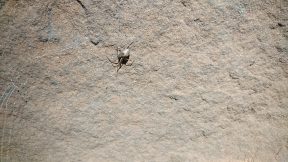 Some of the spiders – most looked more like the bottom pic 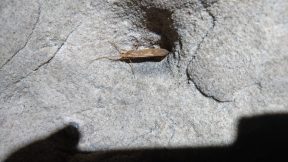 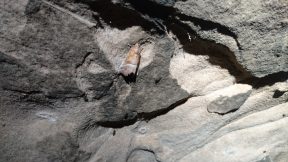 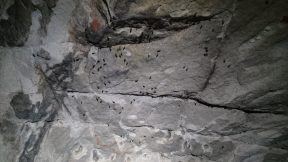 Not the best picture, but the dots are small flies.
These covered most walls, though not always in this abundance 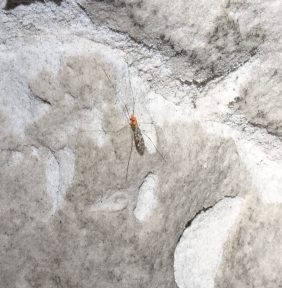 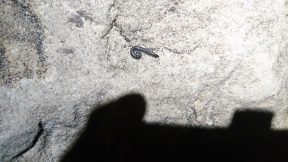 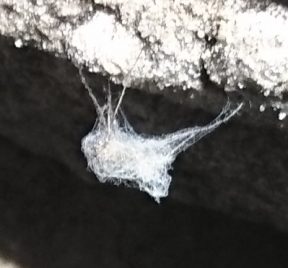 Fungus covered fly – maybe they didn’t all come out bad

The next cave was Bloody Bones, just below the trig point at Raw Head. This is named after a story to scare children apparently. The etymology of these caves has been lost somewhat, so Peter couldn’t tell us why Queen’s Parlour was named as it was – in fact, when he’d written about these caves last he’d accidentally swapped the names due to them being mislabeled in an official source. The children’s tale actually helped them determine the correct naming of the caves – it mentions Bloody Bones is sometimes called Rawhead, like the peak beneath which it sits.

Bloody Bones is much smaller than Queen’s Parlour, only being a few metres deep, with most of the cave appearing to be backfilled. A subset of the species found in the last cave were found here – the flies, spiders, and caddis flies that seemed to us the main species were found here also. The only real biological difference was the tree roots forcing their way into the ceiling! 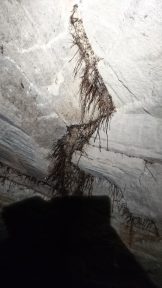 Tree roots in the ceiling

Peter had told us not to get too excited about Musket’s Hole, and his reasoning became clear as it came into view. The ‘cave’ was a wind carved basin in the side of the cliff, with a small roof but almost no depth. It is accessed by carved steps in the side, and affords a pleasant view of the forest. Again, no record is made of where the cave got its name. I’d speculate that it would make an excellent defensive point, being hard to access, but that’s probably an overactive imagination on my part. We didn’t spot any cave life, but Peter was interested in a carving of a pyramid with an eye in the centre, as in the American dollar. His research had revealed this was a symbol associated with secret societies and the masons. I didn’t know how to tell him it was just a meme. 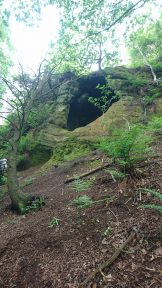 We walked back to the car and bid farewell to Peter, after he gave us a copy of ‘The Ridge: Rocks and Springs’, a book the Trust had brought out on the quarries and wells of the ridge. Myself and Louise then bought some food from a nearby Co-op and had a picnic on Bulkeley Hill, which was very pleasant in the Cheshire sun. We plan to return with other members of the Biology Group, and survey the caves both topographically and biologically.