I’ve done a few dives over the last few months to try and tidy up the resurgence sump of Peak cavern. This suffers from stuff being washed into it when the show cave floods, and over the years a variety of plastic chairs, Christmas trees, and plastic baubles have been removed. On a recent dive […]

I’ve done a few dives over the last few months to try and tidy up the resurgence sump of Peak cavern.
This suffers from stuff being washed into it when the show cave floods, and over the years a variety of plastic chairs, Christmas trees, and plastic baubles have been removed.
On a recent dive to plan a DCRO exercise I noted the level of junk in the sump that was offensive to my desire to see a clean cave and also might possibly be something to get caught and stuck on while trying to dive.

A particularly offensive part is the air bell near the beginning of the sump (the Schoolroom) who’s walls are covered in polystyrene beads in a layer about 1m high. It is believed that these are the remains of various fake rocks that have been used in the past for film / TV work and ended being washed in here.
Getting rid of them is not an easy task and will require multiple trips with a sieve and some container to put the beads in.
I had a trip which removed some planks, a Christmas tree trunk, a wire rack for the sale of chocolate bars and a tackle bag full of assorted cans, wire, plastic net and clothes pegs. However there remained what appeared to be a large PVC dingy wafting gently in the current.

On my trip last Sunday I found the water to be milky with a vis of about 4 inches rather than the normal good clarity. This made me pay attention to not letting go of the dive line and get lost and die and so I was surprised to actually be able to find the dingy. I was expecting to swim past it without being able to see it.
It was fairly near the upstream end so I was able to dislodge the rocks it was hiding behind and wrestle it up to the surface. There it got even more awkward as it was half full of water and I decided to try and take it out through the showcave rather than swim it back through the sump.
I went up to the showcave and Irene let me leave my dive kit in the office and walk down over the rope walks. Skipping happily down the passage that we don’t often get to visit, I soon filled a tackle bag with all the polystyrene rocks, plastic drain pipe, iron rod and 2 (non matching) socks that I could see. Then I removed the bungs from the dingy and stabbed it a few more times with my dive knife to let the water out.
At that point I noticed the 8 feet long 6 inch square length of timber that was also floating in the pool 🙁 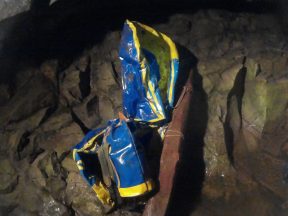 The wood was hauled back up to the showcave and stashed at the bottom of the rope walks. Then I went back to the sump carefully looking for my dive knife.
The boat and bag of trash were all removed and disposed of in a better form than just being dumped in the river.

If you see something, do something.
Let’s leave the caves with less crap in them than when we went in.