Sunday 29th April Present: David Botcherby, Jake Sturgeon, Olly Hall, Ryan Quinoa On Saturday night we were looking at trips in the Caves of the Peak District. I was interested in the Gentlewoman’s Shaft to Youd’s Level, as I’d heard legends of the longest coffin level in Derbyshire. Discovering that you there was no clear […]

On Saturday night we were looking at trips in the Caves of the Peak District. I was interested in the Gentlewoman’s Shaft to Youd’s Level, as I’d heard legends of the longest coffin level in Derbyshire. Discovering that you there was no clear reference to Gentlewoman’s in the guide, I promptly decided that it sounded like a problem for tomorrow. I was right.

We set off the next morning quite late, after waiting to supply some keen first timers from Birmingham with some kit and doing some washing up. Olly had been down the entrance of Gentlewoman’s (but no further) so said he would recognise the car park. On the instructions of ‘a quarry near Matlock Bath’, I directed us to the nearest quarry to the Youd’s entrance, a decision I think was reasonable, though perhaps misguided.

On the off (or more likely, on) chance that we couldn’t find the entrance, I thought we should pick up the key for the Youd’s entrance from the lead mining museum. This turned out to be absolutely massive, which basically made my day, and carrying that made up for any trouble later on. 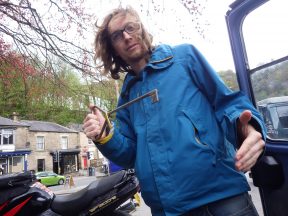 We then set off for this quarry that I’d chosen. The first road I tried to take us down was an incredibly steep Italian style narrow Street. The second ended in bollards after 50m. It was already going well.

Finally finding a road that went past the quarry, we found the road that went closest was a dirt track over the top of the quarry. This was a great opportunity for green laning in a 2CV, which is fully recommended, though we did have to get out of the car. Olly tried to leave us behind, but I soon caught up, key in hand to tap the back and remind him he wasn’t just off by himself.

After around 10 minutes of wandering, Olly realised that this was in fact not the correct quarry. Luckily we hadn’t actually put on caving kit, so we simply went for a wander. Spotting some mountain bikers and attempting some dy tooling with the humongous key, we soon arrived at the top of the quarry. After a long period of indecision, we decided that instead of retracing our steps, we’d try to find an alternate route down.

This lead to some brilliant sketchy slope sliding, eventually ending near where we began in a small concrete hut with some great graffiti. Admiring this art form for some time, and appreciating the vast quantity of smashed glass and abandoned cans, it was then time to return to the car.

I still wanted to get underground (at least nominally), so I convinced the others to drive to Youd’s entrance, because at least we actually knew where that one was. Parking in Matlock Bath was a bit of a faff, but we eventually found a space near enough our destination. 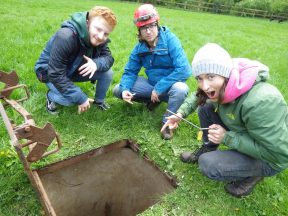 Reaching the entrance in a small park, I was the only one who’d opted to actually bring a helmet/light (although not wellies or kneepads), so I went in, leaving the others at the entrance. I enjoyed attempting to keep my shoes and jeans relatively clean and dry along the crawl, looking out for any raw sewage, as I’d seen described in a TSG trip report in my earlier research. Passing some deep and clear pools, I came to a place where the water would have gone over my shoes. Not keen for super wet feet, I tried to traverse over the pool. The walls turned out to be quite malleable, adding a bit of challenge to this, and muddying my jeans nicely. I then proceeded to jump down into a shallower part of the pool, completely soaking my shoes anyway (d’oh). It looked to get even muddier further on, and I didn’t want to keep the others waiting, so I turned back, repeating my traverse trick. While I was gone, the others had gone down to have a look with phone torches, and by the time I reached them Olly and Ryan were trying to leave Jake down there, whose light had run out. Finding a nice bit of pottery in the crawl, I came out just in time to scare off a small family.

While me and Jake had fun on the swings, Ryan and Olly had a look see if they could find the stream entrance. This was deemed too spicy when they realised you’d have to be mostly submerged to get in. I discovered some wild garlic here, so had a nice snack while I tried to invert the swings. Jake found a great use of the key, hooking the back of the swing to launch me forwards. We probably looked like quite an odd little family. 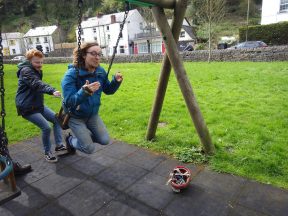 Correct Use of Key

Now we’d had our fun for the day, it was time to head back to the Orpheus, passing by the museum to reluctantly return the key. On the way back I mused about how odd it was to see a 2CV driven in the same way as a Nissan Micra, while Olly blared stoner rock though the sound system. We finished tidying the hut, eating as much of the leftovers as we could. NUCC had left us a nice gift of two camembert, which were greatly appreciated at film night.

I’d like to have another crack at that trip sometime, though I think I’ll find out where the entrance actually is next time