Last weekend, I volunteered to carry down Speedwell and decided that if I was going caving that I should do a trip into Peak at the same time. Dragging Alex and Helen into my plan we decided during the week that we would carry, then head to Peak via White River and Moose Trap. I […]

Last weekend, I volunteered to carry down Speedwell and decided that if I was going caving that I should do a trip into Peak at the same time. Dragging Alex and Helen into my plan we decided during the week that we would carry, then head to Peak via White River and Moose Trap. I arrived in Castleton late on the Friday evening and headed for the pub. There weren’t many still around after the CDG meeting so it was a small party of Alistair, Rob, Helen, Mike Butcher, Benji and Ash. We all disappeared back to the TSG and took part in the noblest of caving weekend traditions – having a good old moan and bitch. Everyone wander off to bed leaving Helen and I to our discussions. About 4.50am, we decided we need to totter off to bed if we were going underground the next day and accidentally woke up everyone in the members room when Helen was looking for Rob and her sleeping bag.

We missed the first boat due to disorganisation and a late start and Rob was very amused by Helen’s apparently inability to walk in a straight line. Armed with cake and rope, we set off towards Speedwell at 9.45am. Kathryn had issues with her zip on the club oversuit which required both Benji and Martyn to help her. Martyn decided to help by thoroughly lubricating Kathryn’s zip in washing up liquid – I’m not sure what purpose this served but it seemed to amuse him for a while. With her helpers assistance, Kathryn was properly attired and we all toddled off towards the boat. 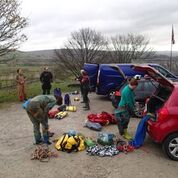 In every party there are always the naughty kids at the back and this trip was no exception. Kathryn, Martyn and I were sat right at the back and behaved ourselves impeccably. Mysteriously the boat turned itself off part way down the tube due to a rogue tacklebag being moved (by a wiggling individual), Martyn turned the isolating switch off and we chugged off again. I’ve never been down there before and it’s actually pretty cool. The tour guide’s speech was actually fascinating and I listened to the whole thing with one ear open.

We decamped and began wading through to Whirlpool Passage. I have seen many sumps and I can confirm it looked very similar to all of the rest of them. We watched them all get changed with some helpful mockey and commentary. Kathryn’s crotch was suddenly very foamy due to the washing up liquid reacting to the waist deep water in Speedwell – ‘All lubed up and ready to rumble’ (Kathryn Vernon, 2017). With joy in our souls and a song in our heads, we bumbled off with Rob’s bottles.

After pottering towards Main Rising, we went off towards Cliff Cavern. We dropped Rob’s bottles off and headed back towards the divers. When we arrived back they hadn’t emerged so we settled in for a long wait. 10 green bottles was immediately shot down so i-spy it was to be. Unfortunately there are a limited amount of things that you can ‘see’ in a cave so that ended pretty quickly and the cold began to creep in. There was a lot of chatter about complete rubbish. After a while we saw a very damp Martyn emerge from the water, followed by Benji and Jess. Being the lucky individual that I am, I helped to wrestle Martyn out of his wetsuit with as many innuendos as I could possibly make. 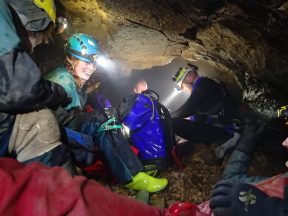 We packed everything back into the bags and a very motley crew traipsed back out of Speedwell to the boat. This was where our large party was to split. Benji, Martyn, Jess and Kathryn went back to the surface and my obligitary wail of ‘but I hate caving!’ emerged. If I’m honest the last thing I wanted to do was get back in the freezing water but apparently I was the one who organised the stupid trip so underground I went. Alex, Helen and I headed back in from the Bottomless Pit with Jess so she could lock us in. There’s something very final about someone locking a padlock on you in a cave and leaving with the key! 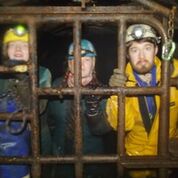 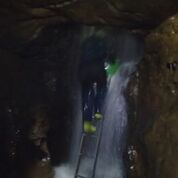 We pulled our SRT kits out of the tacklesacks and suited up for the prussick; I perked up a lot about caving after the first pitch and decided that I probably liked it a lot on reflection. Helen accidentally dropped her tacklebag down Block Hall with a very impressive thud and had to go back down for it. At the top of Block Hall I curled up in the tube waiting for Alex and Helen to join me and to try and keep the little body heat I still had. Or as Alex put it ‘you like you’ve crawled in there to die’. 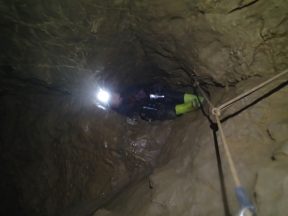 Alex didn’t seem to really appreciate the crawl connection to WR. He was very impressed by White River and was flitting around like a kid on Christmas morning. There were lots of ‘ooohs’ and ‘aaahhs’ and ‘wow that’s amazing’s’. 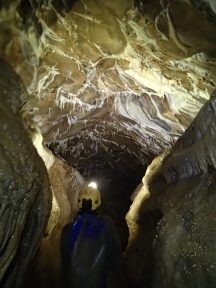 We traversed over Nameless and started posting Alex down a grotty section into Moose trap. It was the wrong section but was very funny to watch as there was a lot of tacklebag abuse – a little further back we found the correct entrance and filled down like in a typically British fashion in a nice orderly manner. Moose trap is rigged on an odd concoction of spits (and bring-your-own-hanger plates) and P-bolts; with some of the spits a little dodgier that others.

Moose trap is amazing! The first section feels like a Yorkshire Cave in miniature. There are perfect little bore holes and its all very cutesy. Then you go down the third pitch. Jesus Christ! It is suddenly very big, very cool and very wet. The subsequent pitches wouldn’t look out of place in West Kingsdale. They are phenomenal and so very beautiful. I wasn’t expecting much down there at all. The downside is that they are very very wet. The water gets everywhere because the pitches have no deviations in them so you are always descending or ascending in the waterfalls.I headed out before the last pitch because I was stupidly cold to my core and was being an utter wuss. 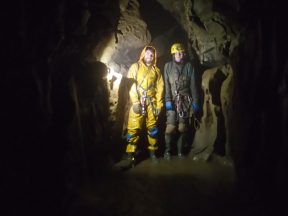 Helen and Alex near the bottom of Moose Trap

When I was prussicking out I made the mistake of looking up to clip in my cowstails. Do not recommend. 0/10 for enjoyment.  Water ran straight down the inside of the front of my AV and made me very very cold all over again.

I have absolutely no idea why we thought it was a good idea to carry (cold) and then sit around for ages (freezing) and then decide to do White River (cold) and then Moosetrap (very wet and very cold) then back into Peak in thin-ish furries. It was a bit of a topsy-turvy trip with a little bit of everything thrown in – but would have been immeasurably improved by a wetsuit!

Heading out of Moosetrap, I tried to get my leg over a rock for the rifty bit out. Now this required a few more brain cells then I apparently had at the time because I lifted my leg to hip height and then attempted to step up without my hands. This obviously didn’t work. The only thing that was going through my head at that point was ‘You are currently being less successful than a man with a broken leg’. My second attempt, in which I used my hands to push off the walls, was far more successful. At the top I waited for Helen and Alex whilst performing interpretive dance numbers to Agadoo and the Macerena in a bid to keep my body heat up. We disappeared down the rest of White River and headed towards the Ventilator. 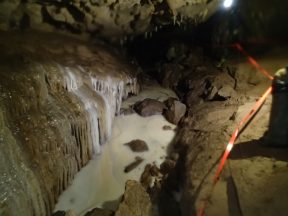 I amused Helen getting onto the the third pitch – ‘I didn’t even know it was possible to beached whale onto a pitch head’.  What can I say? I have many talents. I also remembered why you shouldn’t try to fit yourself and a tacklebag down a ladder at the same time (your face gets squashed and you can’t see a thing). We had a slow-ish crawl through the Trenches. I whooped when I saw the familiar gate at the start of the Trenches  and Helen seemed just as glad to see it. We all poured ourselves through the gap and traipsed out towards the exit. Our very relieved party emerged at the TSG, after around 11 hours underground, and were very pleased that there were warm showers. A big thank you to Alistair, who was a star, with cups of tea and helping us wash the muddy rope! A quick dash back to Sheffield for a curry at Helen’s and then I drove home to Halifax. Snuck in at 12.58am and asleep before 1am. Good trip!

Photo credits are all Alex’s (NUCC)