On Tuesday evening, Rob posted to the SUSS group asking for a bottle carrier down JH on Friday (27th). It would be a long, hard trip, joining him and Lydia going up Cliff Cavern for Rob to dive Cliffhanger sump, then out Peak to join the others at the TSG. I thought “Why not; I’ve […]

On Tuesday evening, Rob posted to the SUSS group asking for a bottle carrier down JH on Friday (27th). It would be a long, hard trip, joining him and Lydia going up Cliff Cavern for Rob to dive Cliffhanger sump, then out Peak to join the others at the TSG. I thought “Why not; I’ve not done enough caving recently?” and in my tired state quickly signed up. Typically, I didn’t consider that this would land me in for 4 days of caving, with cleaning up P8 on Thurs, and a full weekend following. This seems to be my style now: caving in short controlled bursts. I was resigned to it.

The prognosis was looking poor for the trip by Friday. A chance encounter with Phil Wolstenholme on Wednesday had not been inspiring about the condition of the sump (“It’s been checked, and it’s choked”) and seeing Rob Eavis on Thursday had not improved things. I had hoped that Rob (Middleton) would be more optimistic about the dive, but I was having no such luck. Friday was a gloriously clear autumn day in the Peak District and Rob was only interested in one thing: Climbing. Unfortunately, we’d all agreed to go caving and so (after expected faffage) we 3 set off at 3:20 in Rob’s car from my house. I’d like to say that we set off determined to prove everyone wrong, but in reality none of us could wrench our eyes from the endless blue of the afternoon sky.

After changing at the farm into my wet P8 kit, I was feeling just about ready to set off, mostly because I needed to get moving or I’d freeze. Rob planned to pay for us at the farm, but hadn’t brought enough money (“It’s gone up since my day!”) so Lydia paid instead. We trudged over to the entrance at about 4:30, getting a feel for the weight of the bags. Rob only needed two 3 litre bottles so I was feeling fairly confident I could handle the one that I was carrying on my back. It was only when I got to the entrance that I realised that Lydia had two bags to carry through the cartgate: her bottle and the rope for Leviathan. I foolishly offered to carry one. She eagerly accepted, after informing me that I had to take the bottle as she needed the krab on the rope bag. I swallowed this feeble excuse and watched her descend the entrance pitch, flanked by my new twin sons, Hefty and Befty, who were about as eager to get through the cave as I was.

DISCLAIMER: Before I talk about this trip, you should know that I am not the hero. I’m a bit out of shape at the moment and was already tired from a fairly easy trip down P8 the night before. I had warned Rob before we went down that I’d be slow, but I’m not sure he fully understood. I didn’t think anyone could have be so slow going down JH as me (that is, until a joint SUSS/NUCC trip showed me how it was done on Sunday)

The cartgate and me have never got on too well, especially when carrying a bag, but I’ve always been fairly quick through owing to my slender frame. Not this trip. Each bag was heavier than any I’d previously had to carry through, and I was scared shitless of smacking them about, so each move was made slowly and carefully. The Hefty/Befty double act was a sight to see, really. I’d be negotiating Hefty through a crawl in front on me when Befty would decide he wasn’t getting enough attention and jump down onto my feet, making a nasty clang. As if this wasn’t enough of an impediment to my progress, I was determined on getting lost down there too. There is a part of the rift where you have the option of going up or down and, despite having been through a few times before, I was sure you had to follow in down. I was so sure, in fact, that I went down the wrong way before I even got to it. This lead to me dragging each bottle out of a sketchy chimneying climb and hoping not to drop them. After this ordeal, even Bitch Pitch was a sight for sore eyes!

The rest of JH was mercifully easier, as the tight part was done, and I could offload Befty on to Lydia as the rope was now being used to rig. I flew down Leviathan (after Lydia tightened the bolts!), stopping only to imagine how the freshers would handle the tight rebelays on Saturday. (They handled them fine as it turns out!). Miraculously reaching the bottom without being eliminated by rocks, I rejoined Rob and Lydia at the bottom, two and a half hours after we started.

The walk to Cliff Cavern was nice (after I’d gone the wrong way again) and the prussik easier than I expected, probably owing to the new (slightly ridiculously named) Camp Turbofoot that I’d spent my Hidden Earth money on. I was glad to learn that we would not be attempting the tyrolean to Joint Effort, as we were going in the other direction. Cliffhanger itself was a series of climbs up precarious choss piles, which I quite enjoyed, until we reached a chamber that lead to a crawl. Rob informed me that this was the last place he could kit up while standing, and pointed me out the lead weights he’d used to mark it (also, that I was going to have to carry said weights out).

Rob kitted up in the same resigned mood that we’d carried with us the whole trip. Phrases such as “I hate cave diving” and “Why do I do this” were muttered frequently. I came to understand this a bit more when I went to look at the sump. This amazing prospect of exploration was a wet gravel bed at the end of a flat out crawl. Before he went in, Rob confided in me that he was only going in to “tick it off” as he’d looked at it two years ago, and he was moving on from “grim shit” like this. Rob handed me his camera as he couldn’t be bothered with the faff. As I watched intrepid explorer shuffle backwards in to the sump I was mostly looking forward to a nice, cold half hour nap in the crawl.

Awaking from my nap to the sound of bubbles, I realised that Rob was coming back, and speedily too. I was quite unprepared for what I was about to witness. Rob flew out of the sump like a cork, shouting “WOOOOOOOOO” repeatedly. I was confused: Did crappy dives always have this effect on him? I soon understood what the fuss was about, when the hoots resolved into shouts of “IT FUCKING WENT”. It turns out that the gravel bed in the sump had shifted over time, opening up the way to ~60m of dry passage. The significance if this was not lost on us, being not only a significant addition to a well explored system, but also possibly the westernmost point in the Peak System. A pity that the camera was “too much faff”. Sod’s law, I suppose. 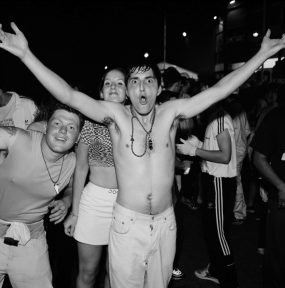 Rob was about as hyped as this guy

Feeling pretty energised by this turn of events (and a quick stop to scarf down a mars bar), we packed all the diving kit pretty quickly and made a good pace back through the cave, speeding down the abseil and de-kitting at the bottom. This energy carried us all the way through Speedwell streamway, down the bung, and to the bottom of the ladder up to Colostomy. It was here that I remembered how out of shape I really was, and Hefty dug his claws in once again.

If I thought my time through the cartgate was slow, my tim

e in Colostomy was an eternity. I had never actually been through the famed crawl of regret before and so I was hoping to breeze though it and boast about it afterwards. No such luck. The other two use chest tapes for their harnesses, allowing them to use them as makeshift belts to clip a tackle sack to. I however, with my torse, and my determination not to wear my SRT kit for some reason, was at a disadvantage. This resulted in me dragging the bastard all the way with my hands. I’m sure I heard Hefty chuckling as he got caught on a rock for the third time in a row. Rob, however was still on a high from his discovery, and so occupied himself by making fun of me for not being young and fit from the back. Even promises of cold beer were not enough to motivate me to go faster, and when I reached the ladder down from the ventilator and realised I was only at the start of the trenches I almost gave up. Luckily, an extremely crushed wagon wheel that Tommy had given me the day before saved me. I discovered it was best to eat this lying in

my back, sprinkling chocolate all over me. This brown shower (no, not that kind) gave me the boost I needed to get through the crawl.

After Peak Freshers, I know the way out from Treasury pretty well. What I didn’t know was that Peak Cavern had just put out all their Halloween decorations, and I mean ALL of them. This lead to a pretty Spooktacular exit from the cave (read: laughing at skeleton dogs). One decoration was even motion sensing, though it failed to elicit a scream from tired cavers such as we. Our final challenge was simply to exit the showcave. The key refused to open the padlock on the gates, and for a second we thought we were gonna be stuck there until morning. Imagine cave rescue’s surprise at finding us sitting outside the cave! Rob was just about to cut the barbed wire above the fence when Lydia worked out the problem: We were using t

We returned to the TSG at about midnight to find the revelry in full swing. There were half naked SUSS everywhere, and we were informed that we’d missed the suspended sock wrestling. We quickly dekitted and joined the fun, though I have to admit I didn’t quite make it to 4am, retiring around 2:30 after blowing Hefty a kiss goodnight. The rest of the weekend was pretty good, but someone else will have to write a report on those, as I’ve gone on long enough