This trip started off with the best intentions. A 9am trip to Dr Jacksons on Bank Holiday Monday – sounds simple. We woke up to the news that Jack didn’t get off work until the early hours and couldn’t make it. So at 7.33 in the morning we were trying to agree on another trip […]

This trip started off with the best intentions. A 9am trip to Dr Jacksons on Bank Holiday Monday – sounds simple.

We woke up to the news that Jack didn’t get off work until the early hours and couldn’t make it. So at 7.33 in the morning we were trying to agree on another trip to do at short notice as we weren’t keen on doing Dr Jackson’s without an experienced party member – I didn’t particularly want to do Winnats Head after the last time when I lost bloodflow to my hip, so Giants to East Canal was decided upon.

As I packed for the trip the usual checklist as done in my head; helmet, light, underclothes, oversuit, change of underwear, a water bottle, SRT kit. I arrived in Jreg’s car at 8.10 accompanied by my kit and a tuppaware box full of porridge as I’d been eating my breakfast when he arrived. We went to collect the other two and swung by the kit store to get the pull through rope and at 9.30am we left Sheffield and headed for the Peaks, already moaning about having to go caving.

As we turned left at the traffic lights near Ladybower a crushing realisation hit me that in my careful packing I’d left my wellies in my boot. However I was determined to look on the bright side – in between loud wails of ‘why me?’ – and I resolved to wear my converse with my wetsocks inside as they were getting a little tatty anyway. My levity about the lack of wellies was quickly smashed when I realised when we were getting changed that I actually brought only one wetsock and three kneepads as I had accidentally picked up the wrong pile. Jreg gallantly volunteered his newish walking boots as prussicking with one none-wetsocked converse sounded very painful but feeling sorry for Jreg, Mark offered his more battered trainers.

This had two issues; 1) I’m a size five and it felt like I was wearing flippers and 2) I couldn’t get the laces tight enough to create a seal around my ankle so my feet were rattling around like Miss Havisham in her mansion. But off we went and Jreg then said the immortal words of

‘At least we’ve got everything wrong before the trip started, we’ll be fine now!’

We headed towards the cave around 10am and down the passage with Jreg’s quick rigging at Garlands and all disappeared into the lower stream way. As the other three beetled off ahead of me and as I adopted my usual slow but consistent pace I discovered problem 3) the laces came untied periodically when my feet twisted in them.

We all reached the end of Giants with little faff and headed right towards East Canal. A quick bimble down there and we arrived at East Canal for around 11.10.

In East Canal I began trying to persuade the others to head towards the Filthy Five as I’ve been down their three times and never been. There was a lot of reluctance but I suggested that we at least go and look at the pitches even if we weren’t going to go up them. No one fancied the swim as we knew it would be very cold but Jreg was nominated to go first as he was in front and clinging to the wall like a limpet. This was glorious. Jreg was so determined not to avoid the water that he was trying to scale the wall around to the right which he almost managed but at the last second he misjudged a rock and fell in. What followed were the best high pitched noises and splashes that I have heard for a very long time and were hysterically funny. 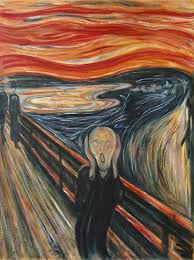 A visual representation of Jreg

Olly, I and Mark all opted for the ‘brave it in the water’ approach and quickly swum around to the bottom of the first rope and, with chattering teeth, began to ascend. At the top of this section I managed to lose my right shoe and bury it in the mud. I found it, put it on and headed up the next pitch. Now at the top of this I couldn’t remember which way we were supposed to go for the pitches at the junction so we followed the worn passage to the left with turns. This turned out to be the wrong way and a very muddy Olly and Jreg returned back down and we went off to the right.

Now here was the problem. The mud was very deep and very sticky and I genuinely lost a shoe. As in my shoe came off and I had no idea where it was buried in the mud. The passage that I had buried it in was a small passage in which all I needed to do was to pull myself up to my shoulder height and I’d be safely over the muddy-stupid-bog bit. Now this was easier said than done when with every movement my feet were burying deeper and deeper and as soon as I freed one foot, the other promptly sunk again without warning. There was a memorable moment when I was stuck with my left foot in the mud, along with my right knee in the mud and my head approaching sinking territory. 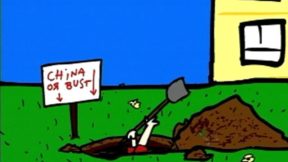 The feeling of looking for my shoe

This was hopeless. Eventually I demanded that because it was Jreg’s ‘Super Fun Happy Trip’ he had to offer himself up as sacrifice and I used him as a footstool to give me a leg up to the elusive next level (after standing on his face and neck liberally – sorry Jreg!). I resigned myself to the pleasure of the others to continuing and leaving the cave with only one shoe on. Behind me I heard Jreg and Olly scrambling to get up the section followed by a triumphant cry a few minutes later as Jreg miraculously unearthed the shoe and my kneepad which I had lost earlier.

We went to the end and had a look at the dive line. We had a chocolate break and decided that we didn’t fancy getting wet in a duck that we didn’t really know the length of. We headed out and went through the Giant’s Windpipe on the way back (cue Jreg squealing about cold water again – glorious!).

As it reached 2.30 I realised that we would never get out in time for call out if we all stayed together so we split into two; Jreg and Mark headed out and Olly and I were left to derig. We both descended down and pulled the side of the rope with the knot on. Nothing happened. ‘Ahh’ we thought ‘this is not good’. We tried both sides in case we were confused, we tried pulling on the rope with both of our body weights, we tried using crolls to prevent it from slipping back up but  we concluded there was a problem with the knot at the top and the way it was feeding through the krab.

The plan was then to prussick up the descended rope, retie the knot and descend down – et voila! However Olly and I, being morons, had lost track of which one was the one we descended and which was ‘the rope of death’. I was 95% sure that the right rope was the one with the knot in as I’d seen Jreg tie it before putting it through but I was unwilling to take that risk and we had already exceeded our initial call out and I had no idea when it had been extended until. So we tied it up out of the stream and abandoned it.