I’d been talking of attending the Irish Student Caving Forum for a while, and with an impromptu ferry purchase after the worlds kindest kick up the arse from Tony me, Molly, Liam, Michael and Botch actually found ourselves assembling at mine and Liam’s on the Tuesday morning; full of beans and ready to sit in […]

I’d been talking of attending the Irish Student Caving Forum for a while, and with an impromptu ferry purchase after the worlds kindest kick up the arse from Tony me, Molly, Liam, Michael and Botch actually found ourselves assembling at mine and Liam’s on the Tuesday morning; full of beans and ready to sit in a car for 7+ hours.

If anyone isn’t familiar with my car at this time of writing, she’s a silver Diesel Renault Megane with a ‘character mark’ on her rear left door and her name is Megan (as she will be referred to for the remainder of this report). This being said, it was rather ambitious to attempt to fit five people + belongings, gear and food into her but goddam it if we weren’t going to try. However, after a lot of cringe as I watched Megan’s suspension creaking ever lower we managed it and were all squeezed nice and snug into our respective spaces. And thus, clad in the party hats I’d sneakily bought for Liam’s birthday when we were buying food, the five SUSSonians relinquished all ties of fixed abode for a week and began our journey. 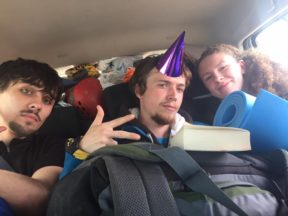 The drive over to Holyhead was pretty easy going as I recall. After Some quality tunes and only a quick stop to grab some necessities (ear plugs) on the way down we were cruising through the tunnels on the North Wales expressway (Liam decided to play a game to see if he could hold his breath going through the tunnel: no complaints there, kept him quite) and enjoying the sight of the sea, which is only too rare to a Midlander such as myself.

Being in a fairly banged up car laden with caving gear and sporting some dodgy party hats like something out of four lions we had expected some difficulty at the ferry port, so we were surprised when we simply sailed on through and plodded neatly into the belly of the ferry. It was at this point, finding a seat in the ferry café and then watching the coast slowly disappear from the window nearest to us, that the thought suddenly popped into my head: ‘Holy shit what am I doing why am I driving to Northern Ireland holy shit this is actually happening holy shit holy shit’, but I soon chilled out after some pizza and a windy trip up to the viewing deck and in no time we could see the coast of the Emerald Isle getting closer and closer.

We also learned on this leg of the trip of one of Michael Hollidays many fancies (more details to come hehe…), this particular one being random walkabouts. Mike just so happened to be on one of these walkabouts when the announcement came to set off back to the cars and whether it was the sound of his teen-angst music in his headphones of the wind howling around him as he stood gazing moodily across the outer deck like some yellow goateed Edward Cullen he evidently didn’t hear it and I slipped into full Dad mode having visons of when we lost Helen in Serbia. He eventually turned up though and after a brief ‘where were you me and botch were worried sick don’t you ever do that to us again of god we love you so much we were so worried’ we once again sardined into Megan and drove down the gangway onto Irish soil.

Speaking of soil, I then soiled myself several times driving though Dublin. Turns out the Republic of Ireland feels the need to skip the orange light on traffic lights and a heavily packed diesel ain’t the quickest thing off the line. This resulted in several beeps from raging taxi drivers and panicky pull offs (I’m fairly accustom to those at least).

The rest of the journey up through Southern Ireland was again uneventful as we watched the flat terrain begin to rise and fall more and more as we headed into the hilly county of Fermanagh.

The plan for this trip, by the way, was to go for a week and get in a few days of caving before the forum as we’d been well advised by several people that if we turned up straight away and tried to keep up with the Irish at drinking we were destined to never get down a cave. We were therefore staying at a caving hut a few miles away from the forum for the first few days: the mystical ‘Hoo’.

We arrived at the Hoo just as it was getting dark and after scraping Megan’s undercarriage several times on the lane (which of course, we had no idea was the right one) we fell out of here in a shower of gear and went to explore our home for the next three nights.

There are some things you need to know about the Hoo if you’ve never stayed there before:

As you can see the Hoo is a far cry from the cushty huts us pampered English cavers are used to but regardless we were stoked and excited to be staying there.

We also found on the table a mysterious note from the man I’d be talking to over Facebook; the Hoo superintendent ‘Sean the Miner’.  The note was simple: MIner was at the pub and we were welcome to join him when we arrived. Game on. We woofed down a quick tea on the Hoo’s gas stove and followed the cryptic map on the note to The Linnet Inn, also known as McKenzie’s or (seeming as it’s the only pub in the area) Boho pub.

You can probably picture the timid way five young students shuffle into a rural Irish pub, with every patron sat around the bar slowly turning to stare (this is a local pub, for local people). Eventually though, one of us squeaked the name ‘Sean’ and up stood the infamous miner himself, who made us all feel at home by generously buying a round.

Little did we know it, but we were actually set to do out very first cave in Ireland that night.

After a quick chin wag Sean asked us if we’d like to go caving. We said yes of course as it’d be a quality laugh but were surprised when he simply opened an ordinary looking side door like some twisted caving Willy Wonka and we stepped into the McKenzie’s pub cave. This place was of course not technically a cave, but an epic function room clad entirely in stone; the pub landlord later told us of the unbelievable effort his father went into making it by concreting the rocks together over a pile of sand then digging out the sand from inside the solid rock shell to form the cave, all in a day. Whilst you may say it’s not technically a cave, it is listed as one in the Cave of Fermanagh and Cavan book, so I’m bloody counting it. 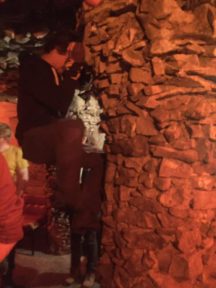 Botch navigating the Pillar of Death or Doom or Whatever

After chatting even more to Miner and having a crack at his challenge ‘The Pillar of Death’ (a traverse around a column inlayed with stones in the centre of the room) we decided to go to another cave and we followed Miner to Pollnagollum Coolarkin, a fun little roadside touristy cave famous for being featured in Game of Thrones, in which Miner has a wicked little dig.

And so after possibly startling some doggers outside the cave, we headed back and crashed at the Hoo after a very eventful start to the week. Needless to say we were very pleased with two caves and a pub session under the belt already!