There are many beautiful and wonderful trips in Derbyshire that have the potential to fill you with the undeniable pleasures of caving – the Assault Course is not one of these. The Assault Course is an exercise in misery and self loathing with a small burst of hope when you reach the end before you […]

There are many beautiful and wonderful trips in Derbyshire that have the potential to fill you with the undeniable pleasures of caving – the Assault Course is not one of these. The Assault Course is an exercise in misery and self loathing with a small burst of hope when you reach the end before you remember you have to go back the same way.

At the weekend I had a very drunken weekend and decided to organise the shit out of my life. This cultimated in me harrassing Leo into going down the Assault course via Peak on my random mid-week holiday day. Now drunk me was very organised and apparently managed to arrange Peak Access during the night. When I awoke I went downstairs, got my breakfast, drank a coffee, died a little inside and returned to bed with my hashbrowns and sausages tucked under my arm in a polystyrene tray like a small child with a teddy. I was awoken an hour later by Martyn who thrust keys under my nose and I was hit by the growing realisation that I was in danger of having to do the sport that I often avoid as much as possible – stupid caving is a stupid sport and I don’t know why I do it. But a promise is a promise so off I went to Tony to go get a new oversuit for my new foray into the stupid sport.

Bright and early I arrived at Leo’s (10am – 30 mins later than planned) and after lots of faff we arrived out at the TSG and we fully kitted out and heading towards Peak Cavern for 11.30. We made quick time through Peak, pausing only to let me take off my many many layers as I was hotter than a ginger in the midday sun in my undersuit. We rattled through Colostomy and reached the start of the Assault Course in just over an hour so around 12.30. Now until now it had been a pleasant trip with a lots of singing about widows pensions after WW2 and a wade in freezing cold water.

At the start of the AC we reassembled our SRT kits out of the tacklebags we had dragged through from Peak and set off through. Now wearing our kits was apparently a mistake however the last thing that either of us wanted was to be stuck in tight bit strung up a stupid bloody tacklebag. Unfortunately this meant that I left my Haribo and water behind at the start of the cave.

Anyway we set off and I thought to myself that’s this isn’t too bad really and then I heard a ‘oh dear’ from Leo in front and my heart sunk. Now I know that I am probably an exaggerated level of angry in this trip report but my misery on the trip was very real and very strong. The first section was clambering up over boulders that blocked the thin passageway and trying to worm your way over a ‘just body sized’ slit to fall out the other side when the boulder suddenly stopped. This section was quite fun as it was different to other stuff we had done and prompted the oft repeated question of the trip “How the Hell Did This Cave Form?”

Then there was the shimmying sideways bit that is very self explanatory. This then gave way to a flat out section near a dig in which a very patient Leo was waiting for me to catch up. There were some lovely mud formations in this small chamber – the formations had survived due to the lack of constant traffic through the cave and were small but dainty. The mud then stopped and we went left at the junction as we followed the water. The lack of mud is a problem as the cave isn’t worn due the lack of traffic as it’s a stupid bit of cave that goes basically nowhere. This means that everything you touch is scratchy and hurty and should be avoided – which is hard to do in the section that I affectionately named the ‘Scratchy Shit Horrible Bit’ which was basically from here to the end. There was lots of lying on your front, lying on your side, groaning about why does God like to punish cavers and slow but steady progress from myself through the seemingly endless passageway. Meanwhile I could hear Leo methodically beetling his way through the passageway like he was made of Teflon with occasional loud grunts of pain or excursion.

I caught up with Leo twice in the crawl/flat out thrutching exercise and he showed me the pretties that were very pristine including a very white tiny calcite waterfall. However, understandably, Leo beetled off again as he wanted to stay warm and keep making progress and I was left to wallow in the misery of my own making. I lost feeling in my right knee somewhere near the corner that I had to straddle balanced on one leg whilst crouched to get round and I didn’t recover feeling in it until I hit the cold water in Speedwell on our return. I became increasingly angry and impatient as my torment continued and I came to the conclusion that for the next week that I shouldn’t be allowed to organise what I’m going to have for breakfast let alone anything else.

Anyway after more flat out face down crawling, flat out crawling on your side and then having to lift yourself up to standing to get over something and then back down to crawling on your side and getting my helmet genuinely stuck when I went at the passage face on (what a fun moment) I eventually heard Leo’s much longed for call of ‘You’re almost here Nat’ and a short while later I emerged triumphant at final chamber. 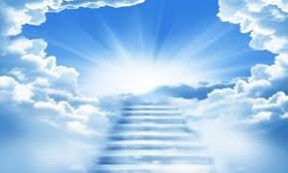 How A Grand Day Out Looked after the AC

A Grand Day Out was interesting (and surprisingly cold). The ropes have almost completely calcified especially the third pitch. After we went for a poke around at the top, we descended down. There was a point when I was sat on the third pitch with no breaking crab on forcing the rope through my descender with both hands and was descending no further than a gnat can throw a pigeon. At the bottom we ate Leo’s sweets and agreed that there was no way that we would ever want to be rescued from the AC as it would be almost impossible without blasting the entire way from Peak. A bit of chatter later we could no longer put off the inevitable and we steeled ourselves for the return. Now the return was interesting as whilst there was still a little bit of lying on our faces saying ‘why me?’ we (read – I) made more constant progress than the initial trip through. We theorised this was for four reasons:

We were very pleased to see the end and arrive in the Speedwell streamway at 4.27. The Bung seemed to have a lot of force behind it. We disappeared towards Egnaro Aven (after taking the wrong connection crawl initially) and into Colostomy. Now after the AC Colostomy seemed ever so roomy and pleasant; although I think that Colostomy gets nicer every time that you do it. We appeared back in Peak, I collected my undersuit and we headed off in search of Buxton Water to wash off.

The TSG was a welcome sight. After we finished changing the Moss Chamber trip turned up with Henry, Gamble, Sam and Elise who’s kind offer to join them was immediately refused by both of us. Creg then appeared fully dressed in the garage prompting much debate as to whether he had driven out in his kit which Leo and I used as an excuse to escape to the relative safety of Sheffield. Leo ordered a new harness before we’d even left Hope as he realised when he was washing his kit that he had managed to rip the main back strap of his harness and didn’t fancy doing SRT without a harness (funny that!).

The AC was genuinely a good trip and Leo and I agreed that it was a challenging and different trip that we were both very glad that we had done. Neither of us would rush back but given enough time and the right group we could be persuaded to venture there again. And to anyone who fancies doing the Assault Course after my miserable trip report – look at my bloody knees. I regretted my second bit of organising that I did at the weekend which was to go bouldering with Helen and others after I put all my weight on my knee on a hold – next time I’m in an organising mood tell me to shut up and have another beer. 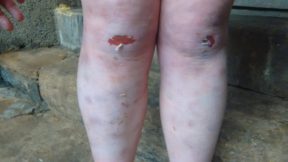 Update – my knees are now infected and weeping (lovely!) – but hey it meant I couldn’t pick up a shift this weekend so every silver cloud and all that.

I realise that I complained to almost anyone who would listen at the pub but stuff it. I started the report before the pub so I am going to publish it and there’s not a lot you can do about it.