Members present: Myself, Alan Bretnall (Guide), Molly Smith, Liam Overett, Michael Woodward, Michael Holliday. As this past weekend was our annual dinner weekend in the Peak District, I booked a visit for a couple of members to visit Water Icicle Closed Cavern near Monyash. We all awoke feeling a bit fresh and heavy headed, ate […]

As this past weekend was our annual dinner weekend in the Peak District, I booked a visit for a couple of members to visit Water Icicle Closed Cavern near Monyash.

We were all suited up in our suitable attire including some of the equipment that we had gained from winning the CHECC competition (many thanks are extended to Jane Allen who provided the equipment) and heading for the entrance. Liam rigged and we were soon descending down the mined entrance. It is a fairly nice slot that drops down until you enter the natural chamber that the miners broke into. 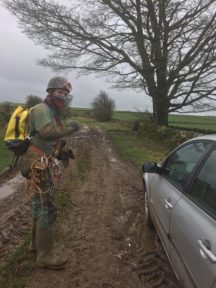 All geared up and on the way to the entrance. Tackle sack, buffs and some of the SRT kit provided by UKCaving. 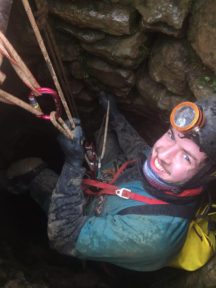 Descending down into Water Icicle Closed Cavern. The simple used was given by UKCaving.

Alan pointed out the way to the rift which eventually leads to the recent 2012 extensions that aren’t gated so we could go there after seeing the gated stuff. And then we heading through the low muddy passage into a nice phreatic passage with some pretty formations until we reached the base of the ladder up into the 2009 gated extensions.

A pretty easy climb up the ladder leads through the gate and into a boulder choke which is simple to navigate and then you arrive into the phreatic passage. There isn’t a great length to the cave but the formations really are spectacular. They are formations that I haven’t seen before and are extremely delicate. They almost appear to be evaporites that form from a pool enriched in calcite which evaporates, leaving behind the spiky crystalline formations.

We had a look at the elevator which does look a bit sketchy and learnt about a few stories from Alan before then proceeding. The passage splits in two, the left leading to cherty 2 passage however for now, our way on was ahead until we soon came to the end where there are is a dig ahead. It was at this point that Molly found some weird bugs. They were tiny and white and just floated on the surface of the water and responded to the environment. They would group together in circular clusters and if the light was shone on them or any noise, they would start jumping around. Very peculiar – name still to be decided.

We headed back the way we came, and I pointed out the sole reason I wanted to visit the cave – a rock sticking out of the wall. Simply because this is a rock that pre-existed prior to the formation of the limestone. It is theorised that it is a volcanic projectile that was from a volcanic eruption on the sea bed some 350 million years ago. Amazing enough that I bored everyone with its tale. But that was what was amazing about it, that single rock had a story behind it that gives us insight today into what the landscape was like back 350 mya.

We made our way to cherty 2 passage and Alan explained the reason behind the name of the passage (there is chert in the passage that looks like a number 2 – later found by Molly). There was also another interesting tale about broken stalactites in the passage. Stalactites to Miner’s were known as Water Icicles, which is how the cave got its name. It is known that the miners hadn’t got into the passages beyond the gated area because of the boulder choke, however here there were stalactites that had been broken (broken material scattered around) but not by miners. The theory behind this is that tectonic activity in the region caused the stalactites to break. Nothing too dramatic like an earthquake, but a minor tremor or movement is all that is required.

We went on to a traverse which was a bit sketchy so approach with caution and once all off, we went on to the end of the passage. There were two digs at the end and we managed to get some squeezy caving fit into the trip (whoop). But now was time to head back to the chamber and check out the 2012 extensions that aren’t gated.

This was very quick and not quite as impressive as the previous stuff beyond the gated section, but the phreatic passage did appear to be much larger than the previous passage, which was an interesting observation. We were soon back at the pitch head and I started making my way up the rope painfully hitting my shoulder whilst prussicking up. I was dressed an in the car before the next person arrived and we were then soon heading to Buxton for some snacks and drinks!

Many thanks are extended from myself and the rest of SUSS for all the equipment that was donated by UkCaving. The club has really benefitted already, be it keeping warm underground with our Buffs, replacing old and worn out tackle sacks and having new SRT kits. The club this year has taken on a large number of freshers, so it has all gone to good use and helped the club out greatly so thank you very very much!