A lot of people were initially keen to help me in my endeavour to clean up Nettle Pot – at one point we had about 8-10 people wanting to come and assist, the trip soon suffered the usual drop-outs and Tuesday evening saw five cave conservation conscious cavers in a couple of cars creep up […]

A lot of people were initially keen to help me in my endeavour to clean up Nettle Pot – at one point we had about 8-10 people wanting to come and assist, the trip soon suffered the usual drop-outs and Tuesday evening saw five cave conservation conscious cavers in a couple of cars creep up Winnats Pass to go a short way into a cave and pull crap back out.

I was rigging, with Leo hot on my heels. We soon reached the bottom and were on the Flats, this was as far as we needed to go; on a previous trip just a week or so ago I’d spotted a heap of discarded wood and metal cable down a couple of the pots along the Flats, given its proximity to the surface I thought it was ripe for retrieving. Leo and I climbed down the pot and started sorting through all the rubbish. There was a lot of rotten wooden stopes, some iron bars, old shoes, plastic bits, items of clothing, carbide packs, an old battery pack and some bones. I crawled to the very bottom of the sloping floor of the pot, disturbing some large rocks on the way. The rocks tumbled down to the bottom of the slope and through a body-sized slot, I heard them crash and crumble as they fell what must have been 20 metres or so. I became acutely aware that we were actually stood on a chocked pile of stones topped with discarded rock rubble, from then on we were careful not to disturb too many rocks or unearth large bits of potentially load-bearing wood. We quickly filled up the three tackle bags we’d brought to carry all the gubbins out, so we re-purposed the other two bags for rope and decided to de-rig sackless. The three big bags were hauled out of the pot by Helen and Stephen while Michael cleaned up the last few scraps, in order to fit a steel bucket into the tackle sacks efficiently, Leo and Michael spent some time bashing it flat with a big rock which worked surprisingly well!

With the main pot done we split up searching for more stuff, I went elsewhere in the Flats while Helen went down to check the top of Elizabeth Shaft. Along the Flats there were some more bits of wood and a Lucozade bottle, I spotted another pot with a few bits of rubbish in the bottom – this time the pot was not free-climbable. I asked for the 15m rope we’d used for hauling the bags out of the smaller pot and quickly rigged on some dodgy looking stalagmites. With Stephen checking my anchors didn’t come loose I lowered myself down the pot and gathered the rib bones, peanut cans and battery parts that were scattered on the floor. We filled another bag and I set off prussiking out of the pot, carry two long pieces of wood too large for the tackle sack. Prussiking one-handed, cradling two big bits of wood, and trying not to shock a dodgy anchor is quite an interesting undertaking. I made it to the top somehow and offloaded the wood to Stephen who shoved it down the sides of an already very full sack. I de-rigged the monstrous natural rigging and headed back to the entrance shaft.

Helen had found nothing at the top of Elizabeth and so it was time to organise hauling 4 huge bags and couple of large bits of iron with slings poked through various holes, out of the tight Nettle entrance shaft. Leo went first, up to the Sentry Box – a reasonable ledge from which the final pitch down the entrance is rigged, he hauled up each bag in turn and stacked them beside him. Helen and Stephen ascended next, leapfrogging Leo and setting up another haul system at the top, while Michael prussiked up past Leo. Michael was stationed at the narrowest re-belay between Leo and the top so he could jockey the tackle sacks through. Once I’d prussiked up to Leo it was becoming clear to the haulers that the first bag was getting pretty stuck elsewhere, Leo went up to the choke point to be a second jockey while I waited in the Sentry Box with all the bags.

All prepared in our appropriate stations we were ready to haul! I clipped the bags and iron girders into the rope, Leo and Michael guided them through The Narrows, Helen and Stephen hauled and lifted them off at the top. We were operating like a well-oiled machine, and whilst we started getting cold towards the end we were done sooner we knew it. I followed Leo and Michael out, de-rigging as I went, which proved irritating as I had no tackle bag for the 70m rope I was pulling up after me. I popped out of the entrance to see the others divvying out the heavy bags, deciding who should carry which on the way back. I had the rope, which I chose to keep in the several little bundles I had coiled it as while I de-rigged instead of re-racking it. A decision I came to regret on the way down as my poor coils came undone and I tripped all over the place but I stubbornly carried the rope in a great bundle as I wandered back to the car – as Helen so festively put it: “Deck the Jack with Nettle’s Rigging – Fa-la-la-la-laaa la-la-la-la”

After a quick snap of our haul for UKCaving’s Conservation Reward we drank Green Tea (courtesy of Stephen) and incredibly sugary beige-coloured tea (courtesy of Leo) and headed home. 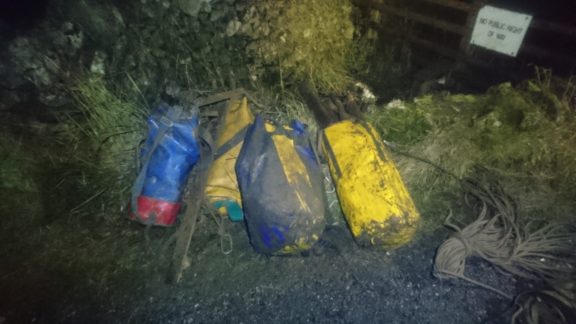 Four tackle sacks plus a couple of chunks of iron