This was my first trip on my first Wales weekend and yes, like almost everything in Welsh it is impossible to say. However I was to find out that Pwll Dwfn is not a typical Welsh cave. After the hectic trip organising in the morning I found myself on a trip with Jack, Rachael and […]

This was my first trip on my first Wales weekend and yes, like almost everything in Welsh it is impossible to say. However I was to find out that Pwll Dwfn is not a typical Welsh cave.

After the hectic trip organising in the morning I found myself on a trip with Jack, Rachael and Tom, three cavers rather more experienced than me. This suggested a more interesting trip though, which is just what I wanted. This trip was also had a fair bit of SRT, probably the only cave in Wales with SRT. We got all the kit sorted, which was a bit more of a faff than usual as no one had done this cave before so rope lengths weren’t known exactly. Soon Pedro was loaded and we set off to Pwll Dwfn. 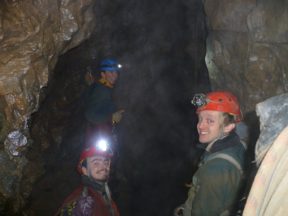 Jack, Tom and I at the last pitch

Despite getting a bit lost on the road and then having trouble finding the cave using a description from a guide, we managed to find the entrance. Tom found bolts right at the entrance so rigged them and slithered down into the cave. I went down after Jack and spent a while making sure I was on the rope, only to find the drop was only a metre or two and the rope wasn’t needed! But after a short passage the cave opened up into a rather impressive, large shaft, and I was at the first pitch. This was a straightforward abseil, which is always fun. At the bottom the second pitch started almost straight away.

The second pitch had a short and quite awkward rebelay at the start, but I got past this without too much of a struggle and carried on to the bottom of the shaft. After getting a chill from a mini waterfall, I met Jack just before the tight passage that led to the third pitch. We negotiated the traverse to the pitch, which Jack flew over but took me a little longer due to the lack of obvious footholds. I then waited for Jack to make the descent and as he got to the bottom I saw, and heard, him swinging into the next passage, which was very entertaining for Racheal and I.

I then made the descent, past a deviation, and swung into the passage. Throughout the trip we had noticed in-situ rope, which was going all over the place, but we weren’t going to use any as not only might the rope be bad but the bolts were very homemade looking and rusty. But this was about to change. On the fourth descent, after another deviation, Tom ran out of rope, and so had everyone else. So using a sling he made a rebelay into some in-situ rope. Luckily the bolts for this rope looked more substantial but Jack told me to be smooth and quick, just in case.

At the bottom of this pitch, after squeezing under a boulder (which Rachael decided to go over, and regretted), there was a nice little chamber for us to enjoy some midget gems, which were much more enjoyable at that depth. We had a look down the fifth pitch, and could clearly see the bottom and what looked like some digging or diving gear, but we had no rope and even if we had wanted to risk in-situ rope, that only went halfway.

Rachael got a snap of Jack, Tom and I at the top of the fifth pitch then we headed up with Jack derigging. Prusiking up the four pitches was hot and got tiring towards the end, especially when trying to keep up with Tom. But about 2 and a half hours after going down, I was out the cave again, this time free climbing the entrance drop.

Tom was lounging in the sun when I got out, which made us almost forget we were in Wales. We spotted some horses and tried to get one as a pack horse until Rachael and Jack got out. After that failed we headed down, Jack telling me how finding that cave was good practice for expeditions.

We got down to Pedro, got changed, thanked the dinosaurs of Dan yr Ogof for guarding him and headed back to the SWCC hut.

So overall a quick, fun trip into a Yorkshire SRT cave hidden in the valleys of Wales.