In a trip which featured more piss and fag smoke than a night in the Cobden we made a substantial amount of progress on our various exploratory efforts in P8. On the way to the cave Leo demanded we stop in Castleton so he could use the TSG toilet – a massive gamble as he didn’t know […]

In a trip which featured more piss and fag smoke than a night in the Cobden we made a substantial amount of progress on our various exploratory efforts in P8.

On the way to the cave Leo demanded we stop in Castleton so he could use the TSG toilet – a massive gamble as he didn’t know the code for the inner door. Luckily he bumped into Martyn Grayson leaving the Chapel, he graciously opened up the pearly gates to allow Leo access the porcelain thrones contained within. We had a little chat with Martyn, explaining our plan for the evening – he said that the lower face in Ben’s Dig is well worth a go and (even though I said the same thing when he suggested it two years ago) I’m certainly up for taking on the task.

We arrived at the P8 car park at the same time as Henry in his wee Micra. We all got changed while Ash (who we were carrying dive gear for) had 3 or 4 cigarettes to line his alveoli for the dive ahead. Henry, whose main aim was to hinder our efforts this evening at any cost to himself, had forgotten his SRT kit. Tommy offered him his “ultra lightweight” kit but Henry kindly refused and opted for a single sling and krab harness, with a pair of Ash’s cowstails which had knots too sketchy even for Henry, who retied them and set off.

We got down to the bottom with no incidents, Ash had shot off ahead and I found him finishing off yet another cigarette by the sump. Henry took the chance to take a piss in the sump right before Ash set off in the dive, we left him to it and headed back to get into Ben’s Dig.

We arrived at the end of the dig and Henry agreed that the actual dig was worth a punt – and that the master plan drawn up by Grayson was a very good idea, we aim to put it into action soon (probably on Sunday).

I took one end of the rope I planned to rig and headed up the dodgy handline. Bridging myself at the top I hauled the drilling/bolting kit up after me and began to place two bolts for the Y-hang. After some faffing around with the 3 in-situ ropes on the handline getting tangled with my own ropes I had the bolts placed and the rope rigged. Henry, Tommy and Ash (who had finished his brief dive and joined us) followed me up and took refuge in a small solution chamber adjacent to the newly-bolted pitch head. I continued up a red 8mm rope which was rigged as a pitch up a very chossy slope for about 5m. The bolt it was on looked rusted but safe, however the rope was rigged straight through the rusted hangar plate and looks ready to cut through. To play it safe (and get some more bolting training in) I placed another bolt and rigged another pitch leading down to the first.

The tube I had ascended up had broken into the bottom of a rift filled with silt and boulders, the silt had collapsed through into the tube below to allow access. From the limited angle you can see there is at least 5-10m more of achievable ascent, though it is in a rift that is occasionally too narrow to drill. The silt platform beside where you break into the rift (presumably where the bottom of the rift was before it collapsed down) is smooth and covered with small pebbles indicating that it is undisturbed – as the only way on requires you to step on this undisturbed patch, and there is no flow of water to have deposited the pebbles recently, it’s quite clear that the top of this pitch is the furthest anyone has got with this lead.

I call Tommy up to get a second opinion on the prospects, he agreed to give it a go and began to hand bolt the rift while I went back down for a break. I found Leo in tears as he had got some of the fallen grit in his eye, Nat was unsympathetically laughing at the situation – as usual. I heard the sounds of Tommy placing more bolts, until Ash told him to stop while he came down the pitch to join us. He soon decided that he was bored and left to go have a fag and a pint at the Wanted Inn, leaving behind a smell of piss that could either have been Henry’s from the sump, or Ash’s from within the wetsuit. I heard Tommy finish placing a bolt before Henry came down to join us, we solved the piss-mystery when Henry told us that Ash had urinated in his own wetsuit shortly before leaving Henry up in the small chamber; “We were just laid down in the chamber talking and suddenly it smelled of piss” Henry said.

Soon after, at about 22:30, Tommy decided he was done (we had already decided we were done about 30 minutes prior) and came down. He said he had made it about 2m higher up and could see that there was definitely a way on, however you had to collapse numerous rocks in order to gain height, which he admitted was a bit sketchy.

We decided to leave in time for last orders at the Wanted, and headed out. As we got closer to the streamway we could smell more cigarette smoke, Ash had clearly been too keen to get his next fix and sparked up before leaving Ben’s Dig. I was hurrying back out, keen to get to the pub, but I got stopped in my tracks by a shrill cry of “Jaaaaack! Liiiiight!” by Natalie. I called to Tommy to ask for his spare light and he obliged, Leo and I carried on out while Tommy sorted out Nat’s light.

We were out in good time and at the Wanted for a pint and a pork pie.

Good amount of progress made and bolting experience had. Here is a terrible diagram (Not-to-scale – bottom pitch is 7m, top pitch is 5m): 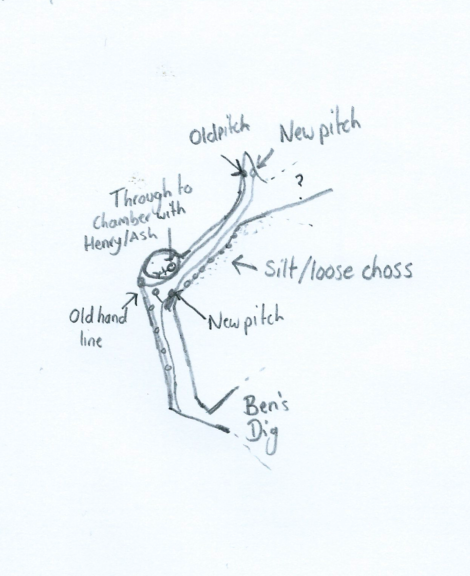 I’m returning on Sunday to re-start Ben’s Dig, and begin to remove some of the old digging tat he has left in there – hopefully we can get some kit for the club from the cave conservation amnesty!