N.CHECC Weekend 18th-20th March 2016 After over-egging it with the alcohol on the Friday night I was very pleased to wake up and realise that I was spending the day with CRO doing rescue stuff. The saving grace was that we were up before Creg wandered around doing the usual wake up call using two […]

N.CHECC Weekend 18th-20th March 2016
After over-egging it with the alcohol on the Friday night I was very pleased to wake up and realise that I was spending the day with CRO doing rescue stuff. The saving grace was that we were up before Creg wandered around doing the usual wake up call using two pans. We eventually all ate and piled into two tiny cars with Botch loudly reading the caving for children book in the back of Pedro to increasing shouts of ‘Louder!’ from Liam, Jreg and I which I’m sure Jethro was very thankful for. Mark, Rihanna (NUCC), Stephanie (MUSC) and Creg were in Peachey’s.
.
At CRO we spent the morning drinking tea, going through first aids and recounting some memorable rescues and later wandering down to the garage to check the equipment and see how everything was set up. I may have embarrassed myself by questioning the usefulness of a short ladder for Mark to point out that it was obviously extendable.
.
The day was cut short when they were called out on a rescue for a climber at lunchtime so Rihanna, Liam, Mark and I went to play in the stream and attempted to skim stones with varying success. At Bullpot, Creg gave Stephanie, Jacob, Rihanna and the others a lesson in croll-to-croll rescue and z-riggs in a tree. The rest of us helped Botch by encouraging him to practise his knots using the bottom of the rope that Creg was prussiking up using the ‘he can practise knot passes’ excuse. We got bored of this eventually so we all filed into the climbable section at the top of Bullpot OTW, decided we’d been caving for the day and wandered off across the moor. After seeing if we could all fit in the lime kiln, we decided to take a picture on the top of the hill which developed into a fun game of using ‘Vista’ as a trigger work for everyone to attempt to tackle me. We returned to the hut and amused ourselves before tea by constructing handcuffs from the spare rope to control Creg and then Jethro. 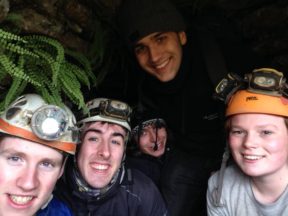 On the Sunday, Molly, Leo, Brendan (ULSA), Mark, Liam and I wandered off towards Pippikin after we were eventually all ready, assembled and had set a call out. We’d decided after hearing about Helen and Rosanna’s trip from hell down there a few weeks ago that we would take our SRT kit’s off for every squeeze which went really well as I nearly dropped my SRT kit down a massive hole in the floor near the beginning, as it began sliding down the squeeze without me, giving me and Brendan a mini-heart attack. Crisis averted, we made our way through the cave. Because of the restrictive and linear nature of the cave I didn’t really see people towards the front like Molly at the beginning of the cave and all I could hear were disembodied voices which seemed to alternate between swearing or singing ‘wrecking ball’ by Miley Cyrus with far more enthusiasm that strictly necessary. It’s really cool on the way in with lots of little different sections that mean you’ve got to actually pay attention at all times (not always my strong suit) but I can imagine it’s not so fun if you were going back up it as the cave is essentially pitch, SRT off, squeeze, SRT on, pitch and repeat on a slight downward slant.
.
We all slid through the various sections with the only major issues being that I overestimated my velocity coming out of a squeeze as I assumed it was smaller than it was and whilst using Liam a balancing stick fell out of the squeeze and landed on him from about a metre up. I had enough velocity to do a half turn, closed my eyes and braced myself as the large rocks whacked me on the back. Liam and Mark treated this with the usual decorum and laughed (bastards) and we set off again.  I got my own back later as whilst trying to climb over a squeezy rocky bit I stood on Liam’s shoulder which I assumed he’d move once it wasn’t needed anymore. Unfortunately this wasn’t the case and what he eventually did have was an entire me perched on his shoulder in a free climb like a demented parrot. This didn’t appear to impress him. At the bottom we hit a streamway so we knew we were almost at Mistral. I rediscovered my dislike of crab walks which was a lovely middle section of the trip but it wasn’t that bad and eventually we were at the end and into a pretty section full of straws, stalagmites and the like.
.
We had a quick look in Mud Hall which was ridiculously full of clay-ey oozy mud and then headed for the exit. I’ve never been in Mistral and I’ve always meant to go and have a look around so I quite enjoyed the short bimble out. The entire trip was really short at three hours and we had time to sunbathe after on the moor on the walk back. Unusually for me I really enjoyed a trip, so did everyone else (apparently) so no-one had to suffer for my happiness!