Long Churns to Alum Pot 18.10.14 After the heavens had opened for the entire week, things were looking worrying concerning our trip to Long Churns Cave when reports came through of the water depths in the area. One minute we were going, the next we weren’t and were organising another cave to check out, and […]

After the heavens had opened for the entire week, things were looking worrying concerning our trip to Long Churns Cave when reports came through of the water depths in the area. One minute we were going, the next we weren’t and were organising another cave to check out, and then when that had been decided, plans changed again and we were to go and check the cave out before making decisions. We got into our groups, threw our stuff in the back of the car and off we went. 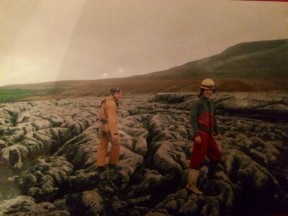 A very vintage-looking photograph from 2014 of myself (Samuel Snowdon) and Tom Smith on our way to Long Churns.

When we arrived and parked up at Selside, around 9 miles from Ingleton, we all got dressed up into our ‘dry’ caving gear. On our walk up the track towards the entrance of long churns, things weren’t looking promising. We were greeted by a large pool of water covering the track that had formed by water seeping up from beneath the ground and streams running off the hills looked pretty swollen but still we continued. We reached the entrance of Alum Pot and looked down into the 60m abyss with no sense of where the bottom was (didn’t want to lean over too far in fear of falling over the edge). Carrying on further, we clambered across a limestone pavement from which we could see a tree (couldn’t say which species) that marked our entrance to Upper Long Churns.

The stream appeared to be a raging torrent upon first glance, but once you were in the water, it ‘seemed’ quite a weak flow. So the decision had been made and we began our adventure into the darkness of the Earth. The torches came on and we could already see the beautiful formations the flow of water blesses us with. Looking much closer at the rock formations, you gained an insight into the rich and ancient past of the area, with the limestone being dominated by Crinoid stems and Corals which certainly drew the attention of my eye throughout the caving experience! A homely spider greeted us with its presence at the top of the plunge down into “Dr. Bannister’s Hand basin”, a rather large spider that people weren’t fond of as it was directly above our heads.
We all took it in turns to be belayed down the plunge which took a lot of time as there were 7 of us in total. We didn’t have the correct number of harnesses as well, with one of us even carrying around just a belt which served us no purpose so we were taking harnesses of and sending them back up the waterfall to Gamble. Going down the waterfall we realised the true force behind the water, like being constantly rugby tackled by a Tank, and also realised it was a very good way to wake up.

Dr. Bannisters Hand Basin was a moderately sized pool and a very good way to get your body’s temperature adjusted to the cold water as parts went up to the chest, and even higher if you slipped down one of the sudden steps. The water swirled around the pool in an anticlockwise fashion before being drawn down the main stream-way into Upper Long Churns.

Following the main stream way you could see the calcite deposits coating the walls and looking up at the ceiling there were several stalactites that took the form of women’s breasts with nipples included! We also found some really small calcite terraces along the wall which were fantastic to see. Sian was mesmerised by the droplets of water that had percolated through the limestone rock layer above us and settled on the roof of the cave to shimmer like diamonds when the light of the torch hit them. This was noted many times along the journey.
After sometime meandering down the main stream way, we came across an outlet to our left that led us to the outside world. Here we shared out chocolate and midget gems, had a good chat and got a sense of place in accordance to the entrance and Alum Pot (we were just under half way and to the right of the limestone pavement looking up towards Ingleborough (Big hilly thingy)). We also got a view of Diccan Pot as well, one cave I need to go down.

Going back underground, we came across our amazingly named ‘vole hole’ where a little voleas seen scuttling about the rocks. We could see where we had come from and rather than going right, we went left and followed the mainstream way down. Here we came across a waterfall. It was around 4m in height which we diverted around by a passage to the left of the waterfall. At the bottom of the falls we carried on and just outside of that waterfall chamber was a passage to the right but we carried on further down. Now comes the fun bit, we came across a 2m slope down into a pool, some decided to climb down and bypass the pool but others slid down the slide and into the pool which submerged us beneath the water coming as a shock to the system as cold water floods back into our suits, but fun none the less. Alas, the cheese press was upon us, Tom led the way through the tightest squeeze in the Yorkshire Dales and I loved it (I have gained a fond loving for squeezes). There was a side passage around to the right of the cheese press for those that weren’t up for it.

We came across our second pitch, which was 20m in height and us being freshers had to be belayed down by a very kind Gamble. This took around 30 minutes to complete, again for the reason of how many of us there were and having to take harnesses off and send them back up. Whilst this was happening, Tom had set up a ladder for us to get back up on.The entire bedding plane down at the bottom was covered in Brachiopoda shells fossilised within and were again really fascinating to see. We reached the exit of Lower Long Churns where we had a view of the entirety of Alum Pot which was an amazing sight to see. Because of the recent rainfall, the waterfall was cascading over the top and was becoming a spray as it reached the bottom. One of us (not naming and shaming) lost their footing and fell, scaring a couple of members of the team for a slight moment before getting up and brushing it off.

Once we were all down, it was time to get back up so Tom led the way by prusiking up the 20m pitch and securing himself in at the top so he could help us up the ladder. The ladder was a difficult task to say this was my first trip with SUSS but on the way my torch lightened up an entire corallite (coral) fossil and it was amazing studying some of the morphological features. This spurred me on in a brief moment of excitement. I think the last 5 metres were the hardest part, but I made it to the top and got out of the way for the next people to make their ascent, one at a time. To kill the time I took a drink and quick shower under the water droplets that had percolated through the overlying limestone which was probably the purest water you could taste. We then made our way back up the stream-waystream-way and up through the cheese press again (yay!), I was first through so I guided the rest if the crew first. There were some amazing noises coming out of that press. A but further on, me and Sian came across a side passage to our left so we went through to investigate. We found out that it went directly next to the waterfall (4m) chamber so you could hear the waterfall crashing into it’s plunge pool leaving behind a resonating sound in the tunnel we were in. We decided to head back to the main stream-way and carry on up, where we was shown our way out. It was around a 10m crawl through a stream-way which was around 1m in height. I loved it and jumped straight down (I have an obsession with water) into it and just pulled myself through into the warm, fresh countryside. We were all cold but it was overall a fantastic trip, there was just the right amount of water to have fun and there was a great atmosphere with great people so a fantastic time was had.