Firstly my apologies for the somewhat delayed trip report I’ve been meaning to write it for a while and just never quite getting round to it. I probably should also say sorry for what I’m assuming will be the length and poor quality of this report in comparison to the tales of Mark, Jack or Rostam. […]

Firstly my apologies for the somewhat delayed trip report I’ve been meaning to write it for a while and just never quite getting round to it. I probably should also say sorry for what I’m assuming will be the length and poor quality of this report in comparison to the tales of Mark, Jack or Rostam.

The trip was suggested over email, upon reading this I was slightly dismayed, whilst I try to take any opportunity I can to go down titan the place never fails to impress me and I did enjoy the digging trips I’ve done before (for those who feel like a challenge I strongly recommend something like this )

The morning after, it was morning after a corp night out though I had tried to keep drunkenness to a minimum though when a friend who I knew I wouldn’t be seeing for several months invited me out I couldn’t refuse. Feeling groggy and regretting either my decision to go caving or my decision to go drinking still not sure on which one, I ran around going to the asda to get some cave snacks and packing up, 9oclock Henry arrived.

Driving through hope we had to pull in to get a drill at this point I found my somewhat rushed packing had led to me forgetting wet socks not feeling too great about this especially knowing that others would be going in wetsuits Yay cold wet trip.

A top of titan, reaching the entrance in reasonable time Henry Rob Glen and myself hopped down the entrance shaft just as Cambridge were arriving. At the bottom of the entrance stooped round to the right avoiding the puddle like the plague not too keen to get my feet wet straight away waiting for a minute or two “Rope Free” echoed up from the depths below Rob then disappeared from the window down the rope at some pace, yelling something this slips my mind now but it made me chuckle at the time. Going down titan on a stop soon teaches you to go quicker the first couple of times my hand felt achy now it’s quite an enjoyable experience wizzzing downward toward the event horizon trying to judge the best time to slow down as not to bounce too much on the stretchy rope.

Once at the bottom headed off to cliff cavern meandering along to the JH connection though not nearly as bad as I remember it, this could be due to my standards slipping. From here a somewhat pleasant orange smell drifted up on the draft as we went to the speedwell stream way, my drink had opened in a bag, not much was lost though and after that puddle I was glad for the smell. Going up the streamway I had oh so cold feet, nothing quite as ‘refreshing’ as walking in a stream with no wet socks almost makes me pity freshers without them, almost.

After getting out of the stream we went along a bit of passage decorated with graffiti of people there before us some rather old an impressive site all be it small and manmade I was surprised it had lasted. We got to the bottom of Cliff Cavern, a tall pitch quite wide, towered above. For some reason at this point I decided not to / forgot to put my pantin on, the first bit was fine, though I would highly recommend one for what followed. Tyrolean having not really come across this before I wasn’t really sure as the best way to do it. Although I had been told that laying on your back worked my footloop was tangling or sliping over my heel and I couldn’t get the rope to feed through my croll so I tried various styles non were really effective.

The various techniques of trying to do a tyrolean, yes I know very productive day at work. 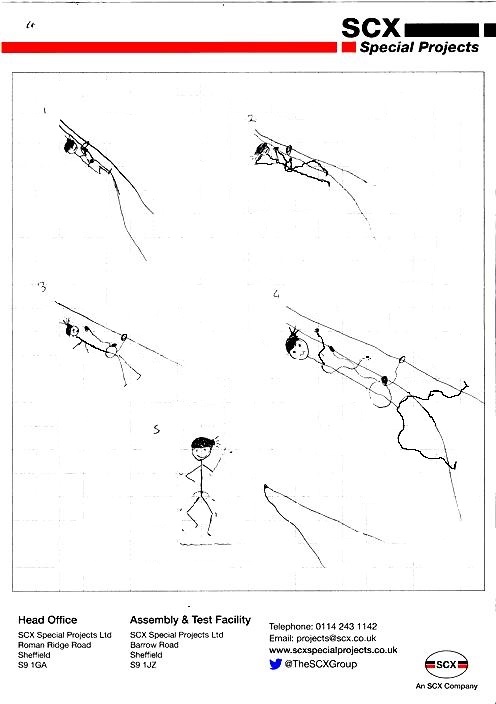 Once at the top there was a small very dodgy looking pitch to get to the dig area this was replaced by rob with a rope protector added, we carried on it opened out into a bigish chamber on the opposite side a passage to the sump. Once here I de-kitted and the siphon was in full flow so I went up to the sump and have a look round while the siphon did its job. shortly after the siphon emptied the sump (sucking up rocks at the end this turned out to be a major issue later), Henry and Rob disappeared though not to be seen for a while. After some time the sump had filled up and the siphon needed starting again, difficulty was every now and again a pebble would enter the valve rendering it useless though we (mainly Glen) got the siphon going again it was about this time the people with the wires and I think the dets for the explosives came sorry I cant remember your names my memory got a little fuzzy after the top of Cliff Cavern. Rob and Henry came back through there was a small discussion about what was to be done then we set back to it. Henry and Rob set off back though the sump we waited, we tried to get the siphon working again however there were issues, issues we could not figure out it was difficult to start rocks shouldn’t have been getting in we stopped it last time in plenty of time. We kept trying with no luck some rocks had now been pulled in from our failed attempts and it seemed harder to move the handle, the inner tube seals had started to go and kept needing re-tying or holding in place. It had been a wile now I cant think what the others were thinking, our energy levels were dropping and other than little things like the seals and the valve which shouldn’t have been a problem we couldn’t figure it out. Finally, we thought to check the pipe head and sure it was buried I went into the sump as far as I could fishing round to lift the tube out of the mud after this there was little trouble and great relief filled me as sump emptied and the torrent of water roared through the siphon.

Everyone back on the correct side of the sump we packed up and got ready to set it off, images of thunderous explosions Indiana Jones styled escapes ran through my mind, of course this wasn’t going to happen we were at a pretty safe distance although I was expecting noise and lots of it. Fingers in ears I waited…                         Pop oh well that was disappointing the sump had closed almost silencing the explosion. With this we decided to go out with a pop.

The way out was reasonable uneventful I noticed a few spider webs or spider web like things at the bottom of the pipe from JH going to the speedwell streamway and wondered how they got down so far I presume they were washed in. Also in a moment of frustration I can only assume Glen misunderstood what was meant by going through a cave and appeared to try and force himself through the rocks making the titan bolder choke breaking the neck off his metal bottle which only led to more dismay. All in all I think the trip was around the 11 or 12 hour mark, forgotten the actual value, a tiring trip but in a good way.