Boy am I glad Tom pretty much forced us to cave with other clubs at Northern CHECC – my time down Aquamole was quite a varied experience but I always end up enjoying the ‘varied’ trips anyway. Northern CHECC was a very good weekend. It had everything you would expect from an excellent caving weekend: […]

Boy am I glad Tom pretty much forced us to cave with other clubs at Northern CHECC – my time down Aquamole was quite a varied experience but I always end up enjoying the ‘varied’ trips anyway.

Northern CHECC was a very good weekend. It had everything you would expect from an excellent caving weekend: 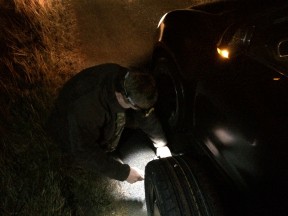 He knows what he’s doing, let’s leave him to it 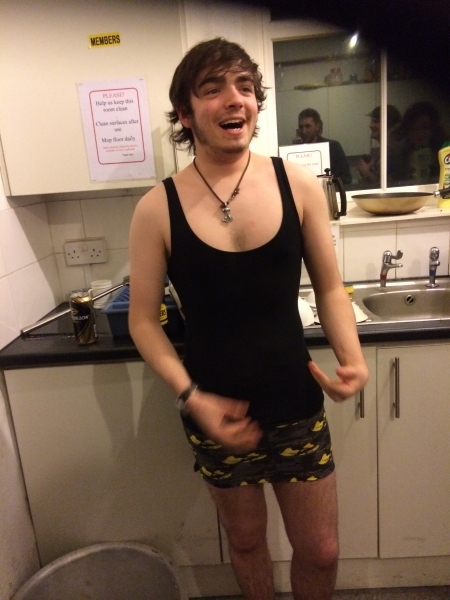 So, without further ado let us begin this tale.

I chose to go down Aquamole mainly because of the fact that it was a rigging training trip and rigging is something that I needed to learn. Jack Slinger and I both chose to join Cat, who would be leading the trip. Zara and Theresa also joined it, as they were also interested in learning the fine art of tying ropes to bits of metal underground.

After packing all of our stuff up, we set off to Aquamole. We may have got lost and looped-the-loop in Ingleton a couple of times but we finally made it to the lay-by, we kitted up and set off on a walk up the steep slopes of the valley hunting for the entrance. All we had been told was that it was through a fence at the top, and 10m off the path on an incline so it was hard to see. We passed the aforementioned fence and spread out searching for the cave, I found a few dolines but nothing useful. In the distance we heard Cat yell over the wind, she’d found it! Quick as a flash she ran down to the metal covering and heaved it open. We arranged ourselves in order of who would be rigging which pitch. Slinger got the 80m pitch, I lucked out with the 20m pitch and Zara got the final big 60m pitch.

After a few minutes of dilly-dallying we finally got all of us into the cave. Up at the front I could hear Slinger rigging, and Cat correcting him. As I descended down the various re-belays of the long pitch I didn’t look forward to ascending them at the end. The pitch was just tight enough that you couldn’t quite get comfortable. I reached the bottom and waited for the whole party to gather before heading off. This time it was my turn to rig the next pitch so I set off ahead with the tackle bag. The passage to the next pitch was tight, some parts were hand-over-hand crawls in the dank floor with my tackle bag trailing on my Donkey’s Dick, Cat had to repeatedly dislodge it from various nooks and crannies on which it got trapped. There were a couple of parts too thin to crawl that we had to stand up and breathe out to pass through, with Cat hammering my tackle through the tight bits. I burst out of a particularly short squeeze and onto the top of the pitch. The rigging set up was fairly simple; a Y-hang at the top with a Re-belay 3m down and the guide said there was a deviation  as well which we couldn’t find. I managed the Y-hang easily enough but the Re-belay raised some issues. I had tied a fig-8 into the bolt and had my descender on the rope below. I was just taking off my short cow’s tail when the hand supporting my weight slipped and I dropped down a foot or so, by some unfathomable chance the krab on my cow’s tail had clipped into the very centre of the fig-8 I had tied. My weight was fully on it, forcing the krab even further into the knot and simultaneously tightening the knot around it. “uhhh…” I said, Cat peered down and saw what had happened, “how the hell did that happen!?” she asked, I said I didn’t know!

I sat for a few seconds thinking on how to fix this pickle. I decided to dismantle my Magnum Opus of a Re-belay so I could unclip. I got my Croll onto the top rope and shunted up a bit to take my weight off the anchor and took it apart, my second attempt to build the Re-belay was far better and I reached the bottom.

After Cat had made it to the floor next to me she suggested we go ahead and look for the next pitch, we saw a tight looking choke that looked like the way ahead – Cat told me to go through it, after some time wiggling and thrusting culminating in me doing a handstand on the lower passage floor and gracefully flopping to my feet as I popped out of the choke I saw Cat’s face grinning from the passage; she had found a way to walk down to it!

We got to the top of the big 60m pitch and clipped into the handline. Zara was a bit iffy about rigging a pitch this hard, and so to save time Slinger decided to rig it. I didn’t envy him that job – the bolts for the pitch were a good length from the edge, you have to swing a few metres out when you put weight on your descender. Nevertheless he did a good job of it and we all lowered ourselves to the bottom one-by-one. The pitch itself is beautiful, a big wide open chamber that you descend 60m into – there was too much to look at.

After sitting at the bottom for a short while, realising there was nothing else to see, we decided to head out. Zara lead the way, followed by me, then Slinger, Theresa and Cat brought up the rear. Zara sped up the 60m pitch, she put a Re-belay in place of one of the deviations to reduce the amount of bounce in the rope at the bottom. I followed Zara up the rope, at a slower pace (I need more exercise). Getting off the anchor and onto the ledge a metre or so to the left was tricky but I managed it! I rushed back through the passage to catch up with Zara – she was waiting at the top of the pitch I rigged. I zipped up the 20m pitch and met up with her. We decided to wait for people to catch up with us, Slinger turned up soon after, it was getting a bit cramped at the top of the pitch and Slinger suggested we go back to the entrance to speed things up. He stayed at the top of the second pitch to wait for Cat and Theresa while Zara and I headed out. The ascension up the first pitch was tiring and very long. It looked like Slinger was some way behind us.

Three Re-belays from the exit I told Zara it was probably best to wait here where there wasn’t a draft to cool us down. She headed up to the final Re-belay while I waited a bit further down.

I was getting very cold.

Zara and I chatted across a few pitches for a while but it was hard to understand each other with the distance and the echo, I wiggled a bit in the tight passage to try and warm up, to no effect.

We waited a bit longer…

I checked my watch. I had been still in the pitch for an hour. I was starting to get very cold and very bored. There was no noise other than dripping – no indication that the other three were even close to catching up with us.

I turned my lamp off to save some light, I didn’t know how much battery was left but I didn’t want them to run out – Slinger had my spares. In the pitch black, complete silence and permeating cold I began to go mad. Every drip sounded like someone coming up a pitch, every scrape of my oversuit against the passage wall was deafening, like someone grinding sand into my ears.

I was going crazy, it was so cold. The only thing that kept me sane was knowing that I had about 20m of SRT to warm me up before I left the cave into the freezing cold and windy valley.

I checked my watch; two hours of staying still, propped up against the wall, clipped into the anchor with my harness cutting into my thighs, a blistering cold freezing me to my core.

When suddenly I heard it. In the distance, at the very bottom of the pitch.

They have taken the rigging down from the second pitch. We have ascended the pitch but cannot hold on for long. The ground shakes, Darren drums… Darren drums in the deep. We cannot get out. A Slinger lurks in the dark. We can not get out… they are coming. They are coming…

I hear Zara’s voice call out from above; “Can you hear that? The banging? It’s like Moria in The Lord of The Rings.”

Could she read my mind? She had heard the sound and thought the same thing as me. I was certain I was going insane.

Now I could hear the others coming up the pitch I felt slightly better. Even if it was a further 45 minutes before they got close enough for us to be heard by them. I called out “Slinger?” he responded with the words I so desperately wanted to hear “Go back to the car!”. I relayed the messaged to Zara and heard her quickly climb up the cinder blocks and out of the cave. As I got closer to the exit I could hear her talking to someone, laughing. Who was up there?

I hauled myself out of the dank hole and she was with nobody, they had left. It turned out that her friend and flatmate from the University of Leeds just happened to be up in the Dales caving in the exact same valley as us. They weren’t even going to CHECC. What were the chances?! We hurriedly descended into the valley. It was very frosty and very windy but we couldn’t get much colder, after getting onto the road we sprinted to the car. I got the keys out of the hidey-hole and opened the boot. We changed in good time and bundled ourselves into the car. It wasn’t long before the rest turned up and we were on our way home.
I checked my watch. We had 15 minutes before our call-out time, Cat stepped on it. However we managed to get lost on the way back! When we finally made it back to the Farm it was 2 minutes before our call-out. But, alas, there was still chilli left!
I learnt how to rig and had a fun time but I also stood still in a damp cave for nearly 3 hours. I guess they kinda cancel each other out. In retrospect I can look back and say it was a good trip but when I was down there getting colder and colder I would quite happily tell you to eff-off if you suggested I ever go down a cave again.
Trip date 15-3-14