So our OLD friend Mr MUSCy Ben has become rather aged in the past few weeks and quite a special party was organised for the occasion. Visions of pipe, slippers, overpriced afternoon tea and scones should be cast aside (despite these being much more befitting celebrations of a fellow of Bens age). Cavers have an […]

So our OLD friend Mr MUSCy Ben has become rather aged in the past few weeks and quite a special party was organised for the occasion. Visions of pipe, slippers, overpriced afternoon tea and scones should be cast aside (despite these being much more befitting celebrations of a fellow of Bens age).

Cavers have an insatiable appetite for the unusual and ridiculous, resulting in the plan of a party in a North Yorkshire mine being masterminded by Hellie and co.

Having not seen folk for far too long, myself and my friend Sam ventured down from beyond the wall for the occasion. Arriving in the car park to see two half barrels of beer brought a wry smile to my face for the memorable evening ahead. To the outside world carrying two barrels of ale into a mine sounds ridiculous. I think the term ‘Fuck it, why not.’ should be used more often to make other things like this happen (would certainly make life more interesting).

After a few moments some more people emerged from a nearby mine entrance and the ~15 strong party was nearly complete. After a leisurely faff (Freshers you will get used to this term!) we all headed out to the Smallclough mine entrance. The plan was to head to the Ballroom chamber to deposit the beer barrels, BUFFET FOOD (of which there was lots) and sleeping gear then have a little adventure. The Ballroom has been used for special functions when the mine carts were still operational and people were pulled through the mine. No such luxury existed for us.

Got to the chamber without too much effort and Ben did the honours of tapping the beer barrel and having the first of many Birthday beers at about 3pm. 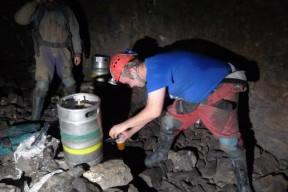 First Birthday beer of the evening.

A few of us pottered off for an explore of the mine which was pretty awesome. These passages are massively extensive (I heard around 200 miles long but correct me if I’m wrong) and mines all look quite similar hence I’d imagine route finding would be a bit of a twat.

Got back to the ballroom where the second group of people were getting all dressed up in shirts, dinner jackets, fancy dresses, high heels and flashing bowties etc! Excellent. 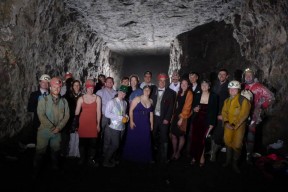 Formal dress for the occasion! 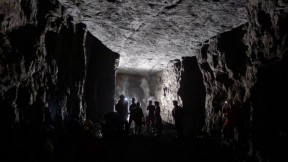 The buffet ‘table’ was laid with a variety of goodies from cold pizza to quiche to cake to party rings, and the beer was flowing nicely! 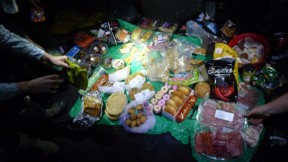 A lovely addition to the evening was the arrival of Bens family who made the evening even better by surprising everyone by entering in formal dress, having secretly changed just outside of the chamber. Some more drinking and dancing followed before the watches said it was eventually time for bed. 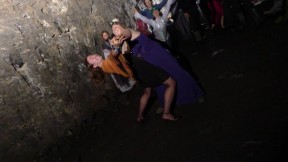 Dancing in the Ballroom… 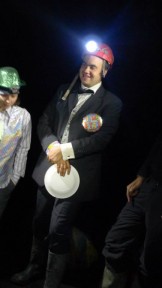 All photos by Evil Jeff.