15-17th Feburary: joint weekend away with YUCPC at Bull Pot Farm. Friday night we arrived a lovely fire warmed room, filled with lots of York members plus MUSCy Ben. It’s fair to say quite a bit of beer was drunk, maybe explaining the toaster swingball game (and subsequent Saturday morning axing). After a dream about […]

Friday night we arrived a lovely fire warmed room, filled with lots of York members plus MUSCy Ben. It’s fair to say quite a bit of beer was drunk, maybe explaining the toaster swingball game (and subsequent Saturday morning axing).
After a dream about drug dealers and aliens I set off to Lancaster Hole to take a trip to Maracibo with Rosie and Karim (YUCPC). All was looking brilliant and we set off first to rig Lancaster Hole, only to find that as soon as I got underground I had a full light failure. Already being at the second re-belay on the pitch I decided just to rig the pitch in the near dark anyway. Karim helped out a fair bit by sprinkling grass on my head. I warned the next team down to double check my rigging and to go ahead. Ade (YUCPC) and Glen offered some suggestions about my light, which after a short trip back to BPF with Rosie worked! We got back to Lancs to see the second team off.

Finally (at 1:45, oops!) we started caving!! I was in charge of navigating to Fall Pot having done that section of cave many times – this time though, I managed to take us a way I had never been before, and was a tad dis-orientated when we got there! That didn’t matter though as we knew we just needed to climb down the Fall Pot boulder choke into the main drain. We ditched our SRT kits and went upstream to Stake Pot boulder choke. The streamway was a little hard going as there seemed to be more water than expected (but no rain was forecast so we were good)! We managed to stay dry above waist height, I was pretty happy, streamway caving is my absolute favourite! It took us quite a while to navigate through Stake Pot boulder choke, we made an absolute hash of it to be honest. On the other side we met Mark S.’s Cow Pot team (surprised to see us quite that late in the day) and then carried on to Oxbow corner to meet Brendan and Sam. We joined forces and went to find Maracibo!

With our team of 5 strong we headed left out of the streamway after Oxbow Corner into floor level crawl that lead into a small chamber, and straight off into a rifty section of cave that turned into a narrow, small stream. Once the passage was blocked with calcite we had an easy climb up a few metres to a slightly higher level. From here was a traverse along a straight rift (the NFTFH description is spot on with the phrase ‘remarkably straight’) called Bloody thigh rift. I found it a bit awkward, Karim and myself seemed to have a few traction issues. Out of the rift goes into a dry section of passage that is much easier, stompy, and lot’s of pretties started appearing! We followed the description through a flat out section into an opening and the start of Tortuga way.

Here we sort of split up, as me and Karim fancied playing camera (and flat out misery) whilst Brendan, Sam, and Rosie fancied doing the grim section to the end of Maracibo. Karim and myself ate a feast of Bounty and jelly whilst I took snaps of a pretty crystal pool with some ballerina formations (at the end of a short crawl up from the passage at the S bend) We had a nice natter and catch up (longer than we realised) before heading back. FYI: Karim’s head doesn’t make a good tripod! 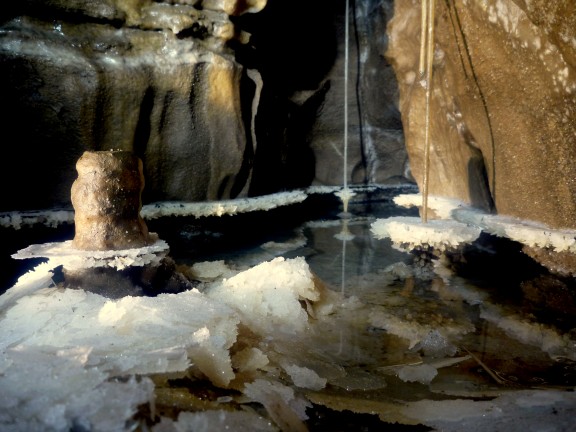 Ballerinas dancing in a crystal pool.

The streamway on the way out was a lot easier going, the water seemed to do most of the work for you, although we did both end up neck deep in a big pool! Oooops, wet! There were no navigation issues through the Oxbow corner and Stake pot boulder chokes and before we knew it we were back in Fall Pot. Once we climbed up out of the main drain we heard Walmsers, and after a few excited shouts we carried on out to meet their team at the bottom of Lancaster. We headed back out to a wonderful (and plentiful) Spag Bol, followed by Rosie, Brendan and Sam a few hours later (as expected).

No toasters were destroyed that evening.

Sunday I fancied doing Link, but after not quite realising how far the in to system the nice bit of Serendipity is (mainly cos the nice bits seemed to be named something different and at the bottom of the pitches), and no realising we needed spits, that plan changed. So, myself, Rosie, Walmsers, Toby (YUCPC) and Jo (YUCPC) headed down Bull Pot of the Witches, and free climbed down to the Gour pools. After some wriggling and camera faff we headed back out to the surface, I had a little bathe in the stream, we did a bit of cleaning and boiled some eggs. 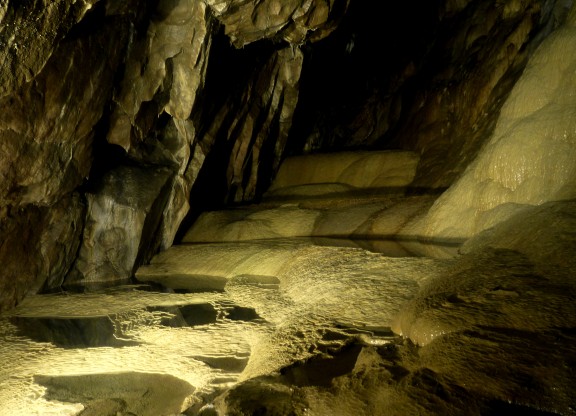 Gour Pools in Bull Pot of the Witches

I took some boiled eggs (in my trouser pocket) for snacks on a walk down the the stream. Given it was such a lovely day, I was glad the Link plan failed, might have got a bit of vitamin D! To quote Walmsers whilst leaping like an Impala ‘Oooo walking is so much nicer than caving’. We had a play about and did some bridge traversing before returning to BPF. 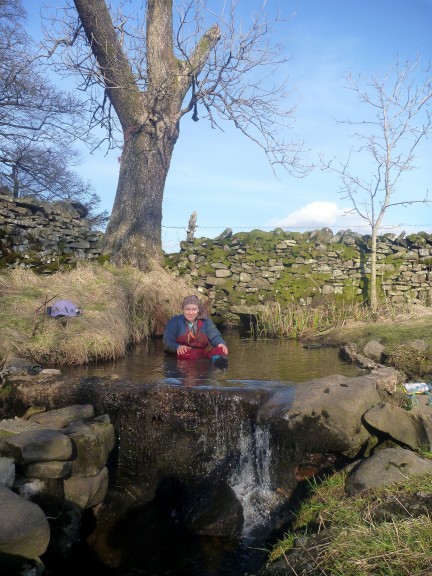 I fried 18 eggs for hungry cavers, we all ate a lot of bacon and drank a lot of tea before heading back to Sheffield for curry and Lord of the Rings with my housemates. What a fun joint weekend, plenty of inter-club trips/bonding, lovely trips and even some sun!