This is my first trip report from ‘beyond the wall’ and no I’ve not been got by the white walkers yet (10 points for anyone who gets the reference). Unfortunately, this was the same weekend as the SUSS / MUSC weekend in the Dales so I had to pick. As this was my first opportunity […]

This is my first trip report from ‘beyond the wall’ and no I’ve not been got by the white walkers yet (10 points for anyone who gets the reference). Unfortunately, this was the same weekend as the SUSS / MUSC weekend in the Dales so I had to pick. As this was my first opportunity to get down some Scottish caves I figured I would leave the Dales for another weekend.

The opportunity arose to visit the little known caves of the Appin area of Scotland with a few of the Grampian Speleological Group (GSG). Appin is a small patch of limestone in the Western Highlands just south of Glen Coe. 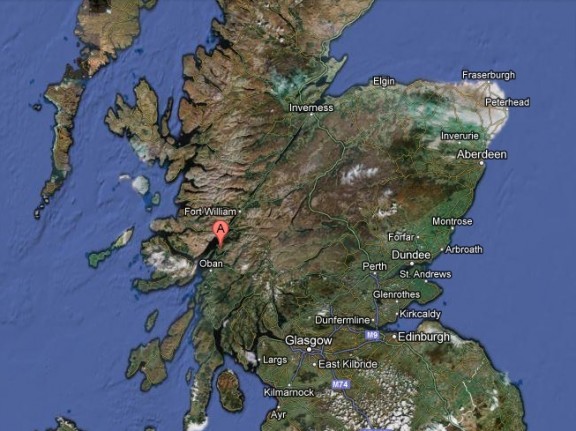 We were staying in a cottage in the village of Kinlochleven at the head of Loch Leven which one of the GSG members brothers had kindly lent us the use of for the weekend. On arrival, Tam and Adam were waiting with a ‘roaring’ fire and the smell of Saturdays tea being cooked. Excellent.

Beer was drank and Ross (of Harry Potholer and the Speleologists Stone fame – http://www.youtube.com/watch?v=HL-cYU74ujE Also features our very own JEFF WADE playing Ron. With superb fetching outfits from Imo and Mark Brown. Fantastic.) bought out the 12 year old single malt whiskey which believe it or not was my first proper ‘wee dram’ since moving up here!

Contrary to pathetic England and its rain, Scotland excelled itself with a lovely day perfect for wandering the hill and popping down various entrances in Glenstockdale. Could even see the snow capped tops of the mountains in the background. We each hauled some old metal fence posts up the hill to shore up the entrance to ‘Midge Feeder’ which was apparently just that back in summer. I proceeded to drink from the furry cup and looked like a 10 year old girl throughout the day.

There are a few small caves out there and there’s still plenty of potential for finds. Essentially, a trait of Scottish caves is that they’re short, sharp and tight. The location definitely makes up for it, as the next picture shows! We were treated to a lovely sun set over the sea and the mountains too. 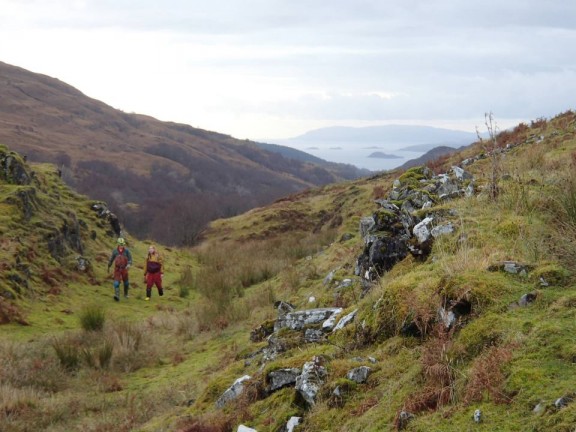 The next stop was to Hugo Boss which was a recent find by Tam and co. It even got BBC Scotland coverage a few months back. Keeping with apparent tradition Tam squirted himself with some Hugo Boss and proceeded to worm down the entrance. A cracking little find!

We stopped at the Clachaig Inn for a beer and took it in turns to melt by the log burner whilst Amber proceeded to film random people and a speech about SCRO by Derek who was the only real Scottish person on the weekend. Ya ken?

The next day we went to a forest in Duror which we walked up to get to Hibernian hole and Draft Caledonia. Hibernian Hole had an actual pitch in there (shock horror!) which meant that we couldn’t head any further than the entrance crawl really. Derek informed us that it was a hell hole as the bottom section is essentially just a boulder roof beneath the surface stream above. That’s one thing about Scottish caves that people should be wary of. Unlike most English caves which are well travelled, in Scottish caves precarious big rock are still perched on ledges waiting to be knocked off and not every hand hold / foothold has been tested to buggery with years of wellie boots, so expedition like caution is a must. I found this out when in Hugo Boss when a seemingly firm big hand hold just ripped off when I pulled on it (I’m THAT strong obviously).

Draft Caledonia was a fantastic little stream cave with some of the nicest limestone I’ve seen. Completely blue with untouched striations and projections making it quite snaggy. I think I’ve got another rip in my oversuit actually. This cave, in my eyes, holds the title for the most amazing view from the entrance ever! The picture doesn’t do it justice. 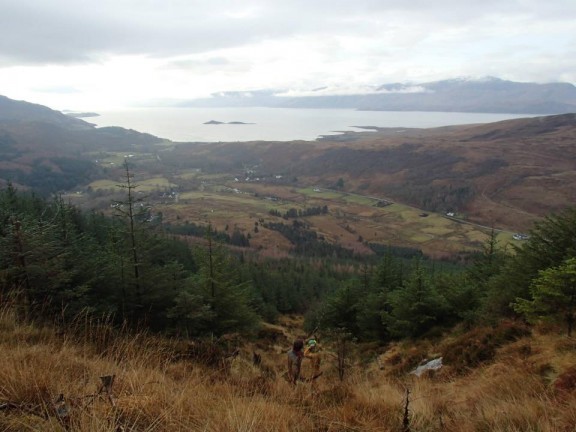 Anyhow, I recommend everyone should visit some Scottish caves at least once. You might not get a 6 hour trip with ropes but you get views unparalleled anywhere in England! There’s also the option of going up real mountains in the snow too!

I still miss Derbyshire though :(.

Thanks to Tamlin for photos and organising the weekend along with a lovely tea!