The week-end started with a long but easy drive up on Friday night, we arrived at the YHA Coniston just after mid night, in time to join in with the games and a late night to bed.   The Saturday started in high spirits. After planning two separate trips, one down Paddy’s to Hospital level […]

The week-end started with a long but easy drive up on Friday night, we arrived at the YHA Coniston just after mid night, in time to join in with the games and a late night to bed.

The Saturday started in high spirits. After planning two separate trips, one down Paddy’s to Hospital level and a second down Flemings to Taylor’s. A short tussle ensued over who would get the good ropes and who you get the stupidly long ones, (I reckon the fleming team won).

Having sorted the ropes we all setoff for our mines. 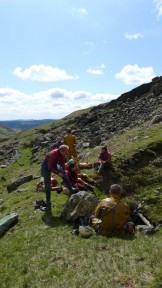 The team getting ready to enter flemings adit (photo by Jeff) 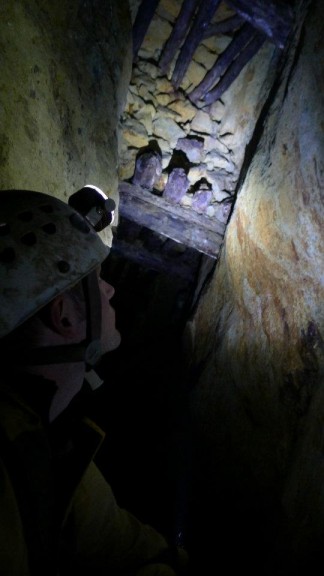 Jeff looking at the stacked deads in Flemings (Photo by Jeff)

After a short walk up the hill to Fleming’s. We entered the top level adit (waist deep with water). And proceeded to the pitch series. This is a fairly loose mine and you walk under a number of loose looking stacked deads, unfortunately the floor is equally bad you just can’t see it :/

We moved gently and carefully down the entrance pitches mindful not to dislodge anything.

Reaching the bottom we saw the first signs of blue copper formations. Keen not to hang around in loose sections of the mine for too long we moved on past some collapses in the floor and some flooded sections. We passed some large holes in the floor some flooded some very deep, a few more blue formations and some fury ones too. Arriving at the traverses, a series of very large loops designed to be stood in making for easy progress. As we waited for the later half of the party to catch up with posed for a few photos. From here the exit wasn’t far, just over a pile of boulders down into a lose pit and through a small crawl, and we were out into the midday sun. 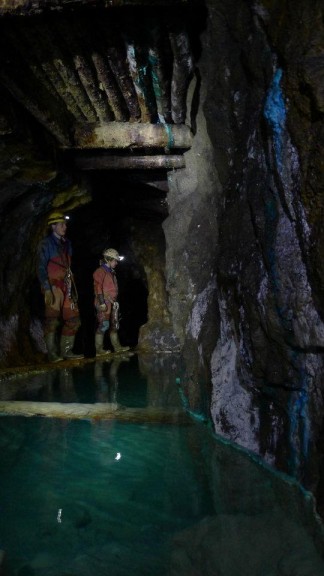 From here a few of the party opted to return to base to spend some time on the surface, while a smaller contingent decided there was ample time to go and do the other mine now that it was rigged.

So we contoured round the mountain and up to levers water and into the top level entrance.

By comparison this is a much stabler mine and much more frequently travelled, including new stemples and steal cables. We proceeded through at a steady pace with some short detours to see the amazing blue veins of coper, taking a number of photos.

Arriving at the bottom level you meet the old railway which runs straight into the mountain in an amazingly straight line. We explored a few of the side passages and slowly made our way out and back to the YHA for about half five.

Having spent the day underground I needed to get out for a short run and the “Old man of Coniston” was looking very appealing. After securing permission to go for a run, under the condition that I was back for 7.15 no later (or I would be in trouble). I set of at a steady pace. In order to save time and not being one to use paths, I took the direct route straight up the East face through the grassy crags emerging 40minutes later on the Summit. Just in time to see the sun heading west out over the sea and views north to what was once my home and the familiar summits of Wasdale and a brief flurry of snow flakes. It was time for a neck breaking descent. Across loose slate and grassy slopes, to arrive back at the YHA in just over 15minutes. A cracking run and a great way to end a nice day. And perfect timing for the dinner.

Unfortunate being a returning Suss member I was forced to follow up an otherwise nice meal with the “Condiments race”. This was a delicious mixture of ketch, mayonnaise, vinegar, butter and other things I’d rather not remember. Some of us were able to stomach them better than others, though seeing Sam’s determination to finish despite throwing up twice was priceless. Unfortunately I was beaten by Dave, and I will have to live with the shame of this for the rest of my days 🙁

The awesome awards followed, with some great talks from Jeff, Tom & Rosie. And a great evening Suss singing and drinking.

The next day was a surprisingly quick start for a Sunday (helped by the fact we had to leave the YHA by 10 and the efficient cooking of the young ones).

As I was now a local expert on the local mines (having visited both of them the previous day), I volunteered to lead a quick party down paddy’s to hospital. This consisted of myself, Sam and Neil. With this fit group we marched to the top and practically ran down the mine taking short detours off route to view the blue coper and the various deep shafts, good fun my kind of caving.

Leaving the other two at the exit of the cave, I set of for trip #2 of the day, a solo derig as no one wanted to come.

All I will say about the second trip is that Taylor’s to Fleemings level was derigged.

On the way back from Flemings I ran into a local group of mine explorers and spent an hour discussing the various mines and digs they had done as well as hearing a few tales. All very insightful.

As the day was still young and having failed to do a long run the previous day I decide that would be next in line. So I got ready, and just as I was about to leave, Dave, Ally & co arrived and informed me that the other derigging party down paddy’s hadn’t returned yet. This was a bit surprising given the time, so after a short discussion it was decided that I would go into the bottom level and check that they had at least found the first rope up.

Having changed out of my caving kit I couldn’t be bothered to change back so instead I put my wellies and helmet back on and ran in the lower level in my running kit. 5 minutes later I was at the foot of the pitches and relieved to see the ropes were gone (they had at least got this far).

I gave a quick hello shout just in case, and was about to head back out when I got an answer. After a very difficult conversion from 2 pitches away I managed to establish that they had made it to the blue rock and couldn’t find the way on. I managed to convey the idea that they had to climb up onto the stacked roof to find the rope. And told them I’d go round to the top and start coming down to meet them to ensure they didn’t get delayed any further.

So I ran back out the mine, back to the car, grabbed my SRT kit changed my wellies back to my fell shoes and ran to the top entrance. Got to the entrance and shot down to the first rope, where I found scot. Unfortunately for him, he had to surfer the rather unpleasant sight of me in my running kit. Though it was good timing, I took them the rest of the way out and returned back to the cars.

It was now getting on for four and my running plans had gone a bit astray but I wasn’t going to be defeated that easily. So I altered my original ambitious plans. And from the YHA I went East round the backside of Wetherlam and onto the summit, then West onto Swirl How and Great Carrs and then along the ridge to the Old man, followed my a scree descent of the side of raven Tor and finally back to the car some two and half hours and a thousand meters of ascent later. Decently worn out.

From here I had the fun drive to the YSS. I at the hut arrived walked in and no Suss, and then realised I’d driven to the NPC not the YSS, derrr, brain wasn’t working by this point. So tried again and drove on to Helwith bridge and the real YSS. And finally meet up with the others in time for some late steak and ale pie (very nice).

This was followed by a subdued night at the YSS as everyone was tired either from lots of climbing, walking, caving or running.

Monday, morning arrived to see a lot of sleepy people, so a Bernies trip was first on the cards. We paid lots of money for some nice breakfast. And some bits of rope, and set our sights on a short trip down Ireby.

Ireby Cavern is a nice Yorkshire pot, a series of about 4/5 nice pitches. A bit of crawling and some nice rift passage. Unfortunately a slight miscalculation in packing the bags meant we were short of a 35m rope, so some creative rigging using a 20m rope was called for and we got down the last pitch and were able to visit the final sump. Then we all headed out with Dave derigging. Unfortunately for Dave just as he got to the entrance drum, the heavens opened and this large quantity of warn rather feet smelly water greeted him. (Some people have rotten luck).

We returned to the cars and drove back to Sheffield.

And thus came to an end the great Suss annual dinner week-end. Role on 2013 it has much to live up to and I’m sure it will.