“Shit, there’s a tree in the road!” Dave exclaimed as we were driving to the YHA Coniston Coppermines. As well as tree roots growing into the roads around Lake Windermere, the roads were very twisty; we realised that if there was a sharp bend sign that meant the bend was actually less than 90º, otherwise […]

“Shit, there’s a tree in the road!” Dave exclaimed as we were driving to the YHA Coniston Coppermines. As well as tree roots growing into the roads around Lake Windermere, the roads were very twisty; we realised that if there was a sharp bend sign that meant the bend was actually less than 90º, otherwise there would be a sign every 20m. We finally got to the hut at about 10pm and had a nice relaxing evening.

When we woke up on Saturday morning sun was shining through the curtains. It was going to be a good day. After a tasty breakfast everyone decided what they wanted to do. A group went down the mines, and everyone else thought the weather was too good to go underground so went mountain biking and climbing. Me and Dave went for a walk to explore the local environs since we forgot to bring our climbing gear.

We walked up the path from the hut to the lake at the entrance of Paddy end just in time to see one of the caving groups all pile in. Around the lake, and up towards the ridge, then along the ridge to the peak of Old Man Coniston. The weather was so sunny I burnt the back of my neck. Walking down was harder than I thought it would be, the path was made up of lots of loose stones, which didn’t seem to affect the fell runners who were racing down it. We saw some cool mining things on the way down. 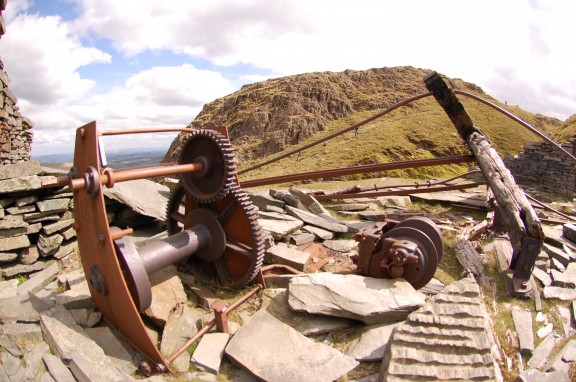 After walking down and into Coniston we had a much needed cake and ice cream and then walked back up to the hut.

We donned our fancy clothes for a tasty supper in the hut, and then the evenings entertainment begun, starting with the condiment race. This year was an addition of butter, salt and pepper. Dave Catell won, and after throwing up twice Sam managed to finish. Rostam presented some amusing awards and then we faffed for a long time with the union projector which refused to work. So huddled around laptops we listened to presentations on China by Tom, Expeditions and Switzerland exped by Jeff and Morocco by Rosie.

Scott, Alisa and me went to de-rig the mine the others did as a through trip (Paddy end to Hospital Levels) so we went in the exit and worked our way up. Up the wooden ‘ladder’ which had half rotted away removing half the rungs, over many false floors and up two pitches we made it to the big blue rock. It was very impressive, with some cool blue stals. 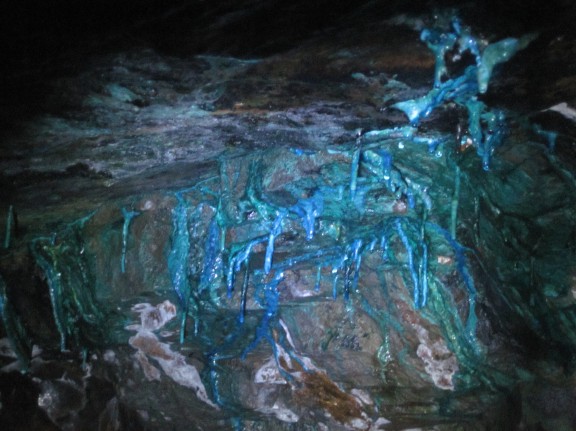 We took a right at the blue rock and along a very cool passageway. There were lots of big drops down with rotten planks of wood over them to walk along, a very cool blue pool of water reminiscent of Mandale Mine. We reached the end where there was another false floor up and underneath this was a very white pool obviously not disturbed so we turned around, a bit confused as these were the directions we’d been told.

We went back and took the first left at the boulder to see what was that way. There was a short piece of rope, with half of the wall composed of rocks stacked ontop of each other and not looking very stable. Scott went up to see what was at the top and I followed up. It was nice to see that the rope was hanging off a decaying stemple with no backup. That was didn’t look too promising so down the rope we went. I had to down prusik because there was no slack in the rope to connect a rack to; the choss in the chamber at the top had fallen down and secured the bottom of the rope.

There was one more passageway to try; after a while the passageway ends with a big drop, with a death traverse on the wall going into another bit of passage. Instead of being like a normal traverse, this one was made up with big loops of rope to stand in. It doesn’t sound too difficult, except for the fact that the bolts were either rusty or loose, and parts of the rope were mouldy. The drop below us was immeasurable; the rocks which dropped down took a good 20 seconds to fall, and the thud they made when hitting the bottom was thunderous. Alisa went across first and checked out the passageway to see if it could be the way on. It went quite far, and we reasoned that this death traverse wouldn’t be there if it wasn’t the way on, so we crossed. After a bit of walking we came to the end, where there was a hole in the floor and a ladder about 20m down. Nice to know what we had been walking on dropped down that far! There were no more ways on, so we reluctantly went back over the traverse and back to the blue rock to have a think.

At this point we heard a voice from below. Brendan had come in the exit to call up and see where we were as we had supposed to only take a couple of hours in the cave and be out in time to get Tom2 to the station in Sheffield to catch his train. We heard ‘Blue Water’ and ‘Upwards’ and so we headed on up the first passage we went down, and Brendan went to the entrance to meet us at the top of the ropes. At the blue pool we went up one of the false floors which continued upwards for a bit, but then stopped with a big drop, where you could see the passageway continuing below. At first we were baffled, no way on but going down and along the way we had come, but then we spotted Sema’s tackle bag on the floor above the main passageway. Heading down, along the passageway and up a ledge (which was very not-obvious the way we were going) got us to the tackle bag and the last two pitches.

Brendan met us at the top of the last pitch and then I went out with him while Scott waited for Alisa to de-rig. I walked down the hill with Tom2 and Ed who had waited at the top, and Brendan went in again for Scott and Alisa. Once they were up, the plan was for Brendan to run down the hill with Alisa’s car key so I could get dressed and then leave quickly in Dave’s car with Tom2, Ed and Sema and hopefully get back in time for Tom’s train at 7:15. It was going to be close.

Only a minute or so after I’d taken my oversuit off we saw Brendan running down the hill, which was pretty impressive to watch. Commenting on the b-line he was making towards us, Ed said ‘Oh no, he has got to a cliff bit…..which he has just run down’. In about 5 minutes we were dressed and on our way.

Things seemed to be against us when a rock hit the underside of the car and the engine light came on in the dashboard. After checking it out and not seeing anything visibly wrong we decided to just head home and hope nothing stops working on the way.

With some interesting conversations, no heavy traffic, one car crash onSnakePassand no more tree roots, we got to Sheffield train station at 7pm, and a very relieved looking Tom2 went to catch his train on time.

All in all I think it was a very fun weekend, lots of different things for people to do and everyone seemed to have fun. Thanks to everyone who came and made it as fun as it was.