I went in Flood with Tom1, Tom2, Chris, Ed B and Andy. The first couple of pitches were quite small and then there was the big pitch which was very fun; big deviations to swing to and a pendulum end. We bumped into Rostam, Neil and Tim, Dave and Sam, and picked up Conor and Sema and heading to the main chamber.

There was more water coming down the waterfall than last time; the whole of the entrance hole was full of water. After having a wander round, Tom took a photo of us and then we headed out.

At the bottom of the big Flood pitch there is a ledge you walk around to get to Bar. Tim, Rostam and Neil were still there, waiting for a team in front of them to go out and de-rig. They told us how Sam and Dave had stood under the waterfall in the main chamber, and right on queue Dave and Sam appear from their explores, shivering. They were also covered in mud, having had a big mud fight with one another. 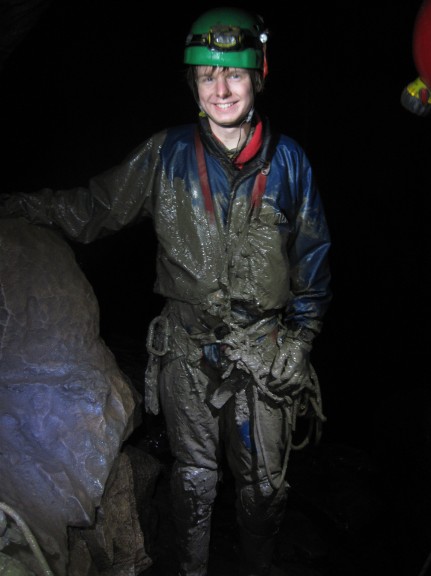 We decided it would be quicker for Sam and Dave to come out with us rather than them waiting for this other team to finish. Bar pot was nice and easy- 2 pitches, although the top of the last pitch was very awkward.

When we had all climbed out of the entrance we headed off down the hill. It was nice that it was still light, only getting dark when we were about half way down the hill, which made for a very pleasant walk down.

Me, Rosie, Ian, Tom2, Ed B, Sam and Dave went down Simpsons. We split into two teams to make it faster, so Tom2, Ed and me started up the hill first. Found the cave with no difficulty and started to head down. On a couple of occasions the karabiner must have twisted meaning we couldn’t pull the rope through, so Tom prusiked up to fix it.

As we got to the sump with the duck on the right I went first. Thinking it would be shallower on the other side I went to put my hands down on the floor. Being deeper, they didn’t reach and I ended up just floundering around for a while. After we were all through, we were all very cold, so we progressed quickly onwards.

The other team caught up with us at the top of the last pitch. Dave was “helping” people through the slot, which I don’t think helped them a lot, but did provide amusement for the rest of us.

The streamway to get to Valley entrance was as fun as always, and we had some fun splashing around and wishing we had a rubber dingy. After the short prusik and more crawling through cold water daylight appeared. We found a Brendan at the top, who was too big for the cave he went down so was waiting for Sam to come out with his car key, so he could go down another cave and get a trip in.

After the second team appeared, Brendan got his key and ran to his car, and Sam and Dave chased after Ed to get his collar bone. Upon catching Ed behind a big rock, they pounced on him in quite a dodgy manner. Meanwhile, me and Tom had a welly water fight, which I think I lost due to getting quite a lot down my back.

Brendan decided on going down Swinsto, and Dave and Sam joined him. So eager to get caving, Brendan started running up the hill, with Dave and Sam trailing behind.

We were all changed and so it was homeward bound, after a fantastic weekend.