First of all I have to say thanks to Rosie for organising this holiday which has been immense fun and quite eventful. So on Friday the 17th myself, Chris and Sema set out from Sheffield to begin the adventure. Not surprisingly it didn’t take long for Sema to fall fast asleep in the back of […]

First of all I have to say thanks to Rosie for organising this holiday which has been immense fun and quite eventful.

So on Friday the 17th myself, Chris and Sema set out from Sheffield to begin the adventure. Not surprisingly it didn’t take long for Sema to fall fast asleep in the back of the car and left me n Chris to it with Chris taking the first stint at the wheel. 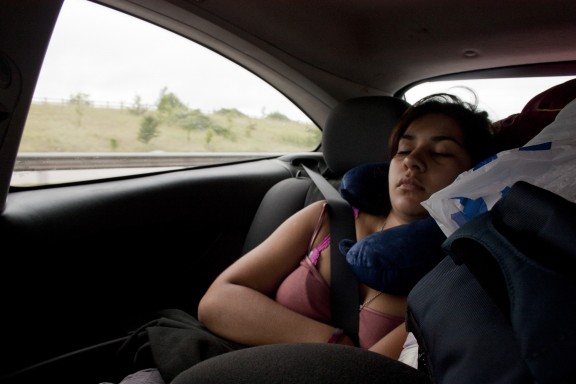 We arrived at Dover in good time only to discover that our ferry booking had mysteriously been deleted! Fortunately I had remembered to bring the booking reference so after some faff we managed to leave the UK.

Following an uneventful crossing we swapped driving responsibilities and struck out into France. We were relatively thankful for the less than perfect weather due to the lack of air-con in the car but a little more sun en-route would have been nice.

Our first night was spent south of Rouen next to a lake which we decided not to swim in as it wasn’t exactly warm. The morning greeted us nice and early and with mild disappointment at the local creperie only being open in the evening so we set off towards the campsite near the PSM.

The days driving didn’t go quite to plan when we decided to try and use a non-peage route but were foiled by some lazy french bikers who had given themselves the day off and gone on strike. Not only were they being lazy gits they had also decided to blockade the slip-road on to the exact road we had decided to take just outside Le Mans. Bastards!

After our impromptu detour through the outskirts of Le Mans we eventually got back on route after getting to drive a small part of the famous circuit. The drive went smoothly again until we had a second encounter with the bikers who had taken it upon themselves to delay everyone on the Bordeaux ring road by driving at about 10mph (16km/h if you’re feeling continental). Still we eventually got past the lazy bikers and made good time arriving at the campsite in Sainte-Engrace at around 6.30 to be greeted by Rob and Hannah alone in their van. 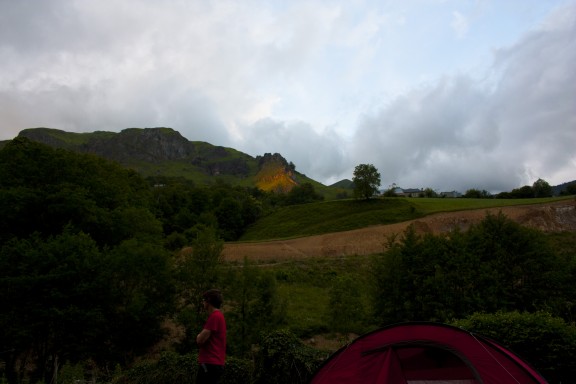 All of about half an hour later the others all arrived in convoy feeling fairly worn out from their 2am ferry that morning, bed was beckoning to us all.

Our first morning at the camp was largely spent deciding how to go about our main objective for the holiday, La Traverse de La Pierre-Sainte-Martin. Eventually we decided that we should at least find the entrance to the cave so a couple of car loads of us met at the track up the mountain after a token effort at climbing and a light lunch.

5 hours later and we’re still wandering round the top of a very big hill at 1700m in blazing sunshine. Unfortunately I had apparently spent most of the time facing more or less the same direction so half of me was quite sunburnt. On the plus side there were some truly spectacular views from the top where our instructions, of “the entrance is after a steep climb neat three small pines” had led us.

At around 5.30 we decided that one car load of us should head back as we were getting quite tired, hungry, dehydrated, sunburnt and bored of playing rock pigeon. As we were walking back down the hill someone noticed a rather large cairn about 20m off the track near a cluster of 4 or 5 small pines so we thought we should investigate. Surprise surprise it was the entrance. Blatantly obvious yet somehow we’d all managed to walk straight past it 5 hours earlier without even noticing convinced we should be looking further up the hill.

Rejoicing we all headed home for a few hours (or just two for the rigging team) kip before the teams headed back up to begin the truly epic journey through the cave.

Here it is probably best to read one of the hopefully numerous accounts of the trip itself as this will be long enough as it is and each team has their own tale to tell.

After dropping the last two cars off at the exit I finally got to bed at about 5.30 am a full 25 hours since I woke up to be woken firstly at about 7.30 by the return of the last teams and then at about 9 by the sun making the tent insufferably hot.

After slowly, very slowly dragging myself from the tent and eventually making it to the shower we all spent the morning doing little more than napping by the river drinking beer and recovering from a fantastic, if briefly mildly hypothermic, trip. 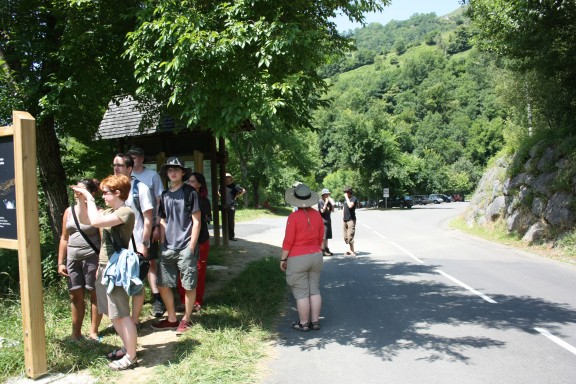 But with a bunch of relatively active people, after a morning of not doing much people were getting restless so we went touristing down a rather beautiful gorge. 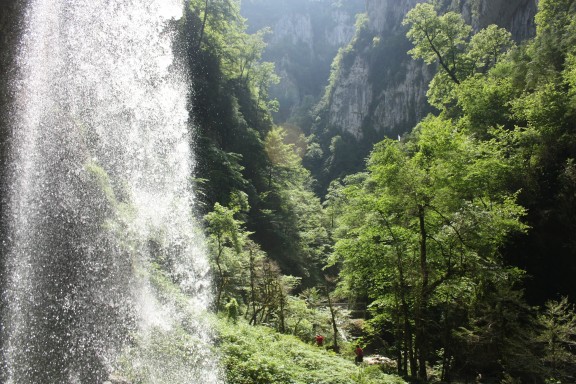 All nice and rested and recovered the following day a team went up to de-rig the entrance while the rest of us went in search of a cave that was meant to be like canyoning underground. Armed with a trusty description we went in search of this cave that was about an hours drive away after a detour via a local brewery to acquire some tasty beers. Rather unsurprisingly we managed to arrive at somewhere that wasn’t the cave and after a while of searching and driving down a muddy track in the rain we came to the conclusion that we probably weren’t going to find the entrance and even if we did it would probably be too wet anyway.

So, no caving done we turned about for home but after not too long we were distracted by a sign for Fromage. Some minutes and some euros later we left the small farmhouse with 100% more cheese and sausage than we’d left camp with and drove back to camp, down some nicely unsurfaced roads in our case thanks to some dubious sat-naving by my passengers.

Home in one piece after some dinner the bar happened, or at least for some. Unknown to us during the day disaster had befallen the de-rig team as on the drive up the track to the cave Rosie’s poor car had been viciously assaulted be a large rock which decided to put a nice big hole in the petrol tank and pull bits off the gear box. Consolation beer was much needed.

So, cave number two, Lonne Peyret. Myself, Rob, H and Rosie set out to rig this 500+m deep cave in the morning, but not too early, and headed up the hill into the mist that had descended overnight making the drive up a little slower than usual. A fantastic ropey trip with some fun rigging and a reward of huge stomping passage at the bottom. After a shortish stomp through the bottom of the cave we arrived at the supposedly magnificent streamway which started out as a nice chest deep wading section. Me and rob donned wetsuits and set off to explore the stream. It didn’t disappoint, awesome sporting streamway with some beautiful features. Unfortunately we’d decided not to take our SRT kits with us so we were stumped after about 15 minutes when we reached a large drop. We headed back out fairly quickly and caught up with the girls just before the ropes. Another long trip of about 10 hours but awesome none the less.

Our last full day at the campsite was spent relaxing having a BBQ while Chris, Ali, Ellie and Tom2 went to de-rig the cave we said farewell to Rob and H who had to return to the real world. Followed by a canyoning trip which unfortunately had about as much water in it as if someone hade thrown a pint down and decided that’d do. Still we had a good laugh and headed back to camp for one last night at the bar.

Packing eventually over we all crammed into the three still working cars and with a little sadness at leaving the wonderful, not to mention cheap, campsite with the dog that ate half our food but a lot of excitement, we made our way across the Pyrenees to begin week two of the holiday in the Sierra de Guara.