Come With Me and We’ll go to Heaven Together Since we last joined our handsome duo, tragedy has befallen. The noble steed Tony was kidnapped by bandits and abused before being left to die at the side of a road. when he was finally found he was in a sorry state and could not be […]

Come With Me and We’ll go to Heaven Together 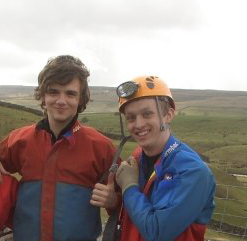 Since we last joined our handsome duo, tragedy has befallen. The noble steed Tony was kidnapped by bandits and abused before being left to die at the side of a road. when he was finally found he was in a sorry state and could not be saved so there was no choice but to put him down and send him to the scrapheap in the sky.

Bereft of their usual mount the pair had to take the slightly fatter steed Bobford. Fatter though he is he did well to carry our dashing duo to their first stop along the way.  Back at the TSG the Little’uns ran in to some other fellow explorers who were also planning a voyage in to the crumbling depths of James Hall Over Engine Mine. In an act of generosity our brave young lads offered to lead the way and set out the route for the other to follow in their footsteps so off they went to in search of Heaven.

Lil Chris had asked to take the lead on this adventure, and Tom feeling a bit lazy as usual was only too happy to consent and gleefully let Chris go down and do most of the work. However it didn’t take too long for him to realise this meant he was going to be carrying the heavier load for most of the journey in.

The trek at the bottom of the first pitch was daunting as they stepped over the gaping chasms in the floor revealing how precarious the surface they were walking on was seemingly supported by thin air in places.

This ordeal over the duo reached the next pitch. And what a Bitch it was. With Chris still in front they descended the tight winding rent in the earth avoiding hazardous rub points and past wiggling bolts that were threatening to pull out of the wall. Chris carried on down with tom close behind straddling above trying not to whack Chris with his bulging tackle sack by holding on tight to his Donkey’s Dick.

Past the Bitch pitch they arrived in the workshop to regroup and wondered what else lay in store. Two ways on down to Leviathan the vast gaping chasm  hidden below. They decided to take the alternative route to try and outwit the slumbering giant they were descending in to, so set off through the hole in the floor towards the next descent.

Down the pitch our intrepid adventurers went hoping the bolt atop the pitch did not unscrew having been unable to tighten it without a spanner, fortunately the bolt held and with a feeling of relief descended through the darkness of that vast shaft to the bottom. The first part of the journey was complete but the adventure was only just beginning.

Off the ropes for the time the Little’uns set off  now only carrying their gear for fighting ropes down the ladder to the boulder choke of doom which is unstable and unfriendly to passing adventurers but with a few gentle words it allowed them to pass unhindered. Past the choke a fast passage of the streamway was only slowed to wonder at what mighty and mysterious powers had silted up the whirlpool to tempt any who pass to walk on its devious surface like quicksand below the surface of the water.

At last our gallant guys reached Block Hall and a 100m battle upwards past deceitful deviations and rotten re-belays. Little did the rope know that the pair were well versed in tackling such challenges and in no time at all had surmounted the task and after a short crawl atop the aven were into the kingdom that links the fabled White River and Heaven.

They had almost made it to their destination. Heaven was within reach. They found the rope that lead to heaven, crystallised in calcite from Heaven. Tom went up first to seek entry. But alas, it seemed fate was not on their side this day as the great cave god denied them passage. Our dashing duet were just too naughty to be allowed in to Heaven. Saddened by their failure Chris tried to find another way in through a passage beneath the rope only to return moments later sodden and dirtied by his attempt.

Disheartened the Little’uns consoled themselves by taking in the wonders of the White River. A mystical formation seemingly frozen in time mid-flow.  Spirits raised by the experience, at their journeys end they turned about and began the long journey back to the land of the light (outside). It had been a long time since their chance meeting in the morn but before leaving the Kingdom the pair met their fellow adventurers once more. They had made it though tired and unsure of meeting their final goal. Not wanting to anger the cave god by remaining too long the Little’uns set off back down Block Hall and back to the bottom of JH. The road back out was a long slog back up the 200m of rope while Tom retrieved the gear as they went. Finally they made their exit after the arduous final haul up the entrance to head back to the TSG in the sunset.